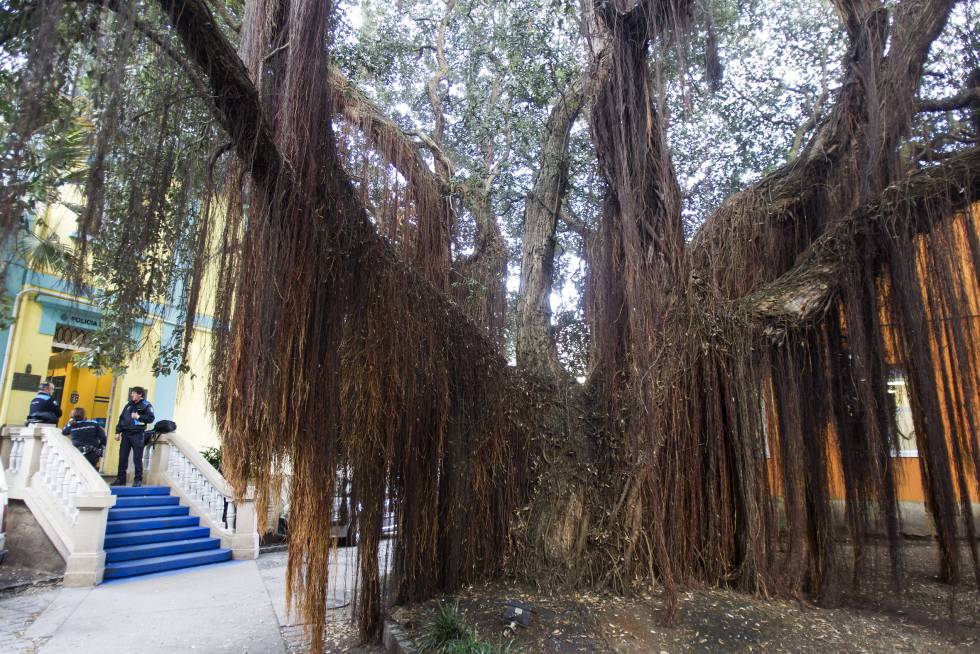 An ancient pohutukawa, a tree native to New Zealand, grows in A Coruña. ÓSCAR CORRAL

A history book suggesting that the Spanish or Portuguese may have discovered New Zealand before the Dutchman Abel Tasman is causing a new stir in New Zealand.
The book Conquistador Puzzle Trail by New Zealander Winston Cowie takes aim at the official story that Tasman was the first to arrive to the country in 1642 – claiming instead that Spanish or Portuguese sailors could have arrived up to a century earlier.
The theory has been included in New Zealand’s official encyclopedia
Around 430 copies of the book, published in English in 2015 and translated into Spanish last year, have been distributed for free in high schools and universities in New Zealand. The volume is presented like a jigsaw puzzle, allowing the reader to piece together the story of the country’s discovery through mysterious elements ranging from old European artifacts found in New Zealand to an ancient specimen of a native Tasmanian tree that grows in northern Spain.
Cowie himself traveled to the Galician city of A Coruña in 2009 and 2012 to research the alleged expeditions that set sail for the Pacific in search of spices in the 1500s.
Some New Zealand intellectuals have dismissed the book, while others have described it as “fascinating.” “This should be mandatory reading for all New Zealand students,” said Michael Muir, the spokesperson of a public center, after reading the book. Renowned New Zealand historians however have warned that the nation should not allow itself to be brainwashed by this theory.
“I want all students to read this and, after becoming teachers themselves, change the perception of the European discovery of New Zealand,” said Cowie on a visit to Galicia. “What’s needed is a major public debate and more research,” he added.

This should be mandatory reading for all New Zealand students
MICHAEL MUIR, PUBLIC CENTER SPOKESPERSON

Cowie and the Spanish Embassy in Spain successfully rallied to update New Zealand’s official encyclopedia. The Te Ara Encyclopedia of New Zealand now lists Cowie’s book in its bibliography and has a section on a possible earlier discovery of New Zealand by Iberian sailors. It reads: “Spanish or Portuguese ships... may have reached, or become wrecked on the New Zealand coast. But there is no firm evidence of Europeans reaching New Zealand before Abel Tasman in 1642.”
Cowie has celebrated the inclusion as a “great result,” particularly since before Conquistador Puzzle Trail was published, the theory that Spanish or Portuguese ships could have discovered New Zealand was considered “radical and fringe.” According to the author, the book has “fired up” friendly debate between New Zealand and the Spanish and Portuguese embassies, which have also applauded Cowie.
The text was translated into Spanish by the Spanish Agency for International Development and Cooperation (AECID) on the initiative of Vicente Mas Taladriz, the business attaché at the Spanish Embassy in New Zealand. According to this diplomat, “the book has started a great debate and not only in the academic world.” Indeed, one of the country’s most popular magazines, The Listener, dedicated its June 18, 2016 cover and main article to the issue. The story by Matthew Wright, titled Arrival rivals, looked at the different reactions to the book, including professor Paul Moon’s response that it was “another step towards conspiracy theories.”
“The book by Cowie has stirred the calm waters of historiography,” notes Mas, “but it has been admitted into the official bibliography on the country.”
Yet the debate on whether Iberian ships arrived in New Zealand before Abel Tasman is not a new one. Biologist Warwick Harris also visited A Coruña in search of clues and in 2009, the magazine NZ Geographic focused a number of its articles on evidence suggesting New Zealand was discovered by Europeans, including a European woman’s skull which dated back to the 16th century.
This is just one of many pieces that makes up Cowie’s jigsaw puzzle. There is also the fact that a tree native to New Zealand – the pohutukawa – has for time immemorial grown in the heart of A Coruña; the discovery of a Spanish helmet in New Zealand; the presence of Portuguese shipwrecks off the coast of New Zealand; the place name Aranga, which exists in Galicia and New Zealand; and certain Maori physical traits that could have be a result of Spanish and/or Portuguese expeditions between 1521 and 1578.
It was precisely this last point that set Cowie off on his research project. A decade before publishing the original version of the book, he was watching a rugby match with his father when his attention was drawn to Paul Tito, a player with pale skin who was in the Maori team. He raised the subject with his father, also a historian, and was told it was “related to the shipwrecks of Spanish and Portuguese ships in the northeast.” It was the first piece of the puzzle, and Cowie resolved to find the rest.
English version by Melissa Kitson.
Publicado por salud equitativa en 7:36