Observations of a Comet’s

First Passage Through the

Comets are our most direct link to the earliest stages of the formation and evolution of the solar system.  Only every few years is a new comet discovered that is making its first trip to the inner solar system from the Oort Cloud, a zone of icy objects enveloping the solar system.  Such opportunities offer astronomers a chance to study a special class of comets.
Onboard NASA’s flying telescope, the Stratospheric Observatory for Infrared Astronomy, or SOFIA, a team lead by Charles Woodward of the University of Minnesota’s Minnesota Institute for Astrophysics observed Comet C/2012 K1 (also called Pan-STARRS after the observatory that discovered it in 2012), searching for new insights into the evolution of the early solar system.
Comets originating from the Oort Cloud, like Comet C/2012 K1, remain unaffected by the thermal heating and radiation processing of the Sun. The pristine nature of these comets can preserve surface materials making them ideal targets for observing gas and dust particle composition.
“Comet C/2012 K1 is a time capsule of the early solar system’s composition,” Woodward said. “Every opportunity to study these bodies contributes to our understanding of the general characteristics of comets and the formation of small bodies in in our solar system.”
The team used short and long wavelength cameras on the Faint Object infraRed CAmera for the SOFIA Telescope, FORCAST, to study light emitting from the comet’s coma: gas and dust that form around a comet’s nucleus as it is heated by the Sun.  The team used the observations to deduce the size and composition of the dust grains and to identify and categorize their thermal properties.
Unexpectedly, these observations revealed weak silicate emission features from the comet, rather than the anticipated strong silicate features found in some prior Oort Cloud comet observations, including those of Comet Hale-Bopp and studies conducted with the Spitzer Space Telescope. By analyzing these silicate emissions and comparing them to thermal models, the researchers determined that the coma’s dust grains are large and comprised predominately of carbon rather than crystalline silicate. This composition challenges existing theoretical models of how Oort cloud comets form.
“Comets are made of materials similar to those of planets, so studying the dust in them can help us understand the content, origin, and evolution of the early solar system, including the process of forming rocky planets,” said Woodward.
While missions like the European Space Agency’s Rosetta mission, or NASA’s Stardust mission provided direct sampling of comet materials, remote observations, such as those conducted aboard SOFIA, provide researchers with an opportunity to understand similarities and differences between different types of comets. 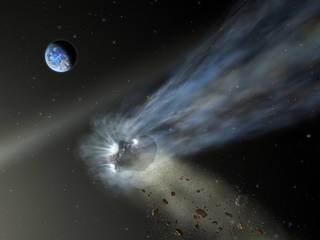 Artist’s depiction of Comet C/2012 K1 (also called Pan-STARRS) and its coma during its first approach into the solar system.
Credits: NASA/SOFIA/ Lynette Cook
“The strength of Comet C/2012 K1’s silicate features observed in mid-infrared with SOFIA have set the stage for what we have proposed for observations using the forthcoming James Webb Space Telescope — to study even fainter more distant comets,” Woodward said. “I think there will be a nice synergy between those two missions, in target selection and targeted follow up.”
This study was published in the Astrophysical Journal.
SOFIA is a Boeing 747SP jetliner modified to carry a 100-inch diameter telescope. It is a joint project of NASA and the German Aerospace Center, DLR. NASA’s Ames Research Center in California’s Silicon Valley manages the SOFIA program, science and mission operations in cooperation with the Universities Space Research Association headquartered in Columbia, Maryland, and the German SOFIA Institute (DSI) at the University of Stuttgart. The aircraft is based at NASA’s Armstrong Flight Research Center's Hangar 703, in Palmdale, California.
Media Point of Contact
Nicholas A. VeronicoNVeronico@sofia.usra.edu • SOFIA Science Center, NASA Ames Research Center
Editor: Kassandra Bell
Publicado por salud equitativa en 12:26