As signal strength improves and data is again captured, IMAGE is not reliably responding to commands.

Since loss of contact on Feb. 24, 2018, IMAGE’s signal has remained too weak to retrieve data.
Just after midnight on May 9, however, Scott Tilley – the amateur astronomer who first rediscovered IMAGE – noticed that the spacecraft unexpectedly began transmitting a strong signal once again.
By morning that day, engineers at NASA’s Goddard Space Flight Center in Greenbelt, Maryland, NASA’s Wallops Flight Facility in Wallops Island, Virginia, NASA's White Sands Test Facility in New Mexico, and The Johns Hopkins University Applied Physics Lab in Laurel, Maryland, had locked on to the signal, and are still receiving telemetry from the spacecraft today.
Commands were successfully sent to IMAGE on May 9 from Wallops Island. However, only a small fraction of the commands sent were acknowledged by the spacecraft. It is unknown why IMAGE did not receive the bulk of them. The spacecraft is still transmitting from its medium-gain antenna, indicating that last month’s attempts to switch to its low-gain omnidirectional antenna were unsuccessful. Since reestablishing contact on May 9, multiple attempts have been made to command IMAGE from the White Sands WS1 antenna without success.
Why the signal faded or why it came back remains a mystery, although current theories include spacecraft attitude drift or thermal effects.
By Miles HatfieldNASA’s Goddard Space Flight Center, Greenbelt, Md.

On April 10, commands were sent to IMAGE to switch from its medium-gain antenna to its low-gain, omnidirectional antenna.
Engineers at NASA’s White Sands Test Facility in New Mexico and at the Johns Hopkins University Applied Physics Lab in Laurel, Maryland, did not detect any changes in IMAGE’s radio frequency signal, indicating that the attempt was unsuccessful.
The command, radiated from White Sands, is part of recent efforts to restore communications with the spacecraft, lost on Feb. 24, by directing it to cast a broader signal that may be easier to lock on to. As the spacecraft remains out of contact, the command was sent “in the blind” — meaning without a return signal from the spacecraft, and so no way to verify with certainty whether the command had been received.
The causes of failure for Tuesday’s attempt are still being analyzed. Another attempt is anticipated after more information becomes available.
By Miles HatfieldNASA’s Goddard Space Flight Center, Greenbelt, Md.

IMAGE’s signal remains too weak to achieve frame lock, which is necessary to retrieve data from the spacecraft. But important steps have been taken this week to be prepared in case of re-established contact.
Last week, the engineers at NASA’s Goddard Space Flight Center in Greenbelt, Maryland, successfully established network connections with both the antennas at NASA’s Wallops Flight Facility in Virginia and at the agency’s White Sands Test Facility in Las Cruces, New Mexico. These antennae are now prepared to both command and receive telemetry data from IMAGE, if the spacecraft is re-contacted.
These preparations are necessary for the team, led by former IMAGE mission director Richard Burley, to attempt to command IMAGE to switch from its current medium gain antennae to its omnidirectional antennae, which has a weaker signal but a wider footprint. The team hopes to be able to lock onto this broader signal, which would lay the groundwork for reestablishing contact, retrieving data and attempting to restore IMAGE to full working capacity.
By Miles HatfieldNASA’s Goddard Space Flight Center, Greenbelt, Md. 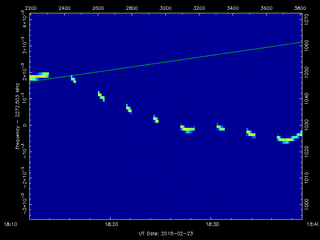 Late on March 4, 2018, personnel at the Johns Hopkins Applied Physics Lab in Laurel, Maryland, reported detecting IMAGE’s signal for the first time after losing contact on Feb. 24. However the signal was too weak to lock on to.
NASA continues to implement an interface with the 18-meter antenna at White Sands, New Mexico, in cooperation with the Near Earth Network, to be ready to command and capture IMAGE if its radio signal returns in a strong enough form.
The precise cause of the signal degradation is still not known, though clues have surfaced that hint at part of the story.
When IMAGE’s radio signal began weakening two weeks ago, it was sputtering in a pattern consistent with the spacecraft’s last known spin period. It is possible that IMAGE’s spin axis had drifted to an orientation where the reach of the antenna’s signal was not on Earth during part of its rotational period, explaining the dropout pattern observed.

On Feb. 22, 2018, the signal from IMAGE began to break up and has been silent since Feb. 24. The team continues to assess what may be the issue, but it is known that this episode does not mimic the sudden silence that occurred in 2005 when contact was originally lost with the spacecraft. The team continues to make preparations to attempt to bring the attitude determination and control systems back online should communications with IMAGE be re-established.

Current information from the IMAGE spacecraft shows that the battery is fully charged, and that overall, the satellite itself seems to be in good shape.  The next step is to attempt to turn on the science instruments – but this could take some time as the 12-year-old software to do so must be recreated.  Additionally, as computers have evolved greatly in that time, work is being done to find a machine that can run the instrument commanding software.
During this process of inspecting the spacecraft, there are several puzzles that the team is investigating to better understand the spacecraft’s health and how best to communicate with it, including:
As we move forward, NASA is starting to recreate a small control center that can generate the commanding needed to better understand and control the satellite.  This will then allow us to gain insights into the state of various science instruments, and see whether any are still functional.  Should any of the instruments be functional, NASA will convene a panel of external scientists to assess the science potential in the context of constrained budgets for operating spacecraft.

New data regarding IMAGE provides some additional — though not yet complete — information on how the spacecraft began to transmit signals again.
On Thanksgiving Day in 2004, the IMAGE spacecraft — at that time still fully functioning — underwent an unexpected power distribution reboot, after which the power returned only on one side — labeled the B side — of the unit. (Satellites are usually built with redundant hardware, often called “A sides” and “B sides.” In the event one half fails, operators can switch to the other with minimal effect to the mission.) Scientists involved in the mission concluded that the A side had failed, and proceeded for the rest of the mission exclusively with the B side.
However, data from today’s telemetry with IMAGE indicate that the spacecraft’s power unit is now operating back on its A side. The ultimate cause of the reboot is still not known, but these recent findings suggest that a reboot in some form has, in fact, occurred.
By Miles HatfieldNASA’s Goddard Space Flight Center, Greenbelt, Md.

The identity of the satellite re-discovered on Jan. 20, 2018, has been confirmed as NASA’s IMAGE satellite.
On the afternoon of Jan. 30, the Johns Hopkins Applied Physics Lab in Laurel, Maryland, successfully collected telemetry data from the satellite. The signal showed that the space craft ID was 166 —  the ID for IMAGE.
The NASA team has been able to read some basic housekeeping data from the spacecraft, suggesting that at least the main control system is operational.
Scientists and engineers at NASA’s Goddard Space Flight Center in Greenbelt, Maryland, will continue to try to analyze the data from the spacecraft to learn more about the state of the spacecraft. This process will take a week or two to complete as it requires attempting to adapt old software and databases of information to more modern systems.

After an amateur astronomer recorded observations of a satellite in high Earth orbit on Jan. 20, 2018, his initial research suggested it was the Imager for Magnetopause-to-Aurora Global Exploration (IMAGE) — a NASA mission launched into orbit around Earth on March 25, 2000.
Seeking to ascertain whether the signal indeed came from IMAGE, NASA’s Goddard Space Flight Center in Greenbelt, Maryland, coordinated the use of five separate antennas to acquire radio frequency signals from the object.
As of Monday, Jan. 29, observations from all five sites were consistent with the radio frequency characteristics expected of IMAGE. Specifically, the radio frequency showed a spike at the expected center frequency, as well as side bands where they should be for IMAGE. Oscillation of the signal was also consistent with the last known spin rate for IMAGE.
To confirm beyond doubt that the satellite is IMAGE, NASA will next attempt to capture and analyze data from the signal. The challenge to decoding the signal is primarily technical. The types of hardware and operating systems used in the IMAGE Mission Operations Center no longer exist, and other systems have been updated several versions beyond what they were at the time, requiring significant reverse-engineering.
If data decoding is successful, NASA will seek to turn on the science payload — currently turned off — to understand the status of the various science instruments.  Pending the outcome of these activities, NASA will decide on how to proceed.
IMAGE was designed to image Earth’s magnetosphere and produce the first comprehensive global images of the plasma populations in this region. After successfully completing and extending its initial two-year mission in 2002, the satellite unexpectedly failed to make contact on a routine pass on Dec. 18, 2005. After a 2007 eclipse failed to induce a reboot, the mission was declared over.
Related:

In mid-January, an amateur astronomer reported they believed they had made contact with a NASA satellite called Imager for Magnetopause-to-Aurora Global Exploration (IMAGE). IMAGE launched on March 25, 2000, and contact was unexpectedly lost on Dec. 18, 2005. NASA’s Goddard Space Flight Center in Greenbelt, Maryland, has acquired time on the Deep Space Network (DSN) to focus on the source and determine whether the signal is indeed IMAGE. This process must take into consideration the vintage nature of the spacecraft, and includes locating appropriate software and commands to potentially operate the mission. We will share more information as it becomes available. 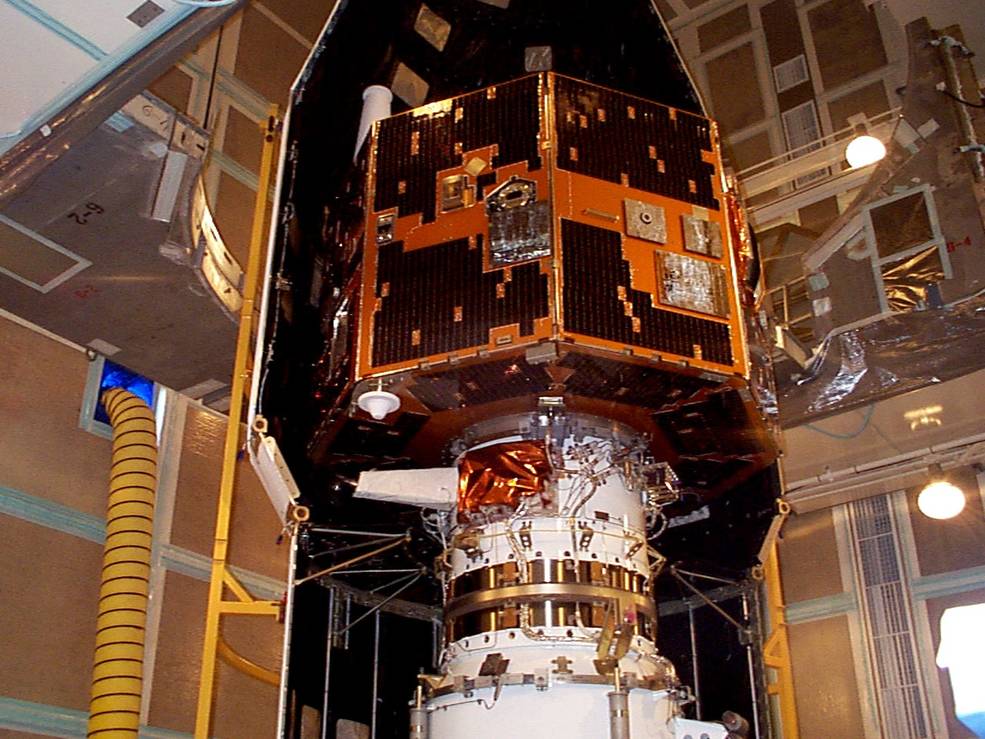