Every single day, many tons of tiny rocks – smaller than pebbles – hit the Earth’s atmosphere and disintegrate. Between frequent shooting stars we wish on in the night sky and the massive extinction-level asteroids that we hope we never see, there is a middle ground of rocks sized to make it through the atmosphere and do serious damage to a limited area. Now, new research from NASA indicates that the impacts of these mid-size rocks may be less frequent than previously thought.
The research revealed that such relatively small but regionally devastating impacts happen on the order of millennia – not centuries, as previously thought. In addition, the new research has pushed forward our knowledge about the complex processes that determine how large rocks from space break up when entering Earth’s atmosphere.
This new research was inspired by a workshop held at NASA’s Ames Research Center in Silicon Valley and sponsored by the NASA Planetary Defense Coordination Office. Their results are published in series of papers in a special issue of the journal Icarus. The theme of the workshop: reexamining the astronomical cold case of the 1908 Tunguska impact event. 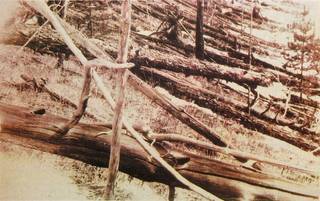 Trees flattened by the intense shock wave created in the atmosphere as the space rock exploded above Tunguska on June 30, 1908. The photograph was taken by the Soviet Academy of Science 1929 expedition led by Leonid Kulik. 500,000 acres, the size of a large metropolitan city, were flattened. Flattening trees requires an immense shock wave. #WorldAsteroidDay is held every June 30 as a global awareness campaign where people around the world come together to share knowledge about asteroids and learn how to protect our planet.
Credits: Wikimedia Commons
Revisiting Tunguska
One hundred and eleven years ago, hundreds of reindeer and a few dozen humans witnessed an asteroid impact – although they didn’t know it at the time. An explosion left a scene in Siberia, Russia, with little evidence of its origin except flattening 500,000 acres of uninhabited forest, scorching the land, creating “glowing clouds” and producing shock waves that were detected around the world. Newspapers reported this may have been a volcanic explosion or a mining accident or – a far-fetched idea – that this might have been an asteroid or comet hitting Earth.
The event on June 30, 1908, near the Stony Tunguska River, continues to intrigue the public and puzzle researchers. The volcanic and mining explanations were quickly ruled out because of the lack of physical evidence. Researchers concluded the blast came from a massive object colliding with Earth. However, not all the evidence fit – no one had pictures of the supposed asteroid, no one found a crater and no one found fragments. The first scientific investigators didn’t even explore the area until the 1920s.
"Tunguska is the largest cosmic impact witnessed by modern humans," said David Morrison, a planetary science researcher at Ames. "It also is characteristic of the sort of impact we are likely to have to protect against in the future."
New Scene, New Leads
Fast forward to February 15, 2013, when a smaller but still impressive meteor burst in the atmosphere near Chelyabinsk, Russia. New evidence to help solve the mystery of Tunguska had arrived. This highly documented fireball created an opportunity for researchers to apply modern computer modeling techniques to explain what was seen, heard and felt.
The models were used with video observations of the fireball and maps of the damage on the ground to reconstruct the original size, motion and speed of the Chelyabinsk object. The resulting interpretation is that Chelyabinsk was most likely a stony asteroid the size of a five-story building that broke apart 15 miles above the ground. This generated a shock wave equivalent to a 550 kiloton explosion. The explosion’s shockwave blew out roughly a million windows and injured more than a thousand people. Fortunately, the force of the explosion was not enough to knock down trees or structures. Per current understanding of the asteroid population, an object like the Chelyabinsk meteor can impact the Earth every 10 to 100 years on average.
But what about the larger rocks that could wipe out a city on a bad day? Researchers have now used these modern-day analysis techniques to revisit the enigmatic 1908 Tunguska event. A long-standing debate about how frequent these events might be is one step closer to being settled.
Extrapolating Clues
Aided by computer resources and the records from surveys of the devasted region made in the previous century, instead of predicting the likelihood of impact rates based on size alone, modelers performed a statistical study of over 50 million combinations of asteroid and entry properties that could produce Tunguska-scale damage when breaking apart at Tunguska-like altitudes.
Some of these new models focused on scenarios that could reproduce the Tunguska treefall pattern plus tree and soil burn distribution. A second looked at combining the recorded atmospheric pressure waves with the seismic signals recorded on the ground at the time.
These new approaches, alongside the validation of the models when applied to the Chelyabinsk event, led to revised estimates of what may have happened on that fateful day in 1908. Four different computer modeling codes led to similar conclusions, strengthening confidence in understanding how rocks break apart in our atmosphere. 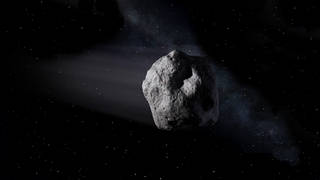 An illustration of an asteroid in space
Credits: NASA/JPL/Caltech
Profiling a Perpetrator
The most promising candidate was a stony (not icy) body, between 164 and 262 feet in diameter, entering the atmosphere at around 34,000 miles per hour, depositing the energy of a 10 to 30 megaton explosion, equivalent to the blast energy of the 1980 Mount St. Helens eruption,  at 6 to 9 miles altitude. When combined with the most recent asteroid population estimates, the researchers concluded the average interval between such impacts to be on the order of millennia – not centuries as had been thought previously, based on prior population and smaller size estimates.
The new result reveals that the probability of an impact occurring on any day in our lifetime, or our kids’ lifetimes, or our grandkid’s lifetimes, etc., is smaller than we previously thought. Still, we still must remain aware of and prepare for the hazard. Asteroids have hit the Earth and more asteroids will hit again. The systems NASA is developing will ensure we can better prepare for and prevent dangerous impacts.
"Because there are so few observed cases, a lot of uncertainty remains about how large asteroids break up in the atmosphere and how much damage they could cause on the ground," said Lorien Wheeler, a researcher from Ames, working on NASA’s Asteroid Threat Assessment Project. "However, recent advancements in computational models, along with analyses of the Chelyabinsk and other meteor events, are helping to improve our understanding of these factors so that we can better evaluate potential asteroid threats in the future."
We are still finding new asteroids and tracking their orbits, refining their impact probabilities and learning more about their makeup with telescopes on Earth and in space, as well as robotic space missions that are studying them up close. Tunguska remains an astronomical cold case, but its mystery is inspiring modern-day investigators to mitigate future threats.
For news media:
For more information about this subject, please contact the NASA Ames newsroom.
Author: Kimberly Ennico Smith
Editor: Abigail Tabor
Publicado por salud equitativa en 14:42