Two sizes of ripples are evident in this Dec. 13, 2015, view of a top of a Martian sand dune, from NASA's Curiosity Mars rover. Sand dunes and the smaller type of ripples also exist on Earth. The larger ripples are a type not seen on Earth nor previously recognized as a distinct type on Mars.
Credits: NASA/JPL-Caltech/MSSS
Full image and caption
Some of the wind-sculpted sand ripples on Mars are a type not seen on Earth, and their relationship to the thin Martian atmosphere today provides new clues about the atmosphere's history.
The determination that these mid-size ripples are a distinct type resulted from observations by NASA's Curiosity Mars rover. Six months ago, Curiosity made the first up-close study of active sand dunes anywhere other than Earth, at the "Bagnold Dunes" on the northwestern flank of Mars' Mount Sharp.
"Earth and Mars both have big sand dunes and small sand ripples, but on Mars, there's something in between that we don't have on Earth," said Mathieu Lapotre, a graduate student at Caltech in Pasadena, California, and science team collaborator for the Curiosity mission. He is the lead author of a report about these mid-size ripples published in the July 1 issue of the journal Science.
Both planets have true dunes -- typically larger than a football field -- with downwind faces shaped by sand avalanches, making them steeper than the upwind faces.
Earth also has smaller ripples -- appearing in rows typically less than a foot (less than 30 centimeters) apart -- that are formed by wind-carried sand grains colliding with other sand grains along the ground. Some of these "impact ripples" corrugate the surfaces of sand dunes and beaches.
Images of Martian sand dunes taken from orbit have, for years, shown ripples about 10 feet (3 meters) apart on dunes' surfaces. Until Curiosity studied the Bagnold Dunes, the interpretation was that impact ripples on Mars could be several times larger than impact ripples on Earth. Features the scale of Earth's impact ripples would go unseen at the resolution of images taken from orbit imaging and would not be expected to be present if the meter-scale ripples were impact ripples.
"As Curiosity was approaching the Bagnold Dunes, we started seeing that the crest lines of the meter-scale ripples are sinuous," Lapotre said. "That is not like impact ripples, but it is just like sand ripples that form under moving water on Earth. And we saw that superimposed on the surfaces of these larger ripples were ripples the same size and shape as impact ripples on Earth."
Besides the sinuous crests, another similarity between the mid-size ripples on Mars and underwater ripples on Earth is that, in each case, one face of each ripple is steeper than the face on the other side and has sand flows, as in a dune. Researchers conclude that the meter-scale ripples are built by Martian wind dragging sand particles the way flowing water drags sand particles on Earth -- a different mechanism than how either dunes or impact ripples form. Lapotre and co-authors call them "wind-drag ripples."
"The size of these ripples is related to the density of the fluid moving the grains, and that fluid is the Martian atmosphere," he said. "We think Mars had a thicker atmosphere in the past that might have formed smaller wind-drag ripples or even have prevented their formation altogether. Thus, the size of preserved wind-drag ripples, where found in Martian sandstones, may have recorded the thinning of the atmosphere."
The researchers checked ripple textures preserved in sandstone more than 3 billion years old at sites investigated by Curiosity and by NASA's Opportunity Mars rover. They found wind-drag ripples about the same size as modern ones on active dunes. That fits with other lines of evidence that Mars lost most of its original atmosphere early in the planet's history.
Other findings from Curiosity's work at the Bagnold Dunes point to similarities between how dunes behave on Mars and Earth.
"During our visit to the active Bagnold Dunes, you might almost forget you’re on Mars, given how similar the sand behaves in spite of the different gravity and atmosphere. But these mid-sized ripples are a reminder that those differences can surprise us," said Curiosity Project Scientist Ashwin Vasavada, of NASA's Jet Propulsion Laboratory in Pasadena.
After examining the dune field, Curiosity resumed climbing the lower portion of Mount Sharp. The mission is investigating evidence about how and when ancient environmental conditions in the area evolved from freshwater settings favorable for microbial life, if Mars has ever hosted life, into conditions drier and less habitable. For more information about Curiosity, visit:
http://mars.jpl.nasa.gov/msl
Guy Webster
Jet Propulsion Laboratory, Pasadena, Calif.
818-354-6278
guy.webster@jpl.nasa.gov
Robert Perkins
Caltech, Pasadena, Calif.
626-395-1862 / 626-658-1053
rperkins@caltech.edu
2016-169
Editor: Tony Greicius

NASA Rover Findings Point to a More Earth-like Martian Past 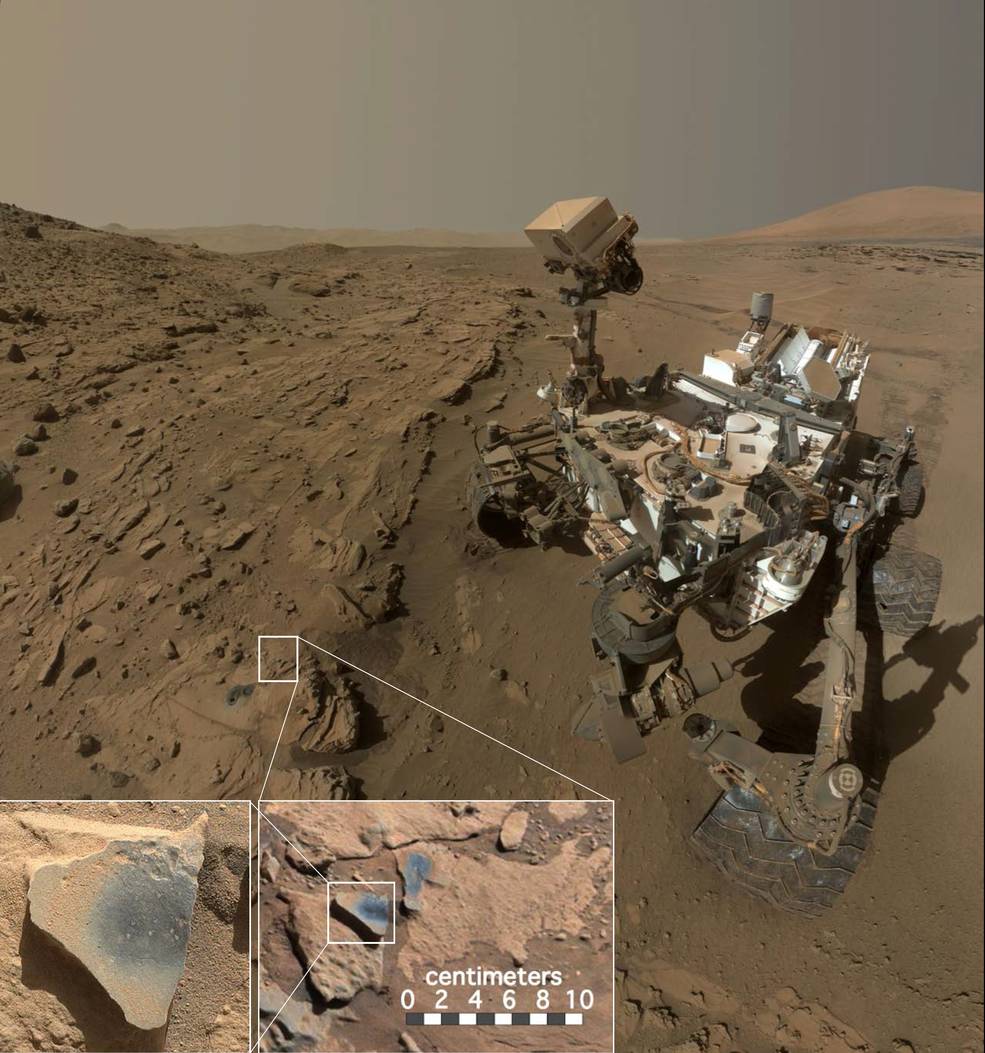 This scene shows NASA's Curiosity Mars rover at a location called "Windjana," where the rover found rocks containing manganese-oxide minerals, which require abundant water and strongly oxidizing conditions to form. In front of the rover are two holes from the rover's sample-collection drill and several dark-toned features that have been cleared of dust (see inset images). These flat features are erosion-resistant fracture fills containing manganese oxides. The discovery of these materials suggests the Martian atmosphere might once have contained higher abundances of free oxygen than it does now.
Credits: NASA/JPL-Caltech/MSSS
Full image and caption
Chemicals found in Martian rocks by NASA's Curiosity Mars rover suggest the Red Planet once had more oxygen in its atmosphere than it does now.
Researchers found high levels of manganese oxides by using a laser-firing instrument on the rover. This hint of more oxygen in Mars' early atmosphere adds to other Curiosity findings -- such as evidence about ancient lakes -- revealing how Earth-like our neighboring planet once was.
This research also adds important context to other clues about atmospheric oxygen in Mars' past. The manganese oxides were found in mineral veins within a geological setting the Curiosity mission has placed in a timeline of ancient environmental conditions. From that context, the higher oxygen level can be linked to a time when groundwater was present in the rover's Gale Crater study area.
"The only ways on Earth that we know how to make these manganese materials involve atmospheric oxygen or microbes," said Nina Lanza, a planetary scientist at Los Alamos National Laboratory in New Mexico. "Now we're seeing manganese oxides on Mars, and we're wondering how the heck these could have formed?"
Microbes seem far-fetched at this point, but the other alternative -- that the Martian atmosphere contained more oxygen in the past than it does now -- seems possible, Lanza said. "These high manganese materials can't form without lots of liquid water and strongly oxidizing conditions. Here on Earth, we had lots of water but no widespread deposits of manganese oxides until after the oxygen levels in our atmosphere rose."
Lanza is the lead author of a new report about the Martian manganese oxides in the American Geophysical Union's Geophysical Research Letters. She uses Curiosity's Chemistry and Camera (ChemCam) instrument, which fires laser pulses from atop the rover's mast and observes the spectrum of resulting flashes of plasma to assess targets' chemical makeup.
In Earth's geological record, the appearance of high concentrations of manganese oxide minerals is an important marker of a major shift in our atmosphere's composition, from relatively low oxygen abundances to the oxygen-rich atmosphere we see today. The presence of the same types of materials on Mars suggests that oxygen levels rose there, too, before declining to their present values. If that's the case, how was that oxygen-rich environment formed?
"One potential way that oxygen could have gotten into the Martian atmosphere is from the breakdown of water when Mars was losing its magnetic field," said Lanza. "It's thought that at this time in Mars' history, water was much more abundant." Yet without a protective magnetic field to shield the surface, ionizing radiation started splitting water molecules into hydrogen and oxygen. Because of Mars' relatively low gravity, the planet wasn't able to hold onto the very light hydrogen atoms, but the heavier oxygen atoms remained behind. Much of this oxygen went into rocks, leading to the rusty red dust that covers the surface today. While Mars' famous red iron oxides require only a mildly oxidizing environment to form, manganese oxides require a strongly oxidizing environment, more so than previously known for Mars.
Lanza added, "It's hard to confirm whether this scenario for Martian atmospheric oxygen actually occurred. But it's important to note that this idea represents a departure in our understanding for how planetary atmospheres might become oxygenated." Abundant atmospheric oxygen has been treated as a so-called biosignature, or a sign of extant life, but this process does not require life.
Curiosity has been investigating sites in Gale Crater since 2012. The high-manganese materials it found are in mineral-filled cracks in sandstones in the "Kimberley" region of the crater. But that's not the only place on Mars where high manganese abundances have been found. NASA's Opportunity rover, exploring Mars since 2004, also recently discovered high manganese deposits thousands of miles from Curiosity. This supports the idea that the conditions needed to form these materials were present well beyond Gale Crater.
Los Alamos National Laboratory leads the U.S. and French team that jointly developed and operates ChemCam. NASA's Jet Propulsion Laboratory, a division of Caltech in Pasadena, California, built the rover and manages the Curiosity mission for NASA's Science Mission Directorate, Washington.
Guy Webster
Jet Propulsion Laboratory, Pasadena, Calif.
818-354-6278
guy.webster@jpl.nasa.gov
Laura Mullane
Los Alamos National Laboratory, Los Alamos, N.M.
505-667-6012
mullane@lanl.gov
2016-161
Editor: Tony Greicius