into the Solar System 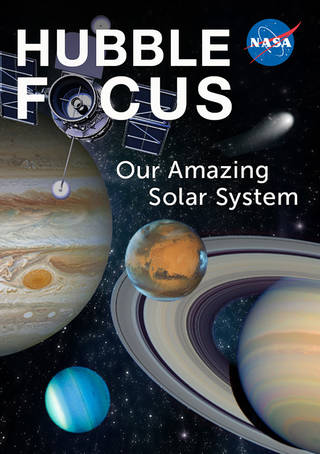 Hubble Focus
Credits: NASA's Goddard Space Flight Center
Download the EPUB 3 file.
NASA’s Hubble Space Telescope team has unveiled a new e-book titled “Hubble Focus: Our Amazing Solar System.” It kicks off a series of e-books that will showcase the telescope’s recent contributions to many different fields of astronomy.
Download:ePub format (108 MB)PDF format (80 MB)  Tip: Use an EPUB reader that supports embedded video to best enjoy this e-book.
Past books have taken readers into Hubble’s history and given a wide overview of the telescope and its mission. The Hubble Focus e-book series will be more topic-specific and emphasize current scientific investigations.
Within the past decade, Hubble has seen asteroid collisions, the disintegration of an icy comet and countless other encounters. Many of these observations were unexpected and help scientists understand how the solar system is changing, said Jennifer Wiseman, senior project scientist for the Hubble Space Telescope.
“Many intriguing observations explored in these e-books were never planned,” she said. “That’s what makes these books especially captivating, because we’re talking about discoveries in recent years that we never dreamed were possible when Hubble launched.”
The first e-book is a stunning collection of high-resolution photos and interactive videos from the space telescope, with chapters covering topics ranging from weather on other planets to potentially habitable moons.
One focal point lies in the story of how Hubble’s role studying planets, moons, asteroids and comets has led and complemented the efforts of spacecraft and landers dispatched throughout the solar system.
In just one example, the Hubble telescope performed initial observations of the Pluto system and discovered four previously unknown moons. This information helped scientists plan the course and observations for NASA’s New Horizons mission to study Pluto and its satellites. Now, the New Horizons spacecraft is on its way past Pluto and deeper into the Kuiper Belt where it will observe a faraway object also recently discovered by Hubble.

Check out NASA's Cassini ebook "The Saturn System: Through the Eyes of Cassini" https://www.nasa.gov/connect/ebooks/the-saturn-system.html

“Hubble has a new and unique perspective studying these planetary bodies because we can see them as a whole,” Wiseman said. “Hubble has been used to study global storms on Mars and on the outer planets. It has even detected evidence for plumes of water vapor being expelled from the cracks in the ice of Jupiter’s moon Europa, which paves the way for future probes to study the nature of Europa's under-ice ocean.”
Wiseman said that the next installments in the Hubble Focus series are already in preparation and will cover all sorts of scientific areas Hubble has explored including galaxies, exoplanets and even the evolution of the universe.
The new e-book is compatible with most electronic devices and can be downloaded in multiple formats for free from:https://www.nasa.gov/content/goddard/hubble-e-books
For more information about Hubble, visit:www.nasa.gov/hubble
By Chelsey BallarteNASA’s Goddard Space Flight Center, Greenbelt, Md.
Editor: Brian Dunbar
Publicado por salud equitativa en 9:14