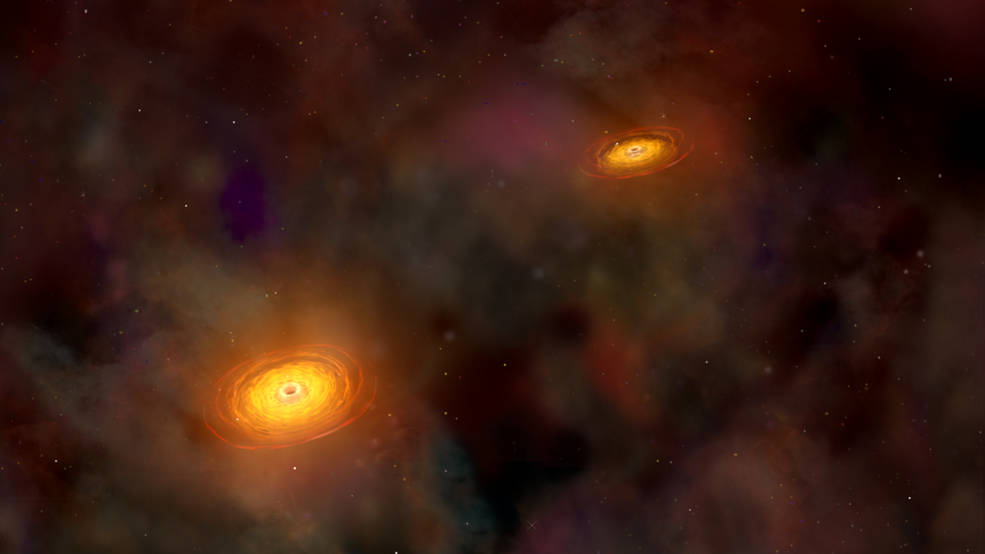 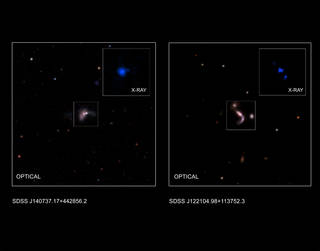 This graphic shows two of five new pairs of supermassive black holes recently identified by astronomers using a combination of data from NASA’s Chandra X-ray Observatory, the Wide-field Infrared Survey Explorer (WISE), and the ground-based Large Binocular Telescope in Arizona.
Credits: X-ray (J122104): NASA/CXC/George Mason Univ./S.Satyapal et al.; X-ray (J140737): NASA/CXC/Univ. of Victoria/S.Ellison et al.; Optical: SDSS; Illustration: NASA/CXC/A.Hobart
Astronomers have identified a bumper crop of dual supermassive black holes in the centers of galaxies. This discovery could help astronomers better understand how giant black holes grow and how they may produce the strongest gravitational wave signals in the Universe.
The new evidence reveals five pairs of supermassive black holes, each containing millions of times the mass of the Sun. These black hole couples formed when two galaxies collided and merged with each other, forcing their supermassive black holes close together.
The black hole pairs were uncovered by combining data from a suite of different observatories including NASA’s Chandra X-ray Observatory, the Wide-field Infrared Survey Explorer (WISE), and the ground-based Large Binocular Telescope in Arizona.
“Astronomers find single supermassive black holes all over the universe,” said Shobita Satyapal, from George Mason University in Fairfax, Virginia, who led one of two papers describing these results. “But even though we’ve predicted they grow rapidly when they are interacting, growing dual supermassive black holes have been difficult to find.”
Before this study fewer than ten confirmed pairs of growing black holes were known from X-ray studies, based mostly on chance detections. To carry out a systematic search, the team had to carefully sift through data from telescopes that detect different wavelengths of light.
Starting with the Galaxy Zoo project, researchers used optical data from the Sloan Digital Sky Survey (SDSS) to identify galaxies where it appeared that a merger between two smaller galaxies was underway. From this set, they selected objects where the separation between the centers of the two galaxies in the SDSS data is less than 30,000 light years, and the infrared colors from WISE data match those predicted for a rapidly growing supermassive black hole.
Seven merging systems containing at least one supermassive black hole were found with this technique. Because strong X-ray emission is a hallmark of growing supermassive black holes, Satyapal and her colleagues then observed these systems with Chandra. Closely-separated pairs of X-ray sources were found in five systems, providing compelling evidence that they contain two growing (or feeding) supermassive black holes.
Both the X-ray data from Chandra and the infrared observations, suggest that the supermassive black holes are buried in large amounts of dust and gas.
“Our work shows that combining the infrared selection with X-ray follow-up is a very effective way to find these black hole pairs,” said Sara Ellison of the University of Victoria in Canada, who led the other paper describing these results. “X-rays and infrared radiation are able to penetrate the obscuring clouds of gas and dust surrounding these black hole pairs, and Chandra’s sharp vision is needed to separate them”.
The paper led by Ellison used additional optical data from the Mapping Nearby Galaxies at Apache Point Observatory (MaNGA) survey to pinpoint one of the new black hole pairs.  One member of this black hole pair is particularly powerful, having the highest X-ray luminosity in a black hole pair observed by Chandra to date.
This work has implications for the burgeoning field of gravitational wave astrophysics. While scientists using the Laser Interferometer Gravitational-Wave Observatory (LIGO) have detected the signals of merging black holes, these black holes have been of the smaller variety weighing between about eight and 36 times the mass of the Sun.
The merging black holes in the centers of galaxies are much larger. When these supermassive black holes draw even closer together, they should start producing gravitational waves. The eventual merger of the dual supermassive black holes in hundreds of millions of years would forge an even bigger black hole. This process would produce an astonishing amount of energy when some of the mass is converted into gravitational waves.
“It is important to understand how common supermassive black hole pairs are, to help in predicting the signals for gravitational wave observatories,” said Satyapal. “With experiments already in place and future ones coming online, this is an exciting time to be researching merging black holes. We are in the early stages of a new era in exploring the universe.”
LIGO is not able to detect gravitational waves from supermassive black hole pairs. Instead, pulsar timing arrays such as the North American Nanohertz Observatory for Gravitational Waves (NANOGrav) are currently performing this search. In the future, the Laser Interferometer Space Antenna (LISA) project could also search for these gravitational waves.
Four of the dual black hole candidates were reported in a paper by Satyapal et al. that was recently accepted for publication in The Astrophysical Journal, and appears online. The other dual black hole candidate was reported in a paper by Ellison et al., which was published in the September 2017 issue of the Monthly Notices of the Royal Astronomical Society and appears online.
NASA's Marshall Space Flight Center in Huntsville, Alabama, manages the Chandra program for NASA's Science Mission Directorate in Washington. The Smithsonian Astrophysical Observatory in Cambridge, Massachusetts, controls Chandra's science and flight operations.
NASA's Jet Propulsion Laboratory in Pasadena, California, managed and operated WISE for NASA's Science Mission Directorate in Washington. The Space Dynamics Laboratory in Logan, Utah, built the science instrument. Ball Aerospace & Technologies Corp. of Boulder, Colorado, built the spacecraft. Science operations and data processing take place at the Caltech/IPAC. Caltech manages JPL for NASA.
Read More from NASA's Chandra X-ray Observatory.
For more Chandra images, multimedia and related materials, visit:
http://www.nasa.gov/chandra
Molly PorterMarshall Space Flight Center, Huntsville, Ala.256-544-0034molly.a.porter@nasa.gov
Editor: Lee Mohon
Publicado por salud equitativa en 10:39