in ‘Star Wars: Rogue One’

NASA Plans to Find Out 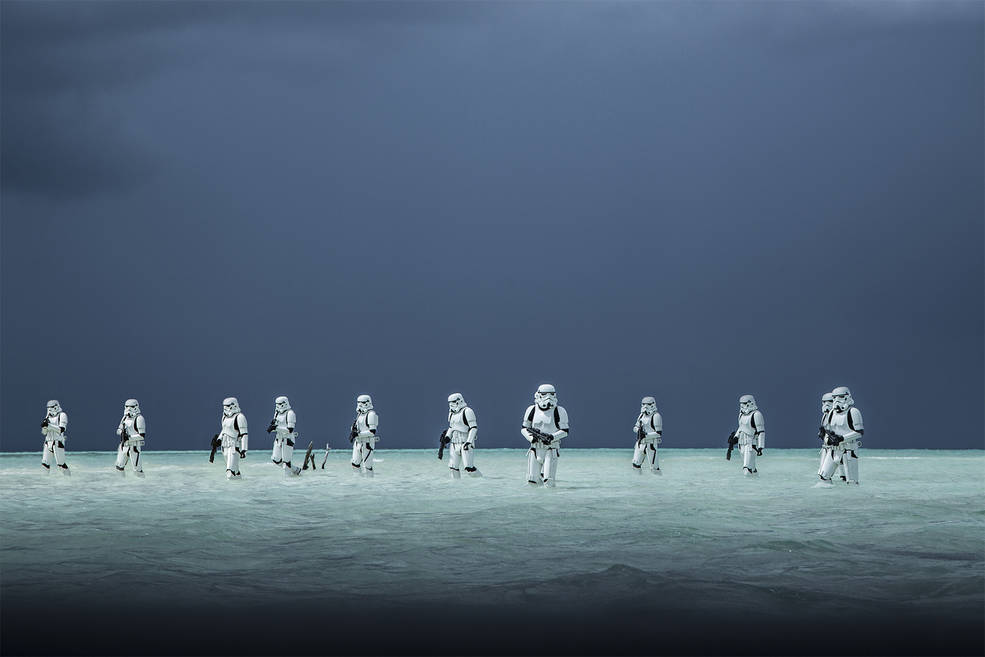 Stormtroopers in the new Star Wars film "Rogue One" wade through the water of an alien ocean world. NASA scientists believe ocean worlds exist in our own galaxy, along with many other environments.
Credits: Disney/Lucasfilm Ltd. & TM.
In the “Star Wars” universe, ice, ocean and desert planets burst from the darkness as your ship drops out of light speed. But these worlds might be more than just science fiction.
Some of the planets discovered around stars in our own galaxy could be very similar to arid Tatooine, watery Scarif and even frozen Hoth, according to NASA scientists.
Sifting through data on the more than 3,400 confirmed alien worlds, scientists apply sophisticated computer modeling techniques to tease out the colors, light, sunrise and sunsets we might encounter if we could pay them a visit.
Some of these distant worlds are even stranger than those that populate the latest “Star Wars” film, “Rogue One.” And others are eerily like the fictional planets from a galaxy far, far away. 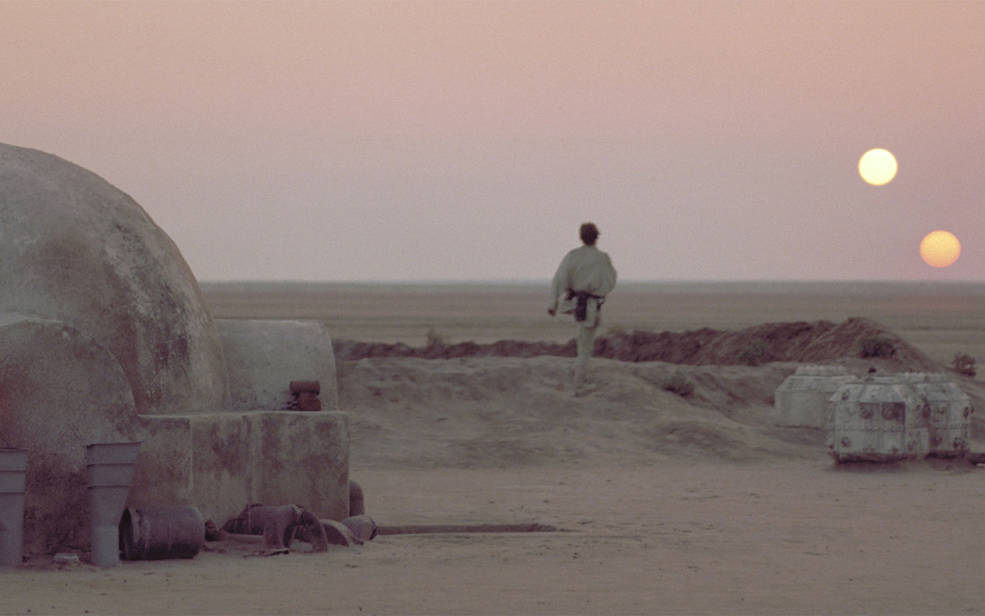 Astronomers have found planets with double sunsets like Tatooine in our galaxy.
Credits: Lucasfilm Ltd. & TM.
Planets with double suns
Tatooine
A real planet in our galaxy reminded scientists so much of Luke Skywalker’s home planet, they named it “Tatooine.” Officially called Kepler-16b, the Saturn-sized planet is about 200 light-years away in the constellation Cygnus.  The reality of its two suns was so startling, George Lucas himself agreed to the astronomers’ nickname for the planet.
“This was the first honest-to-goodness real planetary system where you would see the double sunset as two suns,” said Laurance Doyle, an astrophysicist with the Search for Extraterrestrial Intelligence Institute and Director of the Institute for the Metaphysics of Physics, who discovered the planet using NASA’s Kepler space telescope in 2011. 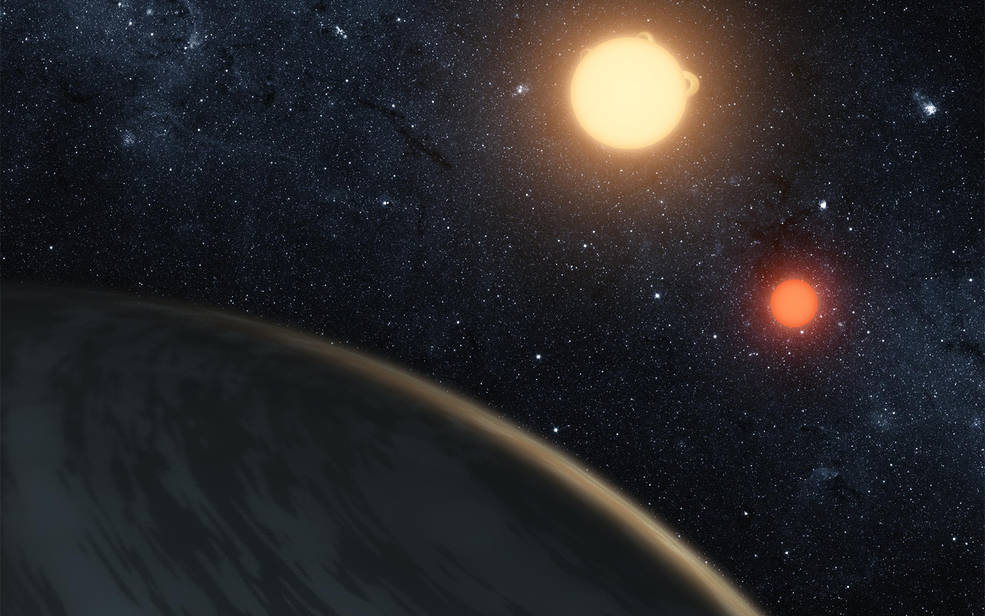 The gas giant Kepler-16b, nicknamed 'Tatooine,' orbits a pair of stars. One star is a small red dwarf star, the other is a larger K dwarf.
Credits: NASA/JPL-Caltech
A person on Kepler-16b would have two shadows. In a storm, two rainbows would appear. Each sunset would be unique, because the stars are always changing their configuration. Building a sundial would require calculus.
Astronomers have discovered that about half of the stars in our Milky Way galaxy are pairs, rather than single stars like our sun. So while Kepler-16b aka Tatooine is probably too cold and gaseous to be home to life, or a hopeful desert farm boy, it’s a good bet that there might be a habitable Tatooine “twin” out there somewhere. 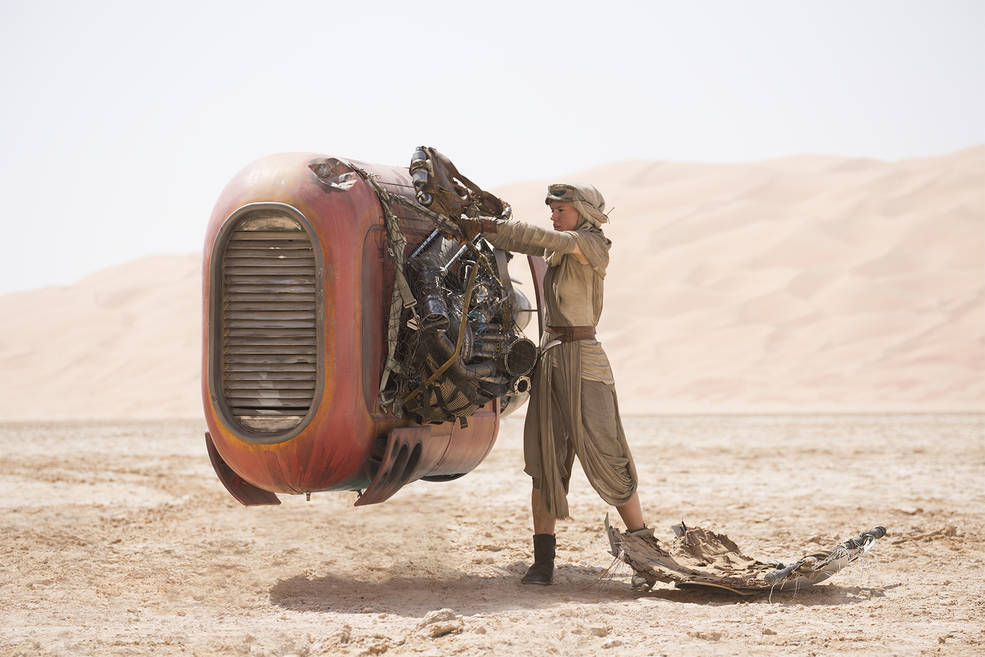 Jakku, a desert planet in "Star Wars: The Force Awakens," is populated with scavengers and creatures. Astronomers think that our galaxy also has many desert worlds that may be habitable.
Credits: David James/Disney/Lucasfilm
Desert worlds
Jakku, Jedha
George Lucas has a fondness for desert planets, and at least one NASA scientist thinks he’s on the right track.
“Desert planets are possible. We have one right here in our solar system in Mars. We think desert planets elsewhere could be even more habitable than Mars is,” said Shawn Domagal-Goldman, an astrobiologist at NASA’s Goddard Space Flight Center in Greenbelt, Maryland.
He likes Lucas’ proliferation of arid worlds because he believes it might reflect the galaxy we live in.
“The recurring theme of desert worlds in 'Star Wars' is really interesting, because there is some research that shows that these would be likely habitable worlds to find,” said Domagal-Goldman, who is, among other things, a climate scientist.
Desert worlds are not only a very real possibility, but they are probably very common, he said. They could be hot, like Tatooine and Jakku, or cold,  like Marsand Jedha in “Rogue One.”
“The lack of water on a desert planet might be what makes it more habitable. Water amplifies changes to climates and can cause planets to end up being really hot like Venus, or really cold like Europa,” said Domagal-Goldman. 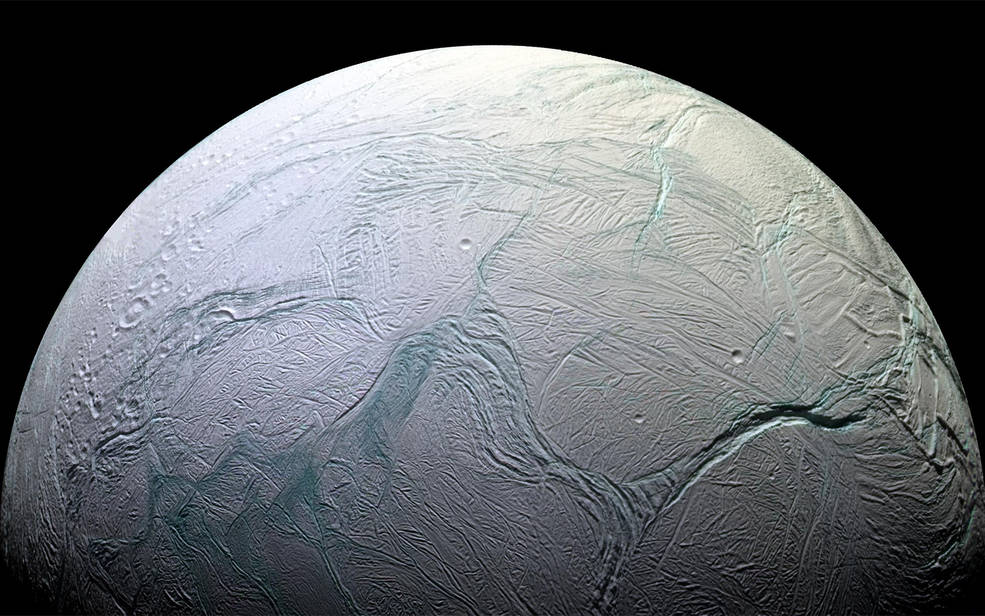 Enceladus is an icy world much like Hoth, except that it may have an ocean under its frozen crust. Astronomers believe this moon of Saturn may be a good candidate for having extraterrestrial life beneath its surface.
Credits: NASA
Ice planets
Hoth
There is a world named Hoth in our galaxy—an icy super-Earth discovered in 2006. It reminded scientists so much of the frozen Rebel base they unofficially nicknamed it after the planet that appears in "The Empire Strikes Back."  The planet's scientific designation is  OGLE 2005-BLG-390L, after the Optical Gravitational Lensing Experiment (OGLE) that found it.
Our galaxy’s Hoth is too cold to support life as we know it. But life may evolve under the ice of a different world, or a moon in our solar system. On Earth, it’s been found inside volcanoes, deep ocean trenches, even the frozen soil of Antarctica.
NASA is currently designing a Europa mission to look for life under the crust of Jupiter’s icy moon Europa. And Saturn’s moon Enceladus also contains an underground ocean that could harbor alien life. 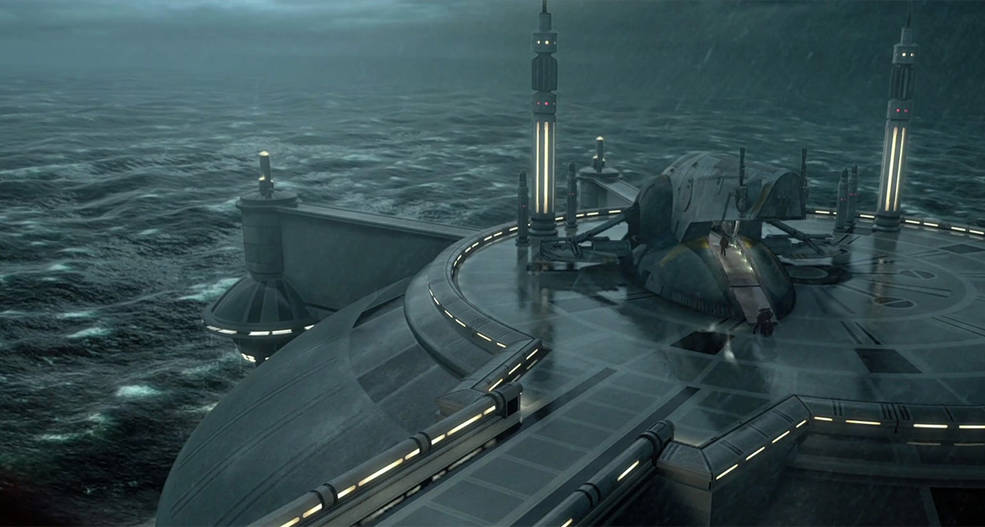 Obi-Wan Kenobi's ship lands on the ocean world of Kamino in "Star Wars: Attack of the Clones." In our galaxy, Kepler-22b could be a super-Earth with a super ocean.
Credits: Disney/Lucasfilm Ltd. & TM.
Ocean worlds
Kamino, Scarif
For the scientists who characterize exoplanets, the most important planet to study is Earth—the only known planet with life. And life on Earth began in the ocean.
“We need Earth climate science to help us understand planetary habitability and the potential diversity of life on exoplanets,” said astrobiologist Nancy Kiang, a research scientist at NASA’s Goddard Institute for Space Studies. As an astrobiologist, her job is to model the kind of plant life that might exist on planets around other stars—also known as exoplanets.
We haven’t confirmed the existence of ocean worlds like the perpetually rainy Kamino in “Attack of the Clones,” or worlds with oceans, like the beachy Scarif from “Rogue One.” But we have found frozen ocean worlds in our solar system, in the moons Europa and Enceladus.
We may even be able to glimpse an ocean on an exoplanet in the not-so-distant future.
“Ocean glint can be detected over large distances,” said Victoria Meadows, a professor at the University of Washington and director of the NASA Astrobiology Institute's  Virtual Planetary Laboratory.
Such a glint was first observed reflecting from the liquid methane seas on Titan, the largest moon of Saturn. 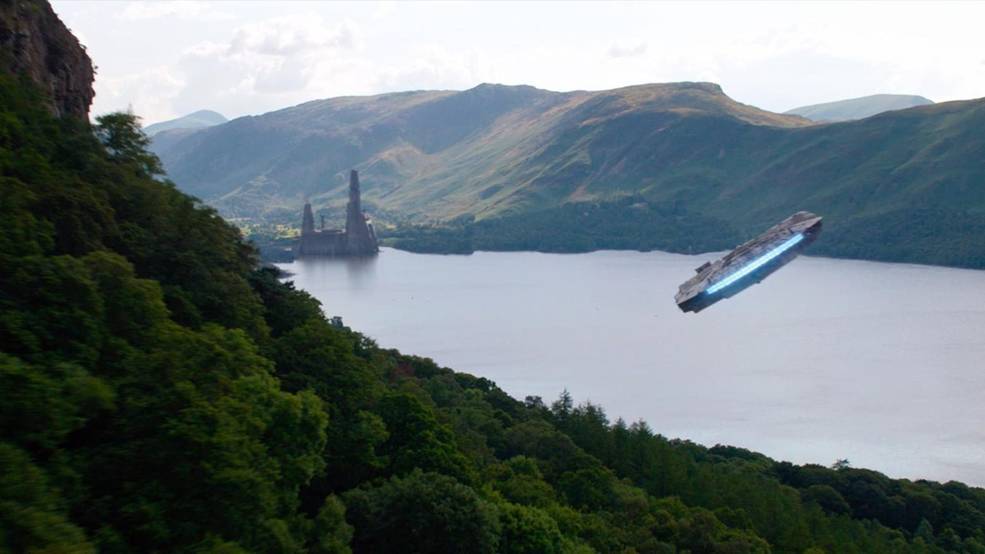 The Millennium Falcon cruises over the lush forest planet Takodana in "The Force Awakens." Unlike the green worlds of 'Star Wars,' scientists believe that plant life in our galaxy could come in many colors.
Credits: Disney/Lucasfilm Ltd.
Forest worlds
Endor, Takodana
Both the forest moon of Endor, from “Return of the Jedi,” and Takodana, the home of Han Solo’s favorite cantina in “The Force Awakens,” are green like our home planet. But astrobiologists think that plant life on other worlds could be red, black, or even rainbow-colored.
A few months ago, astronomers from the European Southern Observatory announced the discovery of Proxima Centauri b, a planet only four light-years away from Earth, which orbits a tiny red star.
“The star color would be peachy to the human eye,” Meadows said. “And the planet would appear dark purple to light purple, looking at it from a spacecraft.” From the surface of Proxima b, the sky would appear to be periwinkle. 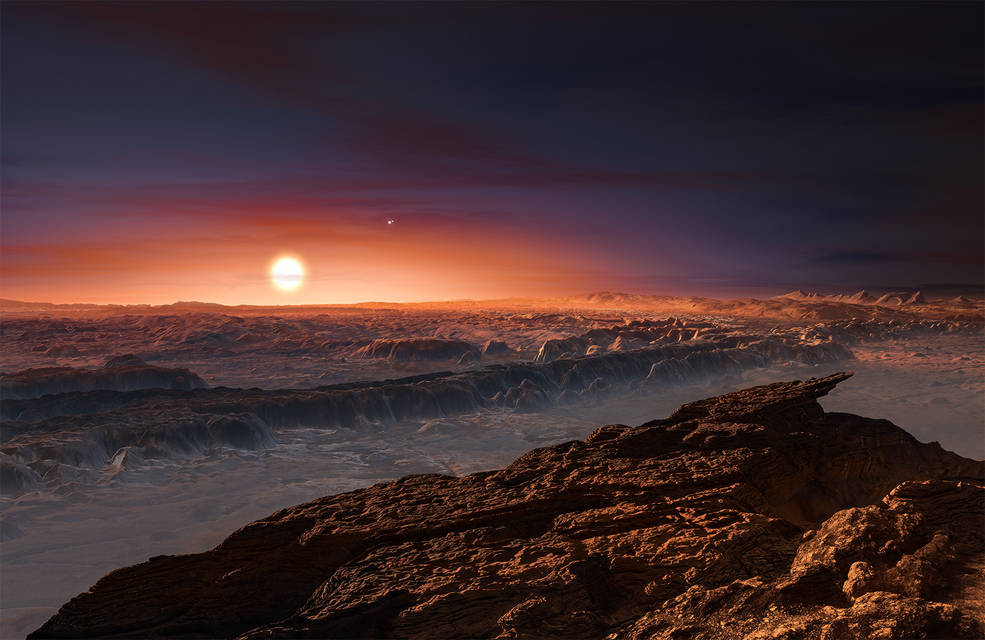 Light and color would look different on a planet orbiting a tiny red star, like this artist's impression of Proxima b. The Earth-sized planet in the habitable zone is the nearest exoplanet to our sun.
Credits: ESO/M. Kornmesser
The light from a red star, also known as an M dwarf, is dim and mostly in the infrared spectrum, as opposed to the visible spectrum we see with our sun. The planet also doesn’t have sunrises or sunsets like Earth: one side always faces its sun.
“If you have photosynthetic organisms, they would always get fixed amounts of light all the time. It would be a permanent sunset around the planet. You would see a gradation of color,” Kiang said.
Just as seaweed changes color from green to dark brown as you dive deeper into the ocean, plants on a red dwarf planet may brilliantly change color from the day side to the night side.
And that could mean rainbow plant life. 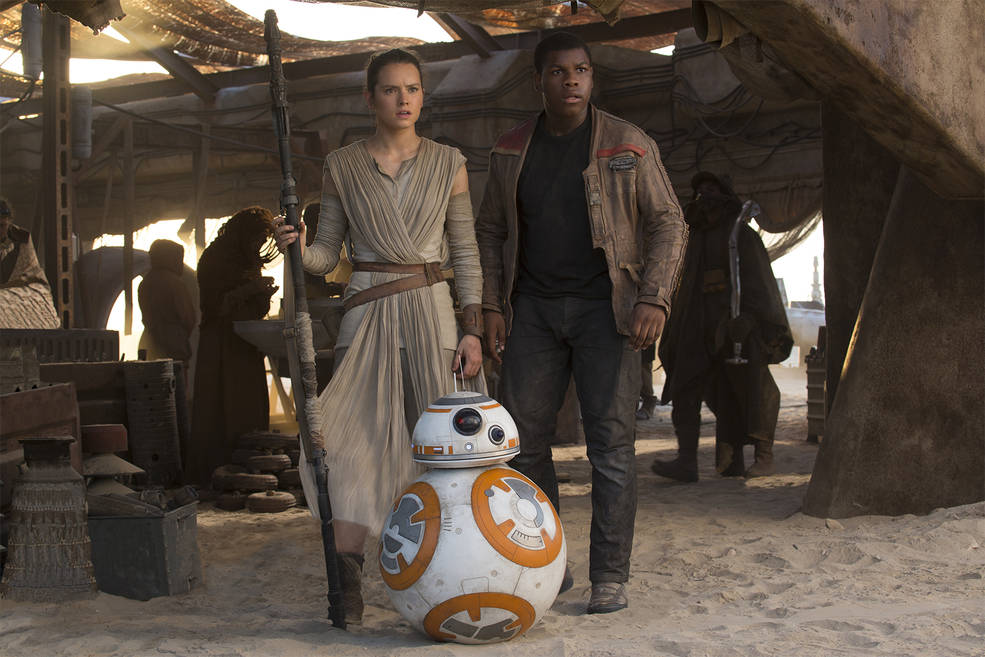 'Star Wars' is driven by beings from many planets trying to get along. NASA scientists are looking for life on a planet other than Earth, and believe the next decade may bring breakthroughs.
Credits: Disney/Lucasfilm Ltd. & TM.
Inhabited worlds
Just about any 'Star Wars' planet
In the "Star Wars" universe, Lucas and company envision scores of worlds bustling with intelligent beings. In our galaxy, we know of only one such world so far—Earth. But NASA exoplanet scientist think we have a fighting chance of finding life beyond our solar system.
The next few years will see the launch of a new generation of spacecraft to search for planets around other stars. The  Transiting Exoplanet Survey Satellite(TESS) and the James Webb Space Telescope will attempt to determine what’s in the atmospheres of other planets. Then, in the next decade, the  Wide Field Infrared Survey Telescope (WFIRST) will bring us images of exoplanets around sun-like stars.
That’s one step closer to finding life.
“The idea of life on other planets resonates with people on a very personal level,” Doug Hudgins, NASA’s program scientist for exoplanet exploration, said of the "Star Wars" films' enduring popularity. “They portray this image of a universe that is teeming with life.”
“We are at our heart explorers," he said. “We want to know what’s out there. Through the imaginings of George Lucas and Gene Roddenberry, we get to feel for a bit of time like we really can go out and explore the stars.”
Elizabeth Landau818-354-6425Jet Propulsion Laboratory, Pasadena, Calif.Elizabeth.r.landau@jpl.nasa.gov
Written by Arielle Samuelson
2016-322
Editor: Tony Greicius
Publicado por salud equitativa en 14:55