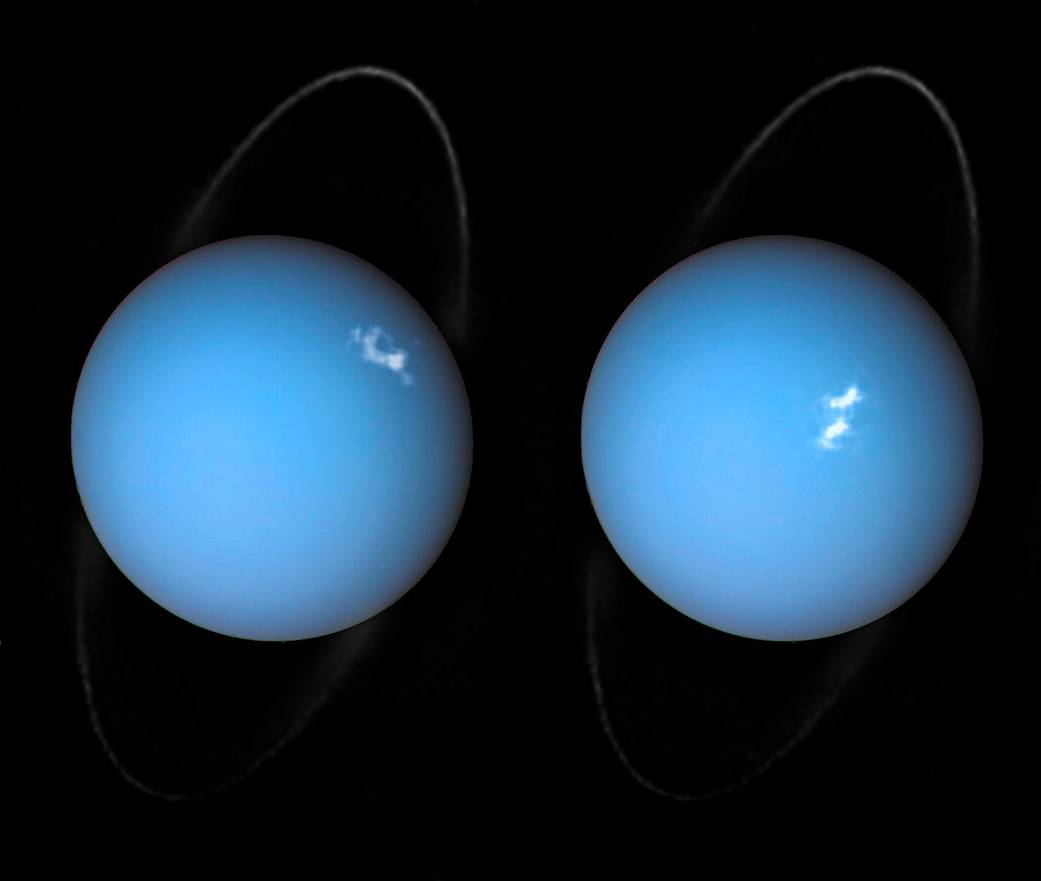 Got a stellar Hubble image on a T-shirt? Or maybe you’ve spotted a Hubble tattoo! Share your photos on Instagram, Twitter, Flickr and Facebook with #SpotHubble and maybe you’ll get a shout-out from @NASAHubble!
Credits: NASA's Goddard Space Flight Center/Jenny Hottle
Learn More about #SpotHubble
This is a composite image of Uranus by Voyager 2 and two different observations made by Hubble — one for the ring and one for the auroras.
Ever since Voyager 2 beamed home spectacular images of the planets in the 1980s, planet-lovers have been hooked on auroras on other planets. Auroras are caused by streams of charged particles like electrons that come from various origins such as solar winds, the planetary ionosphere, and moon volcanism. They become caught in powerful magnetic fields and are channeled into the upper atmosphere, where their interactions with gas particles, such as oxygen or nitrogen, set off spectacular bursts of light.
The auroras on Jupiter and Saturn are well-studied, but not much is known about the auroras of the giant ice planet Uranus. In 2011, the NASA/ESA Hubble Space Telescope became the first Earth-based telescope to snap an image of the auroras on Uranus. In 2012 and 2014 a team led by an astronomer from Paris Observatory took a second look at the auroras using the ultraviolet capabilities of the Space Telescope Imaging Spectrograph (STIS) installed on Hubble.
They tracked the interplanetary shocks caused by two powerful bursts of solar wind traveling from the sun to Uranus, then used Hubble to capture their effect on Uranus’ auroras — and found themselves observing the most intense auroras ever seen on the planet. By watching the auroras over time, they collected the first direct evidence that these powerful shimmering regions rotate with the planet. They also re-discovered Uranus’ long-lost magnetic poles, which were lost shortly after their discovery by Voyager 2 in 1986 due to uncertainties in measurements and the featureless planet surface.
For more information about Hubble, visit: www.nasa.gov/hubble
Credit: ESA/Hubble & NASA, L. Lamy / Observatoire de ParisText credit: European Space Agency
Editor: Karl Hille
Publicado por salud equitativa en 12:07