to Our Star Than Ever Before

As we develop more and more powerful tools to peer beyond our solar system, we learn more about the seemingly endless sea of faraway stars and their curious casts of orbiting planets. But there’s only one star we can travel to directly and observe up close — and that’s our own: the Sun.
Two upcoming missions will soon take us closer to the Sun than we’ve ever been before, providing our best chance yet at uncovering the complexities of solar activity in our own solar system and shedding light on the very nature of space and stars throughout the universe.
Together, NASA’s Parker Solar Probe and ESA’s (the European Space Agency) Solar Orbiter may resolve decades-old questions about the inner workings of our nearest star. Their comprehensive, up-close study of the Sun has important implications for how we live and explore: Energy from the Sun powers life on Earth, but it also triggers space weather events that can pose hazard to technology we increasingly depend upon. Such space weather can disrupt radio communications, affect satellites and human spaceflight, and — at its worst — interfere with power grids. A better understanding of the fundamental processes at the Sun driving these events could improve predictions of when they’ll occur and how their effects may be felt on Earth.
“Our goal is to understand how the Sun works and how it affects the space environment to the point of predictability,” said Chris St. Cyr, Solar Orbiter project scientist at NASA’s Goddard Space Flight Center in Greenbelt, Maryland. “This is really a curiosity-driven science.”
Parker Solar Probe is slated to launch in the summer of 2018, and Solar Orbiter is scheduled to follow in 2020. These missions were developed independently, but their coordinated science objectives are no coincidence: Parker Solar Probe and Solar Orbiter are natural teammates.
Parker Solar Probe will swoop to within 4 million miles of the Sun's surface, facing heat and radiation like no spacecraft before it. Launching in 2018, Parker Solar Probe will provide new data on solar activity and may make critical contributions to our ability to forecast major space-weather events that affect life on Earth.
Credits: NASA/Johns Hopkins APL
Download this video in HD formats from NASA Goddard's Scientific Visualization Studio 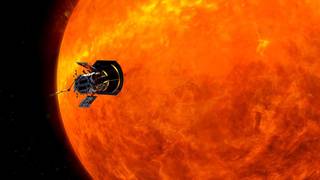 Illustration of the Parker Solar Probe spacecraft approaching the Sun.
Credits: Johns Hopkins University Applied Physics Laboratory
Both missions will take a closer look at the Sun's dynamic outer atmosphere, called the corona.  From Earth, the corona is visible only during total solar eclipses, when the Moon blocks the Sun's most intense light and reveals the outer atmosphere’s wispy, pearly-white structure. But the corona isn’t as delicate as it looks during a total solar eclipse — much of the corona’s behavior is unpredictable and not well understood.
The corona’s charged gases are driven by a set of laws of physics that are rarely involved with our normal experience on Earth. Teasing out the details of what causes the charged particles and magnetic fields to dance and twist as they do can help us understand two outstanding mysteries: what makes the corona so much hotter than the solar surface, and what drives the constant outpouring of solar material, the solar wind, to such high speeds.
We can see that corona from afar, and even measure what the solar wind looks like as it passes by Earth — but that’s like measuring a calm river miles downstream from a waterfall and trying to understand the current’s source. Only recently have we had the technology capable of withstanding the heat and radiation near the Sun, so for the first time, we’re going close to the source.
“Parker Solar Probe and Solar Orbiter employ different sorts of technology, but — as missions — they’ll be complementary,” said Eric Christian, a research scientist on the Parker Solar Probe mission at NASA Goddard. “They’ll be taking pictures of the Sun’s corona at the same time, and they’ll be seeing some of the same structures — what's happening at the poles of the Sun and what those same structures look like at the equator.”
Parker Solar Probe will traverse entirely new territory as it gets closer to the Sun than any spacecraft has come before — as close as 3.8 million miles from the solar surface. If Earth were scaled down to sit at one end of a football field, and the Sun at the other, the mission would make it to the 4-yard line. The current record holder, Helios B, a solar mission of the late 1970s, made it only to the 29-yard line.
From that vantage point, Parker Solar Probe’s four suites of scientific instruments are designed to image the solar wind and study magnetic fields, plasma and energetic particles — clarifying the true anatomy of the Sun’s outer atmosphere. This information will shed light on the so-called coronal heating problem. This refers to the counterintuitive reality that, while temperatures in the corona can spike upwards of a few million degrees Fahrenheit, the underlying solar surface, the photosphere, hovers around just 10,000 degrees. To fully appreciate the oddity of this temperature difference, imagine walking away from a campfire and feeling the air around you get much, much hotter.
Solar Orbiter will come within 26 million miles of the Sun — that would put it within the 27-yard line on that metaphorical football field. It will be in a highly tilted orbit that can provide our first-ever direct images of the Sun’s poles — parts of the Sun that we don’t yet understand well, and which may hold the key to understanding what drives our star’s constant activity and eruptions. 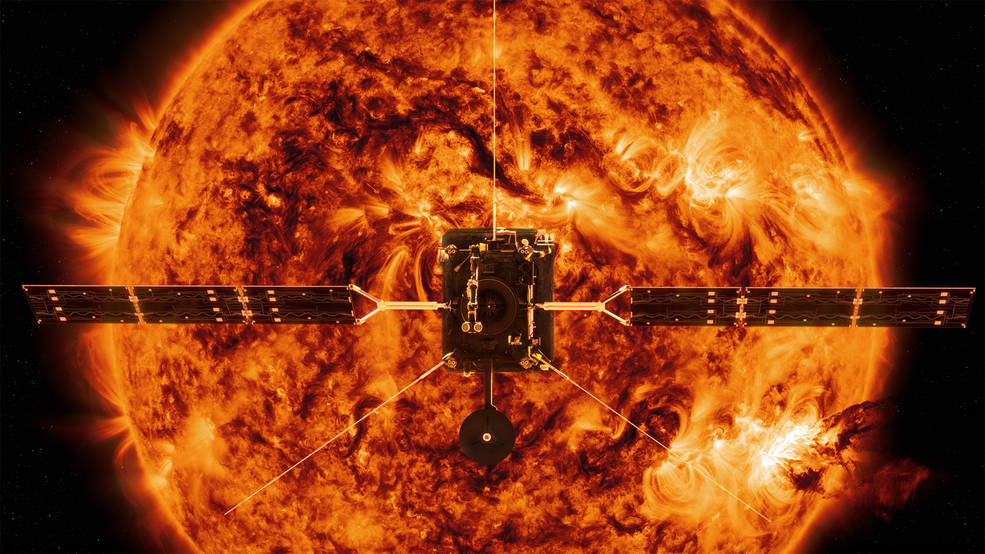 ESA's Solar Orbiter will capture the very first images of the Sun’s polar regions, where magnetic tension builds up and releases in a lively dance. Launching in 2020, Solar Orbiter’s study of the Sun will shed light on its magnetic structure and the many forces that shape solar activity.
Credits: Spacecraft: ESA/ATG medialab; Sun: NASA/SDO/P. Testa (CfA)
Both Parker Solar Probe and Solar Orbiter will study the Sun’s most pervasive influence on the solar system: the solar wind. The Sun constantly exhales a stream of magnetized gas that fills the inner solar system, called solar wind. This solar wind interacts with magnetic fields, atmospheres, or even surfaces of worlds throughout the solar system. On Earth, this interaction can spark auroras and sometimes disrupt communications systems and power grids.
Data from previous missions have led scientists to believe the corona contributes to the processes that accelerate particles, driving the solar wind’s incredible speeds — which triple as it leaves the Sun and passes through the corona. Right now, the solar wind travels some 92 million miles by the time it reaches the spacecraft that measure it — plenty of time for this stream of charged gases to intermix with other particles traveling through space and lose some of its defining features. Parker Solar Probe will catch the solar wind just as it forms and leaves the corona, sending back to Earth some of the most pristine measurements of solar wind ever recorded. Solar Orbiter’s perspective, which will provide a good look at the Sun’s poles, will complement Parker Solar Probe’s study of the solar wind, because it allows scientists to see how the structure and behavior of the solar wind varies at different latitudes.
Solar Orbiter will also make use of its unique orbit to better understand the Sun’s magnetic fields; some of the Sun’s most interesting magnetic activity is concentrated at the poles. But because Earth orbits on a plane more or less in line with the solar equator, we don’t typically get a good view of the poles from afar. It’s a bit like trying to see the summit of Mount Everest from the base of the mountain.
Parker Solar Probe (formerly Solar Probe Plus) will move in a highly elliptical orbit, using seven gravity assists from Venus to move it closer to the Sun with each pass. Solar Orbiter will use Earth and Venus gravity assists to move into a relatively circular orbit and climb up and out of the ecliptic plane to capture the first images of the Sun’s poles.
Credits: NASA’s Goddard Space Flight Center’s Scientific Visualization Studio; Tom Bridgman, lead animator; Scott Wiessinger, producer
Download this video in HD formats from NASA Goddard's Scientific Visualization Studio
That view of the poles will also go a long way toward understanding the overall nature of the Sun’s magnetic field, which is lively and extensive, stretching far beyond the orbit of Neptune. The Sun’s magnetic field is so far-reaching largely because of the solar wind: As the solar wind streams outward, it carries the Sun’s magnetic field with it, creating a vast bubble, called the heliosphere. Within the heliosphere, the solar wind determines the very nature of planetary atmospheres. The heliosphere’s boundaries are shaped by how the Sun interacts with interstellar space. Since Voyager 1’s passage through the heliopause in 2012, we know these boundaries dramatically protect the inner solar system from incoming galactic radiation.
It’s not yet clear how exactly the Sun’s magnetic field is generated or structured deep inside the Sun — though we do know intense magnetic fields around the poles drives variability on the Sun, causing solar flares and coronal mass ejections. Solar Orbiter will hover over roughly the same region of the solar atmosphere for several days at a time while scientists watch tension build up and release around the poles. Those observations may lead to better awareness of the physical processes that ultimately generate the Sun’s magnetic field.
Together, Parker Solar Probe and Solar Orbiter will refine our knowledge of the Sun and heliosphere. Along the way, it’s likely these missions will pose even more questions than they answer — a problem scientists are very much looking forward to.
"There are questions that have been bugging us for a long time," said Adam Szabo, mission scientist for Parker Solar Probe at NASA Goddard. "We are trying to decipher what happens near the Sun, and the obvious solution is to just go there. We cannot wait — not just me, but the whole community."
Related:
By Micheala SosbyNASA's Goddard Space Flight Center, Greenbelt, Md.
Editor: Rob Garner
Publicado por salud equitativa en 10:39