Using a model similar to what meteorologists use to forecast weather and a computer simulation of the physics of evaporating ices, scientists have found evidence of snow and ice features on Pluto that, until now, had only been seen on Earth. 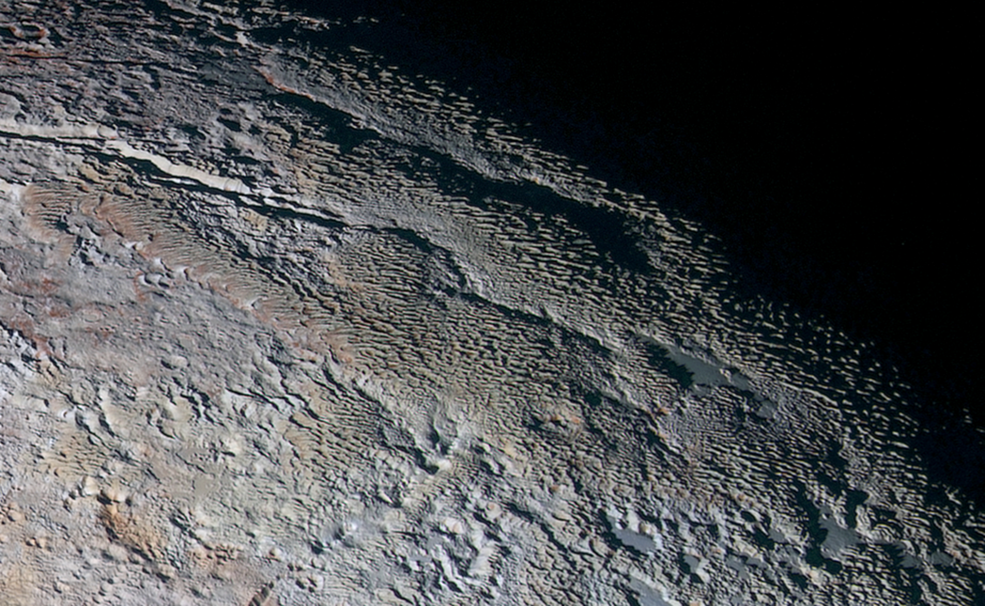 The bladed terrain of Pluto’s informally named Tartarus Dorsa region, imaged by NASA’s New Horizons spacecraft in July 2015.
Credits: NASA/JHUAPL/SwRI
Formed by erosion, the features, known as “penitentes,” are bowl-shaped depressions with blade-like spires around the edge that rise several hundreds of feet.
The research, led by John Moores of York University, Toronto, and done in collaboration with scientists at the Johns Hopkins University Applied Physics Laboratory and NASA Goddard Space Flight Center, indicates that these icy features may also exist on other planets where environmental conditions are similar.
The identification of these ridges in Pluto’s informally named Tartarus Dorsa area suggests that the presence of an atmosphere is necessary for the formation of penitentes – which Moores says would explain why they have not previously been seen on other airless icy satellites or dwarf planets. “But exotic differences in the environment give rise to features with very different scales,” he adds. “This test of our terrestrial models for penitentes suggests that we may find these features elsewhere in the solar system, and in other solar systems, where the conditions are right."
The research team, which also includes York’s Christina Smith, Anthony Toigo of APL and Scott Guzewich of Goddard Space Flight Center, compared its model to ridges on Pluto imaged by NASA’s New Horizons spacecraft in 2015. Pluto’s ridges are much larger – more than 1,600 feet (about 500 meters) tall and separated by two to three miles (about three to five kilometers) – than their Earthly counterparts.
“This gargantuan size is predicted by the same theory that explains the formation of these features on Earth,” says Moores. “In fact, we were able to match the size and separation, the direction of the ridges, as well as their age: three pieces of evidence that support our identification of these ridges as penitentes.”
Moores says though Pluto's environment is very different from Earth’s -- it is much colder, the air much thinner, the sun much dimmer and the snow and ice on the surface are made from methane and nitrogen instead of water -- the same laws of nature apply.  He adds that both NASA and APL were instrumental in the collaboration that led to this new finding; both provided background information on Pluto's atmosphere using a model similar to what meteorologists use to forecast weather on Earth. This was one of the key ingredients in Moores’ own models of the penitentes, without which this discovery would not have been made.
The findings appear this week in the journal Nature.
Editor: Tricia Talbert