Searching for planets around other stars is a tricky business. They’re so small and faint that it’s hard to spot them. But a possible planet in a nearby stellar system may be betraying its presence in a unique way: by a shadow that is sweeping across the face of a vast pancake-shaped gas-and-dust disk surrounding a young star.
The planet itself is not casting the shadow. But it is doing some heavy lifting by gravitationally pulling on material near the star and warping the inner part of the disk. The twisted, misaligned inner disk is casting its shadow across the surface of the outer disk. 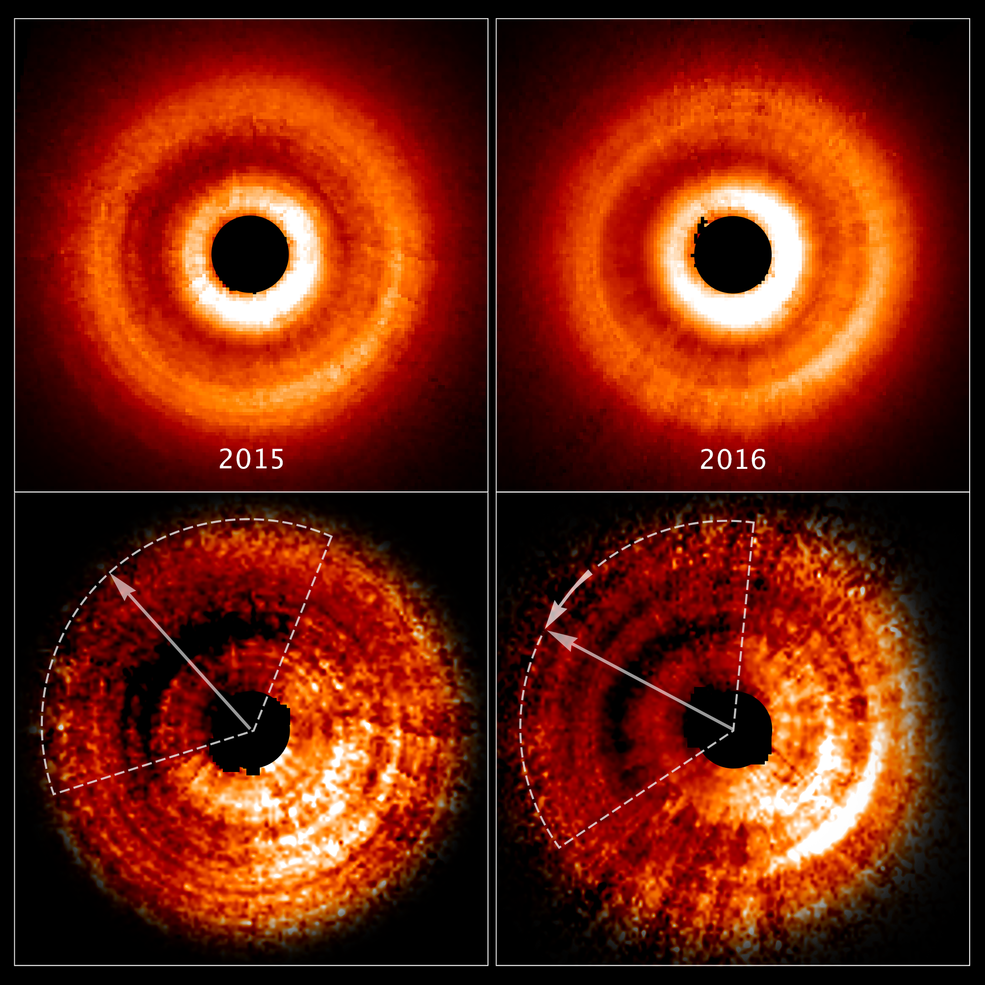 These images, taken a year apart by NASA's Hubble Space Telescope, reveal a shadow moving counterclockwise around a gas-and-dust disk encircling the young star TW Hydrae. The two images at the top, taken by the Space Telescope Imaging Spectrograph, show an uneven brightness across the disk. Through enhanced image processing (images at bottom), the darkening becomes even more apparent. These enhanced images allowed astronomers to determine the reason for the changes in brightness. The dimmer areas of the disk, at top left, are caused by a shadow spreading across the outer disk. The dotted lines approximate the shadow's coverage. The long arrows show how far the shadow has moved in a year (from 2015-2016), which is roughly 20 degrees. Based on Hubble archival data, astronomers determined that the shadow completes a rotation around the central star every 16 years. They know the feature is a shadow because dust and gas in the disk do not orbit the star nearly that quickly. So, the feature must not be part of the physical disk. The shadow may be caused by the gravitational effect of an unseen planet orbiting close to the star. The planet pulls up material from the main disk, creating a warped inner disk. The twisted disk blocks light from the star and casts a shadow onto the disk's outer region.
Credits: NASA, ESA, and J. Debes (STScI)
A team of astronomers led by John Debes of the Space Telescope Science Institute in Baltimore, Maryland say this scenario is the most plausible explanation for the shadow they spotted in the stellar system TW Hydrae, located 192 light-years away in the constellation Hydra, also known as the Female Water Snake. The star is roughly 8 million years old and slightly less massive than our sun. Debes’ team uncovered the phenomenon while analyzing 18 years’ worth of archival observations taken by NASA’s Hubble Space Telescope.
“This is the very first disk where we have so many images over such a long period of time, therefore allowing us to see this interesting effect,” Debes said. “That gives us hope that this shadow phenomenon may be fairly common in young stellar systems.”
Debes will present his team’s results Jan. 7 at the winter meeting of the American Astronomical Society in Grapevine, Texas. 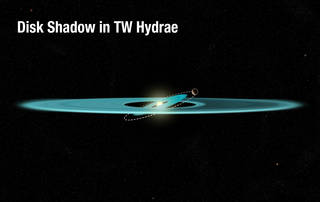 This diagram reveals the proposed structure of a gas-and-dust disk surrounding the nearby, young star TW Hydrae.The illustration shows an inner disk that is tilted due to the gravitational influence of an unseen companion, which is orbiting just outside the disk.The tilted inner disk is the best explanation for a shadow covering part of the disk's outer region. The warped disk is blocking light from the star and casting the shadow across the disk. The nature of the darkening was first revealed in Hubble Space Telescope archival observations, which showed that the feature moved around the star at a much faster rate than any phenomenon that would be physically linked to the slowly rotating disk.TW Hydrae is about 8 million years old and resides 192 light-years from Earth.
Credits: NASA, ESA, and A. Feild (STScI)
Debes’ first clue to the phenomenon was a brightness in the disk that changed with position. Astronomers using Hubble’s Space Telescope Imaging Spectrograph (STIS) first noted this brightness asymmetry in 2005. But they had only one set of observations, and could not make a definitive determination about the nature of the mystery feature.
Searching the archive, Debes’ team put together six images from several different epochs. The observations were made by STIS and by the Hubble's Near Infrared Camera and Multi-Object Spectrometer (NICMOS).
STIS is equipped with a coronagraph that blocks starlight to within about 1 billion miles from the star, allowing Hubble to look as close to the star as Saturn is to our sun. Over time, the structure appeared to move in counter-clockwise fashion around the disk, until, in 2016, it was in the same position as it was in images taken in 2000.
This 16-year period puzzled Debes. He originally thought the feature was part of the disk, but the short period meant that the feature was moving way too fast to be physically in the disk. Under the laws of gravity, disks rotate at glacial speeds. The outermost parts of the TW Hydrae disk would take centuries to complete one rotation.
“The fact that I saw the same motion over 10 billion miles from the star was pretty significant, and told me that I was seeing something that was imprinted on the outer disk rather than something that was happening directly in the disk itself,” Debes said. “The best explanation is that the feature is a shadow moving across the surface of the disk.”
Debes concluded that whatever was making the shadow must be deep inside the 41-billion-mile-wide disk, so close to the star it cannot be imaged by Hubble or any other present-day telescope.
The most likely way to create a shadow is to have an inner disk that is tilted relative to the outer disk. In fact, submillimeter observations of TW Hydrae by the Atacama Large Millimeter Array (ALMA) in Chile suggested a possible warp in the inner disk.
But what causes disks to warp? “The most plausible scenario is the gravitational influence of an unseen planet, which is pulling material out of the plane of the disk and twisting the inner disk,” Debes explained. “The misaligned disk is inside the planet’s orbit.”
Given the relatively short 16-year period of the clocklike moving shadow, the planet is estimated to be about 100 million miles from the star—about as close as Earth is from the sun. The planet would be roughly the size of Jupiter to have enough gravity to pull the material up out of the plane of the main disk. The planet’s gravitational pull causes the disk to wobble, or precess, around the star, giving the shadow its 16-year rotational period.
Recent observations of TW Hydrae by ALMA in Chile add credence to the presence of a planet. ALMA revealed a gap in the disk roughly 93 million miles from TW Hydrae. A gap is significant, because it could be the signature of an unseen planet clearing away a path in the disk.
This new Hubble study, however, offers a unique way to look for planets hiding in the inner part of the disk and probe what is happening very close to the star, which is not reachable in direct imaging by current telescopes. “What is surprising is that we can learn something about an unseen part of the disk by studying the disk’s outer region and by measuring the motion, location, and behavior of a shadow,” Debes said. “This study shows us that even these large disks, whose inner regions are unobservable, are still dynamic, or changing in detectable ways which we didn’t imagine.”
The Hubble Space Telescope is a project of international cooperation between NASA and the European Space Agency. NASA's Goddard Space Flight Center in Greenbelt, Maryland, manages the telescope. The Space Telescope Science Institute (STScI) in Baltimore, Maryland, conducts Hubble science operations. STScI is operated for NASA by the Association of Universities for Research in Astronomy in Washington, D.C.
For images and more information about TW Hydrae and Hubble, visit:
http://hubblesite.org/news/2017/03
www.nasa.gov/hubble