Bedrock Exhumed from the Deep | NASA 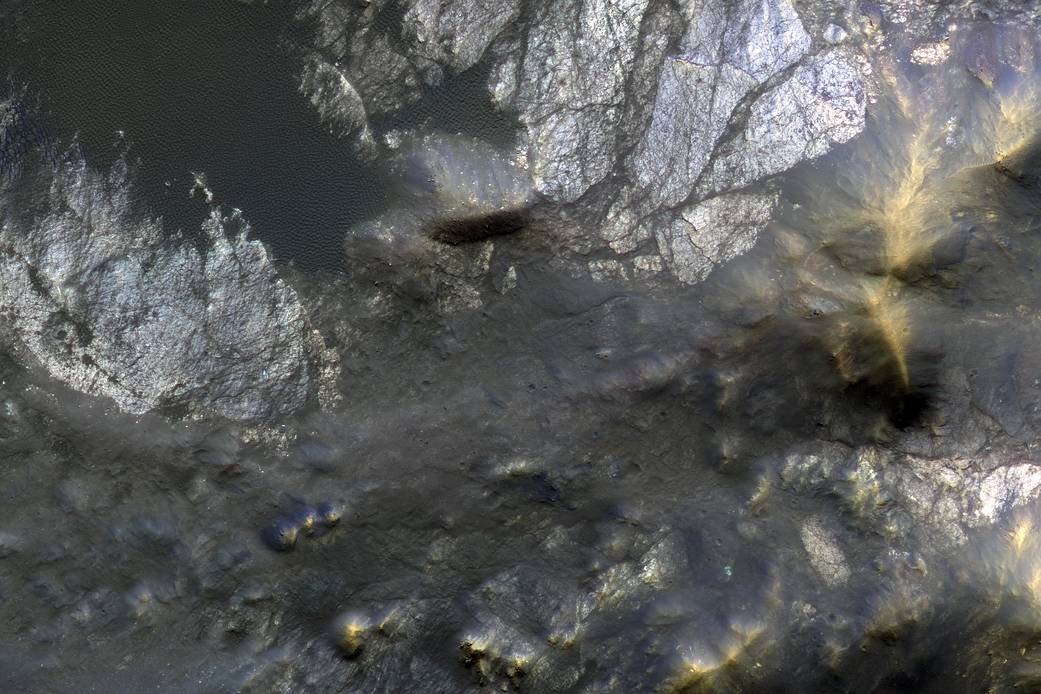 Roadside bedrock outcrops are all too familiar for many who have taken a long road trip through mountainous areas on Earth. Martian craters provide what tectonic mountain building and man's TNT cannot: crater-exposed bedrock outcrops.
Although crater and valley walls offer us roadside-like outcrops from just below the Martian surface, their geometry is not always conducive to orbital views. On the other hand, a crater central peak -- a collection of mountainous rocks that have been brought up from depth, but also rotated and jumbled during the cratering process -- produce some of the most spectacular views of bedrock from orbit.
This color composite cutout shows an example of such bedrock that may originate from as deep as 2 miles beneath the surface. The bedrock at this scale is does not appear to be layered or made up of grains, but has a massive appearance riddled with cross-cutting fractures, some of which have been filled by dark materials and rock fragments (impact melt and breccias) generated by the impact event. A close inspection of the image shows that these light-toned bedrock blocks are partially to fully covered by sand dunes and coated with impact melt bearing breccia flows.
This is a stereo pair with ESP_012367_1695.
The University of Arizona, Tucson, operates HiRISE, which was built by Ball Aerospace & Technologies Corp., Boulder, Colo. NASA's Jet Propulsion Laboratory, a division of Caltech in Pasadena, California, manages the Mars Reconnaissance Orbiter Project for NASA's Science Mission Directorate, Washington.
Editor: Tony Greicius