MercatorNet: Why Tolkien’s fantastic imaginary languages have had more impact than Esperanto

MercatorNet: Why Tolkien’s fantastic imaginary languages have had more impact than Esperanto

Tolkien’s concept is closer to how languages actually work in the real world. 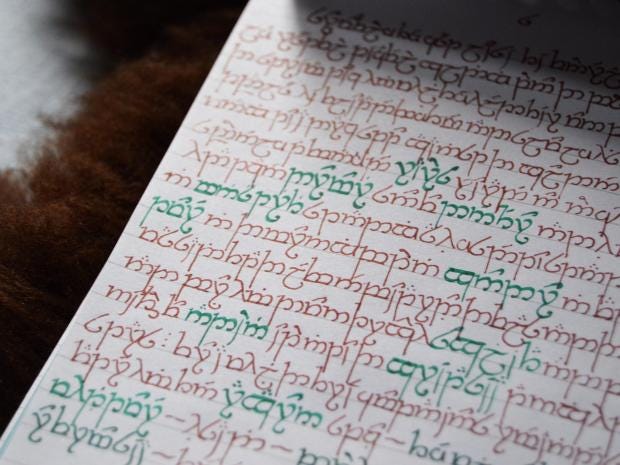 Elvish
JRR Tolkien began writing The Fall of Gondolin while on medical leave from the first world war, 100 years ago this month. It is the first story in what would become his legendarium – the mythology that underpins The Lord of the Rings. But behind the fiction was his interest in another epic act of creation: the construction of imaginary languages.
That same year, on the other side of Europe, Ludwik Zamenhof died in his native Poland. Zamenhof had also been obsessed with language invention, and in 1887 brought out a book introducing his own creation. He published this under the pseudonym Doktoro Esperanto, which in time became the name of the language itself.
The construction of imaginary languages, or conlangs, has a long history, dating back to the 12th century. And Tolkien and Zamenhof are two of its most successful proponents. Yet their aims were very different, and in fact point to opposing views of what language itself actually is. Zamenhof in 1908.
Zamenhof, a Polish Jew growing up in a country where cultural and ethnic animosity was rife, believed that the existence of a universal language was the key to peaceful co-existence. Although language is the “prime motor of civilisation” he wrote, “difference of speech is a cause of antipathy, nay even of hatred, between people”. His plan was to devise something which was simple to learn, not tied to any one nation or culture, and could thus help unite rather than divide humanity.
As “international auxiliary languages” go, Esperanto has been very successful. At its peak, its speakers numbered in the millions, and although exact estimates are very difficult to make, even today up to a million people still use it. It has an expansive body of native literature, there’s a museum in China dedicated exclusively to it, while in Japan Zamenhof himself is even honoured as a god by one particular Shinto sect who use the language. Yet it never really came close to achieving his dreams of world harmony. And at his death, with World War I tearing Europe apart, the optimism he’d had for it had turned mostly to disillusion.
Fantasy languages
JRR Tolkien was himself a supporter of Esperanto, believing it could help unite Europe after World War I. But his personal interest in language invention was very different. His aim wasn’t to enhance the world we live in, but instead to create a completely new one in fiction. He referred to it as his “secret vice”, and explained that for him the purpose was aesthetic rather than pragmatic. It was the creative delight in matching sound, form and meaning in entirely original ways. Tolkien in 1916.
As part of the process of giving substance to the languages he was inventing, he needed to provide a mythology for them. As living, evolving entities, languages take their vitality from the cultures of the people who use them. And it was this that led to the creation of his fictional universe. “The invention of languages is the foundation,” he wrote. “The ‘stories’ were made rather to provide a world for the languages than the reverse.”
And how about conlangs today? A hundred years after the death of Zamenhof, in many ways the art of language construction is as popular as ever. One of the most celebrated current examples is Dothraki, from Game of Thrones.
Created by David J Peterson for Game of Thrones, the televised version of George RR Martin’s novel series A Song of Ice and Fire, the inspiration for this can be traced back to both Zamenhof and Tolkien.
It was while taking a course on Esperanto at university that Peterson first became interested in conlangs, while Martin has spoken of the way that his saga is, in many ways, a response to The Lord of the Rings. And as a tribute he includes various small linguistic references to Tolkien’s world: warg, for example, meaning someone who can project his consciousness into the minds of animals, is a word Tolkien uses for a large species of wolf.
So overall one would have to say that it’s the Tolkienian tradition of fantasy world-building that has prevailed. There are perhaps two reasons for this.
The first is linguistic. Paradoxically, Tolkien’s concept is closer to how languages actually work in the real world. His Elvish languages as they are depicted throughout his work are living, changing things, which evolve to reflect the culture of the communities who speak them. The idea of an international auxiliary language, on the other hand, is to provide a stable, unchanging code, which can be easily learnt by anyone. But human languages are never static; they’re always dynamic. So Esperanto has a fundamental flaw built into its very conception.
And the second reason? Well, maybe these days we’re happier to dedicate ourselves to the creation of fantasy worlds, rather than looking for ways to repair our own.

Philip Seargeant, Senior Lecturer in Applied Linguistics, The Open University
This article was originally published on The Conversation. Read the original article.

Life gets complicated for feminists. Not only do they have to contend with long-standing tensions between black and white, straight and gay; they now have transgender claimants to the title and pro-lifers lining up to join their Women's March on Washington. Of course, if you are going to put "women" in the title of your thing, you have to expect all comers, and let them wear their t-shirt as well.

The organisers of Saturday's anti-Trump march (with Planned Parenthood breathing down their necks) do not want to do that, but even the progressive media can see that they have a problem justifying their exclusion of a feminist pro-life group. Sheila Liaugminas and myself have both written about this today.