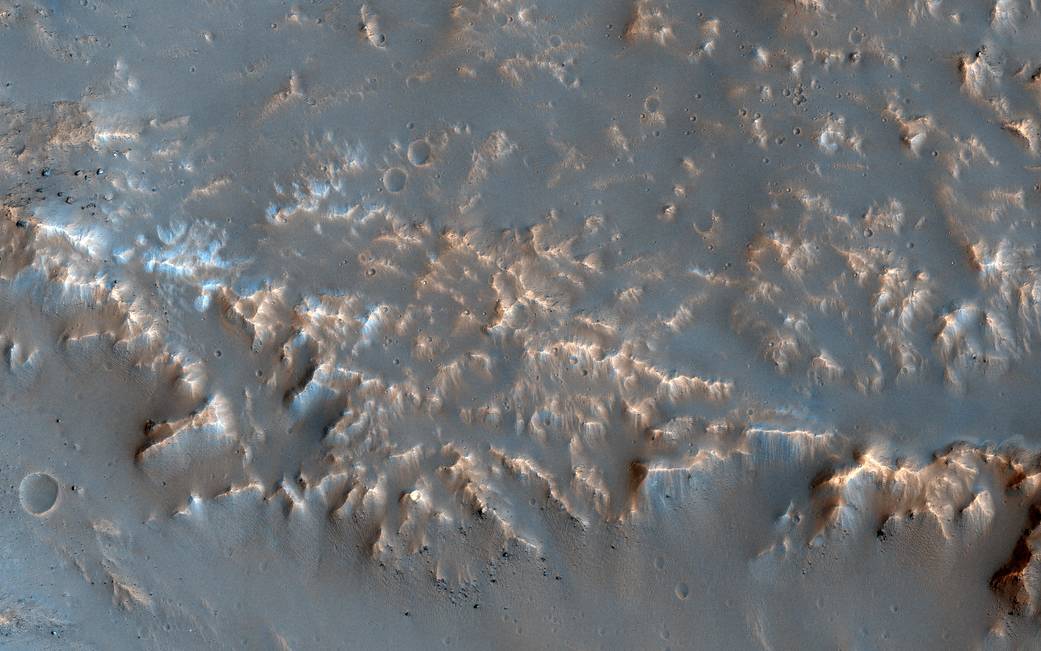 This image of a well-preserved unnamed elliptical crater in Terra Sabaea, is illustrative of the complexity of ejecta deposits forming as a by-product of the impact process that shapes much of the surface of Mars.
Here we see a portion of the western ejecta deposits emanating from a 10-kilometer impact crater that occurs within the wall of a larger, 60-kilometer-wide crater. In the central part is a lobe-shaped portion of the ejecta blanket from the smaller crater. The crater is elliptical not because of an angled (oblique) impact, but because it occurred on the steep slopes of the wall of a larger crater. This caused it to be truncated along the slope and elongated perpendicular to the slope. As a result, any impact melt from the smaller crater would have preferentially deposited down slope and towards the floor of the larger crater (towards the west).
Within this deposit, we can see fine-scale morphological features in the form of a dense network of small ridges and pits. These crater-related pitted materials are consistent with volatile-rich impact melt-bearing deposits seen in some of the best-preserved craters on Mars (e.g., Zumba, Zunil, etc.). These deposits formed immediately after the impact event, and their discernible presence relate to the preservation state of the crater. This image is an attempt to visualize the complex formation and emplacement history of these enigmatic deposits formed by this elliptical crater and to understand its degradation history.
The University of Arizona, Tucson, operates HiRISE, which was built by Ball Aerospace & Technologies Corp., Boulder, Colo. NASA's Jet Propulsion Laboratory, a division of Caltech in Pasadena, California, manages the Mars Reconnaissance Orbiter Project for NASA's Science Mission Directorate, Washington.
Editor: Tony Greicius
Publicado por salud equitativa en 5:17