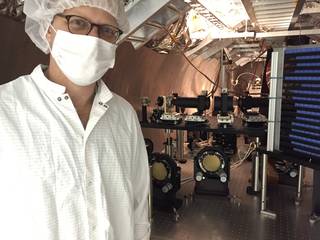 Instrument Scientist Michael McElwain and his team developed an integral field spectrograph called PISCES. The tabletop-sized instrument now is installed at a Jet Propulsion Laboratory facility to test light-suppression technologies for a planned follow-on to the James Webb Space Telescope. Goddard team members include Qian Gong, Tyler Groff, Jorge Llop, Avi Mandell, Maxime Rizzo, Prabal Saxena, and Neil Zimmerman. JPL team members include Eric Cady and Camilo Mejia Prada.
Credits: NASA
NASA researchers say they have passed a major milestone in their quest to mature more powerful tools for directly detecting and analyzing the atmospheres of giant planets outside the solar system — one of the observational goals of NASA’s proposed Wide-Field Infrared Space Telescope, also known as WFIRST.
In tests conducted at the High-Contrast Imaging Testbed at NASA’s Jet Propulsion Laboratory, or JPL, in Pasadena, California — one of the world’s most advanced testbeds of its kind — researchers created what they call a region of very deep contrast between a simulated star and its planet. They also demonstrated the ability to detect and analyze the planet’s faint light over a relatively large portion of the visible to near-infrared wavelength band.
An instrument developed by scientists at NASA’s Goddard Space Flight Center in Greenbelt, Maryland — the Prototype Imaging Spectrograph for Coronagraphic Exoplanet Studies, or PISCES — played an important role in the demonstration, showing that it could separate light of one or more Jupiter-sized exoplanets by their wavelength (color) and record the data at every position around a star.
To appreciate the researchers’ milestone, it’s important to understand the challenge itself.
The light from these planets is exceedingly faint — fainter than their host stars by a factor of 100 million or more, and from our perspective on Earth, these planets appear quite close to their stars. With a conventional imaging camera, the planet’s light is lost in the glare of the star. However, with a coronagraph — a device that suppresses the glare and creates a dark zone around a star — the faint light of an exoplanet can be revealed.
Working in concert with the coronagraph, an integral field spectrograph, or IFS, such as PISCES, would be able to separate the exoplanet’s light by its wavelength and record the data, revealing details about the planet’s physical properties, including the chemical composition and structure of its atmosphere.
During the test, the Goddard-JPL team maintained a very deep contrast over 18 percent of the coronagraph’s wavelength band — a record that bodes well for future missions like WFIRST, which has baselined a coronagraph and an IFS-type instrument on the mission. (To put this in perspective, the human eye can see the full visible spectrum of colors, from blue to red, which corresponds to a 50 percent bandpass. In comparison, a laser pointer has one single color, which is much smaller than one percent.)
“Achieving a contrast this deep over such a broad band has never been done before and was one of our goals. Ideally, we would like to observe the entire spectrum of the planet — in other words, see all its colors at once — but that’s not yet possible with current coronagraphic technologies. Eighteen percent, as demonstrated by PISCES, is the current state of the art,” said Goddard scientist and PISCES Instrument Scientist Michael McElwain. In comparison, JPL’s laboratory coronagraph maintained the same level of dark contrast over 10 percent of the optical-wavelength bands before the commissioning of the table-top PISCES last year.
“We are not done yet and are still trying to get to higher contrasts, but the 100 million-to-one over 18 percent of the optical wavelength band is an important and significant milestone,” said Maxime Rizzo, a postdoctoral student who is working with McElwain and his team to advance PISCES. “With the increased bandpass, we can get many colors at once. This enables us to identify more molecules in the atmospheres and get a big picture.”
PISCES, which McElwain developed with funding from Goddard’s Internal Research and Development program and the prestigious Nancy Grace Roman Technology Fellowship, separates light a little differently than more traditional spectrographs.
As an IFS-type device, PISCES takes a coronagraphic image and samples it with a micro-lens array made up of more than 5,800 tiny glass segments no larger than the width of three human hairs. The micro-lens creates an array of “spots” that is then dispersed by a prism and finally re-imaged onto a detector. In practice, each micro-lens, or lenslet, isolates a small portion of the coronagraphic image, creating micro-spectra for the light that passes through each tiny lenslet. The multiple spectra then are combined into a data cube that scientists analyze.
The IFS provides all the wavelength information simultaneously across the entire field of view. With more traditional imaging observations, scientists must cycle through the different wavelengths, which takes time and requires a mechanism to change the filters — requirements not desirable with an orbiting observatory that only has limited time to spend on a target. The optical system itself changes over time due to thermal and dynamic variations, further underscoring the need for simultaneous spectral observations.
“That’s why WFIRST planners baselined the IFS-type spectrograph in the first place,” Rizzo said. “In this case, PISCES offered information over a full 18 percent of the bandpass, instead of the traditional 10 percent that had been demonstrated at JPL without an IFS. PISCES showed that it could enable more science.”
Even though the team demonstrated the deep contrast over a greater portion of the visible to near-infrared bandpass, and in doing so, raised the technology’s readiness level, work remains, said Avi Mandell, the WFIRST IFS project scientist. “The success has opened up all new starlight-suppression ideas that we want to test.”
For more information about WFIRST, visit: www.nasa.gov/wfirst
For more technology news, go to https://gsfctechnology.gsfc.nasa.gov/newsletter/Current.pdf
By Lori KeeseyNASA’s Goddard Space Flight Center
Editor: Lynn Jenner
Publicado por salud equitativa en 14:21