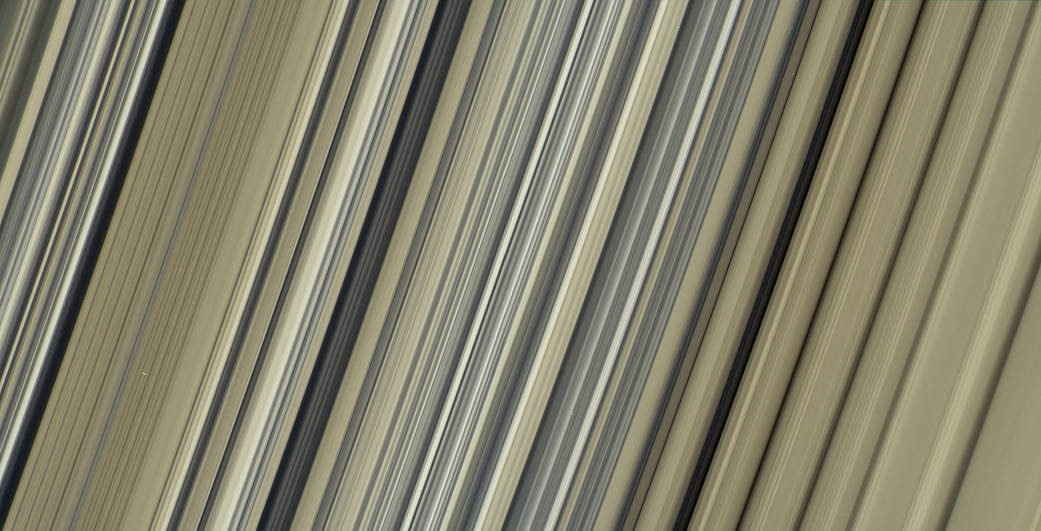 These are the highest-resolution color images of any part of Saturn's rings, to date, showing a portion of the inner-central part of the planet's B Ring. The view is a mosaic of two images that show a region that lies between 61,300 and 65,600 miles (98,600 and 105,500 kilometers) from Saturn's center.
The first image (above) is a natural color composite, created using images taken with red, green and blue spectral filters. The pale tan color is generally not perceptible with the naked eye in telescope views, especially given that Saturn has a similar hue.
The material responsible for bestowing this color on the rings -- which are mostly water ice and would otherwise appear white -- is a matter of intense debate among ring scientists that will hopefully be settled by new in-situ observations before the end of Cassini's mission.
The different ringlets seen here are part of what is called the "irregular structure" of the B ring. Cassini radio occultations of the rings have shown that these features have extremely sharp boundaries on even smaller scales (radially, or along the direction outward from Saturn) than the camera can resolve here. Closer to Saturn, the irregular structures become fuzzier and more rounded, less opaque, and their color contrast diminishes.
The narrow ringlets in the middle of this scene are each about 25 miles (40 kilometers) wide, and the broader bands at right are about 200 to 300 miles (300 to 500 kilometers) across. It remains unclear exactly what causes the variable brightness of these ringlets and bands -- the basic brightness of the ring particles themselves, shadowing on their surfaces, their absolute abundance, and how densely the particles are packed, may all play a role.
The second image (below) is a color-enhanced version. Blue colors represent areas where the spectrum at visible wavelengths is less reddish (meaning the spectrum is flatter toward red wavelengths), while red colors represent areas that are spectrally redder (meaning the spectrum has a steeper spectrum toward red wavelengths). Observations from the Voyager mission and Cassini's visual and infrared mapping spectrometer previously showed these color variations at lower resolution, but it was not known that such well-defined color contrasts would be this sharply defined down to the scale (radial scale) of a couple of miles or kilometers, as seen here. 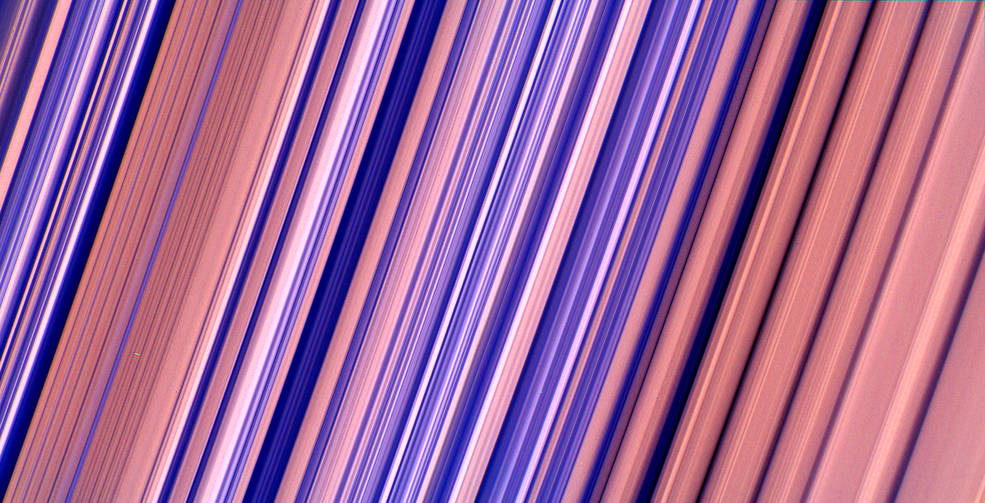 Analysis of additional images from this observation, taken using infrared spectral filters sensitive to absorption of light by water ice, indicates that the areas that appear more visibly reddish in the color-enhanced version are also richer in water ice.
The third image (below) is a composite of the "true" and "enhanced" color images for easy comparison. 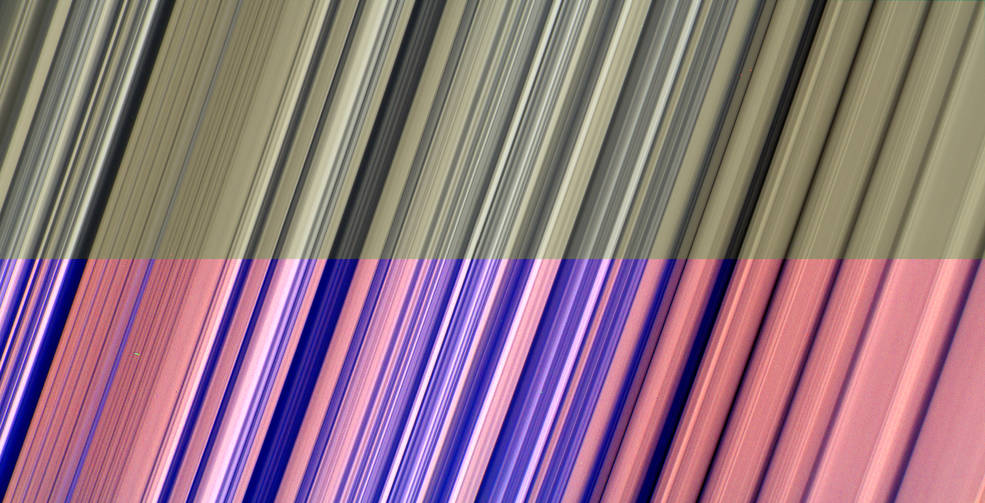 This image was taken on July 6, 2017, with the Cassini spacecraft narrow-angle camera. The image was acquired on the sunlit side of the rings from a distance of 47,000 miles (76,000 kilometers) away from the area pictured. The image scale is about 2 miles (3 kilometers) per pixel. The phase angle, or sun-ring-spacecraft angle, is 90 degrees.
The Cassini mission is a cooperative project of NASA, ESA (the European Space Agency) and the Italian Space Agency. The Jet Propulsion Laboratory, a division of Caltech in Pasadena, manages the mission for NASA's Science Mission Directorate, Washington. The Cassini orbiter and its two onboard cameras were designed, developed and assembled at JPL. The imaging operations center is based at the Space Science Institute in Boulder, Colorado.
For more information about the Cassini-Huygens mission visit https://saturn.jpl.nasa.gov and https://www.nasa.gov/cassini. The Cassini imaging team homepage is at https://ciclops.org.
Image Credit: NASA/JPL-Caltech/Space Science Institute
Editor: Tony Greicius
Publicado por salud equitativa en 7:28