Small satellites provide a cheap, responsive alternative to larger, more expensive satellites. As demand grows, engineers must adapt these “nanosatellites” to provide greater data returns. NASA, in collaboration with educational partners, targets 2021 for the launch of an innovative CubeSat that addresses these challenges.
CubeSats consist of standardized cubed units, or U’s, typically up to 12U. A 1U CubeSat is 10 cubic centimeters and can weigh as little as three pounds. They launch as auxiliary payloads on existing missions, providing a cost-effective opportunity for small-scale research projects. The satellites spend an average 90 days in orbit before falling to Earth and burning up in the atmosphere. Since their inception, CubeSats have been a boon to small satellite research and development.
UF-Radsat, in a highly elliptical orbit, will communicate with the Tracking and Data Relay Satellite (TDRS) constellation and the Near Earth Network.
Credits: NASA's Goddard Space Flight Center
Typically, NASA’s Near Earth Network (NEN) provides direct-to-ground communication for CubeSats. Communication only occurs when a satellite passes over one of the NEN antennas, located around the globe. A team of engineers and scientists from NASA's Goddard Space Flight Center in Greenbelt, Maryland, NASA’s Kennedy Space Center in Florida and the University of Florida are collaborating on a 12U CubeSat that will be the first to interface with NASA’s Space Network, which provides continuous communications services. The University of Florida RadSat (UF-RadSat) is a collaborative design effort of NASA interns from several universities across the country, who have filed multiple invention disclosures for its technologies. The satellite will circle Earth in a geosynchronous transfer orbit, communicating with three Tracking and Data Relay Satellites (TDRS) and NEN ground stations. This methodology provides almost constant data coverage — an innovation that could be useful to many future CubeSat missions. 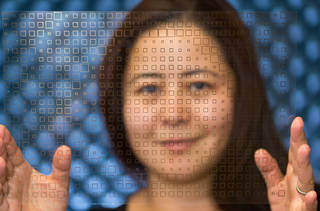 Dr. Reyhan Baktur, a co-investigator from Utah State University, poses with a glass component of UF-Radsat’s solar array.
Credits: Utah State University
“The purpose of our mission is to simultaneously provide critical engineering data to strengthen NASA missions while demonstrating the operational advantages of near-continuous communications between CubeSats and the TDRS constellation,” said Harry Shaw, a NASA co-investigator on the project. “The work we execute for our CubeSat mission will enable this communications option for other CubeSats.”
UF-RadSat is more than just a communications demonstration. NASA will also run two radiation experiments aboard the CubeSat. The first experiment was created by a team at the University of Florida under the direction of Michele Manuel, department chair of Materials Science and Engineering. The team developed a magnesium and gadolinium alloy with radiation mitigating properties. The alloy, stronger and lighter than steel or aluminum, will be tested for its on-orbit effectiveness in trapping thermal neutrons, a radiation health hazard. The experiment will determine the metal’s usefulness in mitigating the risks posed by radiation to future human spaceflight endeavors.
The second experiment aboard UF-RadSat originates at Goddard. Ray Ladbury and Jean-Marie Lauenstein, scientists from Goddard’s Radiation Effects Group, will assess the reliability of power metal-oxide-semiconductor field-effect transistors (MOSFETs) under the harsh radiation conditions of space. Spacecraft power systems use MOSFETs to amplify or switch electronic signals. They can be damaged or destroyed by the radiation environment in space. The experiment will contribute to assessing and improving MOSFETs on-orbit reliability and provide valuable insight into single-event gate rupture, a primary radiation-induced failure in MOSFETs.
“Since its beginnings in the late 1950s, NASA has played a key and influential role in advancing space capabilities,” said Pat Patterson, the Small Satellite Conference committee chair. “The same can be said for NASA’s influence on the rise of small satellites, as NASA is now using these technologies to continue to advance scientific and human exploration, reduce the cost of new space missions, and expand access to space.”