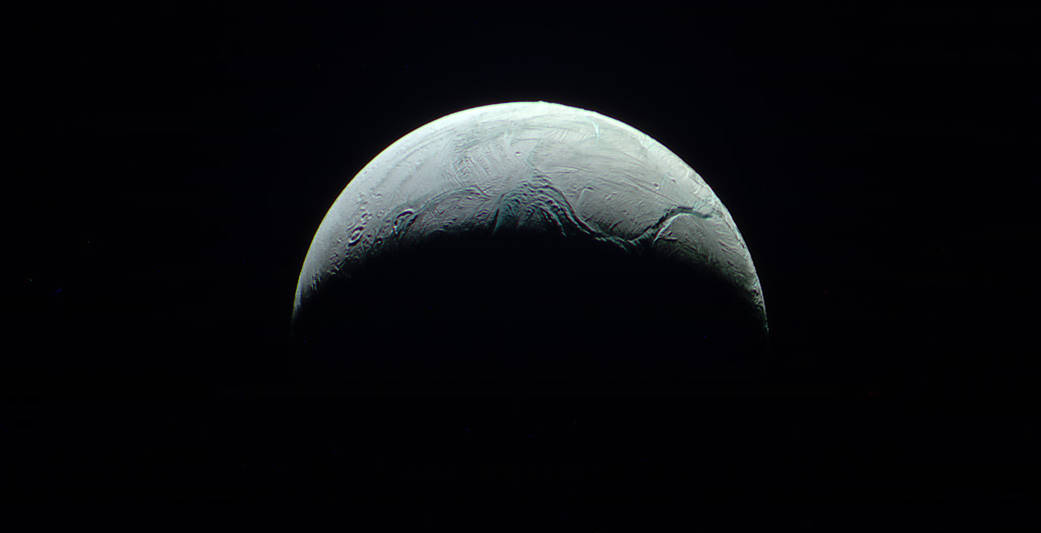 The heavens often seem vast and unchanging as seen from Earth, but movement in the skies is the norm. The relative motions of both Cassini and Enceladus over a 15-minute period create the movement seen in this movie sequence.

Enceladus
Cassini has monitored Enceladus (313 miles or 504 kilometers across) with a particular interest in the plumes and the geology of the south polar region for many years. Different viewing geometries give scientists different information, and the resulting animation gives us a unique “spacecraft’s eye” view of the flyby.
The movie is a composite of six images taken with the Cassini spacecraft narrow-angle camera on Aug. 1, 2017 using filters that allow infrared, green, and ultraviolet light. The image filter centered on 930 nm (IR) was is red in this image, the image filter centered on the green is green, and the image filter centered on 338 nm (UV) is blue.
The view was obtained at a distance of approximately 112,000 miles (181,000 kilometers) from Enceladus. Image scale is about 0.6 mile (1 kilometer) per pixel.
The Cassini mission is a cooperative project of NASA, ESA (the European Space Agency) and the Italian Space Agency. The Jet Propulsion Laboratory, a division of the California Institute of Technology in Pasadena, manages the mission for NASA's Science Mission Directorate, Washington. The Cassini orbiter and its two onboard cameras were designed, developed and assembled at JPL. The imaging operations center is based at the Space Science Institute in Boulder, Colorado.
For more information about the Cassini-Huygens mission visit https://saturn.jpl.nasa.gov and https://www.nasa.gov/cassini . The Cassini imaging team homepage is at http://ciclops.org .
Credit: NASA/JPL-Caltech/Space Science Institute
Editor: Tony Greicius
Publicado por salud equitativa en 10:22