NASA's Hubble Space Telescope has found a blistering hot planet outside our solar system where it "snows" sunscreen. The problem is the sunscreen (titanium oxide) precipitation only happens on the planet's permanent nighttime side. Any possible visitors to the exoplanet, called Kepler-13Ab, would need to bottle up some of that sunscreen, because they won't find it on the sizzling hot, daytime side, which always faces its host star.
Hubble astronomers suggest that powerful winds carry the titanium oxide gas around to the colder nighttime side, where it condenses into crystalline flakes, forms clouds, and precipitates as snow. Kepler-13Ab's strong surface gravity — six times greater than Jupiter's — pulls the titanium oxide snow out of the upper atmosphere and traps it in the lower atmosphere. 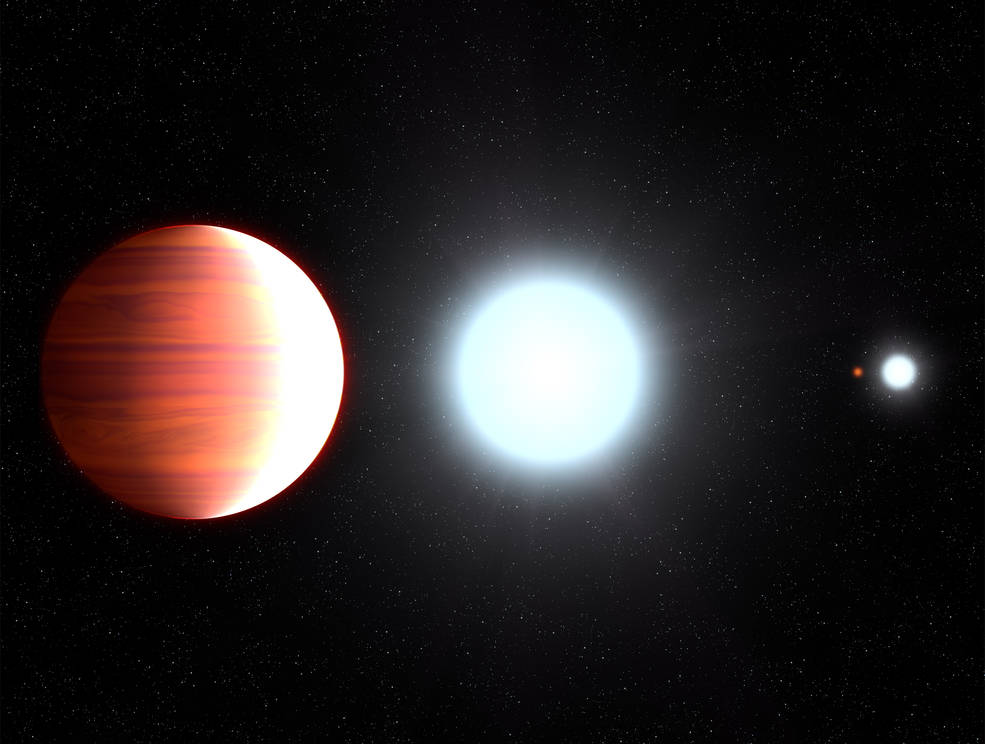 This illustration shows the seething hot planet Kepler-13Ab that circles very close to its host star, Kepler-13A. On the nighttime side the planet's immense gravity pulls down titanium oxide, which precipitates as snow. Seen in the background is the star's binary companion, Kepler-13B, and the third member of the multiple-star system is the orange dwarf star, Kepler-13C.
Credits: NASA, ESA, and G. Bacon (STScI)
Astronomers using Hubble didn't look for titanium oxide specifically. Instead, they observed that the giant planet's atmosphere is cooler at higher altitudes, which is contrary to what was expected. This finding led the researchers to conclude that a light-absorbing gaseous form of titanium oxide, commonly found in this class of star-hugging, gas giant planet known as a "hot Jupiter," has been removed from the dayside's atmosphere.
The Hubble observations represent the first time astronomers have detected this precipitation process, called a "cold trap," on an exoplanet.
Without the titanium oxide gas to absorb incoming starlight on the daytime side, the atmospheric temperature grows colder with increasing altitude. Normally, titanium oxide in the atmospheres of hot Jupiters absorbs light and reradiates it as heat, making the atmosphere grow warmer at higher altitudes. 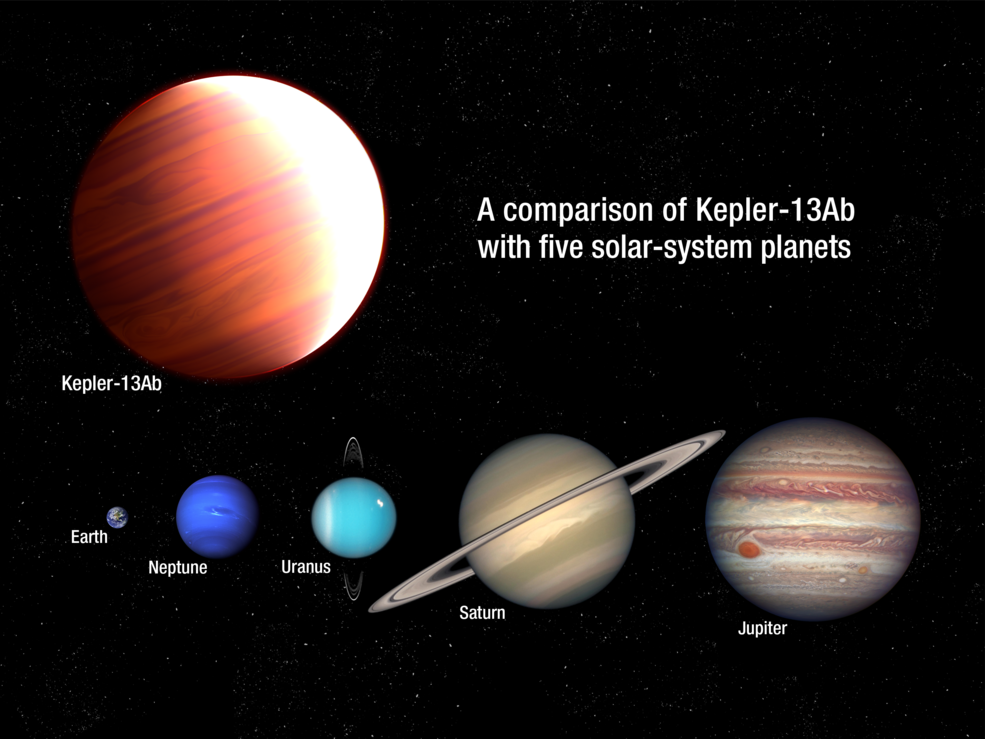 This is an artist’s impression of the gas giant planet Kepler-13Ab as compared in size to several of our solar system planets. The behemoth exoplanet is six times more massive than Jupiter. Kepler-13Ab is also one of the hottest known planets, with a dayside temperature of nearly 5,000 degrees Fahrenheit. It orbits very close to the star Kepler-13A, which lies at a distance of 1,730 light-years from Earth.
Credits: NASA, ESA, and A. Feild (STScI)
These kinds of observations provide insight into the complexity of weather and atmospheric composition on exoplanets, and may someday be applicable to analyzing Earth-size planets for habitability.
"In many ways, the atmospheric studies we're doing on hot Jupiters now are testbeds for how we're going to do atmospheric studies on terrestrial, Earth-like planets," said lead researcher Thomas Beatty of Pennsylvania State University in University Park. "Hot Jupiters provide us with the best views of what climates on other worlds are like. Understanding the atmospheres on these planets and how they work, which is not understood in detail, will help us when we study these smaller planets that are harder to see and have more complicated features in their atmospheres."
Beatty's team selected Kepler-13Ab because it is one of the hottest of the known exoplanets, with a dayside temperature of nearly 5,000 degrees Fahrenheit. Past observations of other hot Jupiters have revealed that the upper atmospheres increase in temperature. Even at their much colder temperatures, most of our solar system's gas giants also exhibit this phenomenon.
Kepler-13Ab is so close to its parent star that it is tidally locked. One side of the planet always faces the star; the other side is in permanent darkness. (Similarly, our moon is tidally locked to Earth; only one hemisphere is permanently visible from Earth.)
The observations confirm a theory from several years ago that this kind of precipitation could occur on massive, hot planets with powerful gravity.
"Presumably, this precipitation process is happening on most of the observed hot Jupiters, but those gas giants all have lower surface gravities than Kepler-13Ab," Beatty explained. "The titanium oxide snow doesn't fall far enough in those atmospheres, and then it gets swept back to the hotter dayside, revaporizes, and returns to a gaseous state."
The researchers used Hubble's Wide Field Camera 3 to conduct spectroscopic observations of the exoplanet's atmosphere in near-infrared light. Hubble made the observations as the distant world traveled behind its star, an event called a secondary eclipse. This type of eclipse yields information on the temperature of the constituents in the atmosphere of the exoplanet's dayside.
"These observations of Kepler-13Ab are telling us how condensates and clouds form in the atmospheres of very hot Jupiters, and how gravity will affect the composition of an atmosphere," Beatty explained. "When looking at these planets, you need to know not only how hot they are but what their gravity is like."
The Kepler-13 system resides 1,730 light-years from Earth.
The team's results appeared in The Astronomical Journal.
Related Links
The science paper by T. Beatty et al.
NASA's Hubble Portal
Donna Weaver / Ray VillardSpace Telescope Science Institute, Baltimore, Maryland410-338-4493 / 410-338-4514dweaver@stsci.edu / villard@stsci.edu
Thomas BeattyPennsylvania State University, University Park814-863-7346tbeatty@psu.edu
Editor: Karl Hille
Publicado por salud equitativa en 10:25