New NASA research is helping to refine our understanding of candidate planets beyond our solar system that might support life.
“Using a model that more realistically simulates atmospheric conditions, we discovered a new process that controls the habitability of exoplanets and will guide us in identifying candidates for further study,” said Yuka Fujii of NASA’s Goddard Institute for Space Studies (GISS), New York, New York and the Earth-Life Science Institute at the Tokyo Institute of Technology, Japan, lead author of a paper on the research published in the Astrophysical Journal Oct. 17. 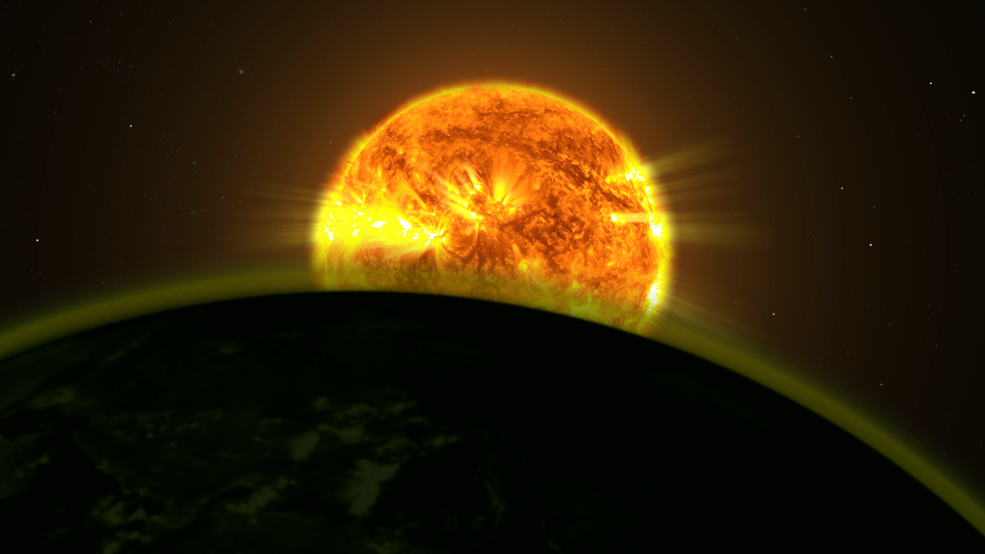 This illustration shows a star's light illuminating the atmosphere of a planet.
Credits: NASA Goddard Space Flight Center
Full caption
Previous models simulated atmospheric conditions along one dimension, the vertical. Like some other recent habitability studies, the new research used a model that calculates conditions in all three dimensions, allowing the team to simulate the circulation of the atmosphere and the special features of that circulation, which one-dimensional models cannot do. The new work will help astronomers allocate scarce observing time to the most promising candidates for habitability.
Liquid water is necessary for life as we know it, so the surface of an alien world (e.g. an exoplanet) is considered potentially habitable if its temperature allows liquid water to be present for sufficient time (billions of years) to allow life to thrive. If the exoplanet is too far from its parent star, it will be too cold, and its oceans will freeze. If the exoplanet is too close, light from the star will be too intense, and its oceans will eventually evaporate and be lost to space. This happens when water vapor rises to a layer in the upper atmosphere called the stratosphere and gets broken into its elemental components (hydrogen and oxygen) by ultraviolet light from the star. The extremely light hydrogen atoms can then escape to space. Planets in the process of losing their oceans this way are said to have entered a “moist greenhouse” state because of their humid stratospheres.
In order for water vapor to rise to the stratosphere, previous models predicted that long-term surface temperatures had to be greater than anything experienced on Earth – over 150 degrees Fahrenheit (66 degrees Celsius). These temperatures would power intense convective storms; however, it turns out that these storms aren’t the reason water reaches the stratosphere for slowly rotating planets entering a moist greenhouse state.
“We found an important role for the type of radiation a star emits and the effect it has on the atmospheric circulation of an exoplanet in making the moist greenhouse state,” said Fujii. For exoplanets orbiting close to their parent stars, a star’s gravity will be strong enough to slow a planet’s rotation. This may cause it to become tidally locked, with one side always facing the star – giving it eternal day – and one side always facing away –giving it eternal night.
When this happens, thick clouds form on the dayside of the planet and act like a sun umbrella to shield the surface from much of the starlight. While this could keep the planet cool and prevent water vapor from rising, the team found that the amount of near-Infrared radiation (NIR) from a star could provide the heat needed to cause a planet to enter the moist greenhouse state. NIR is a type of light invisible to the human eye. Water as vapor in air and water droplets or ice crystals in clouds strongly absorbs NIR light, warming the air. As the air warms, it rises, carrying the water up into the stratosphere where it creates the moist greenhouse.
This process is especially relevant for planets around low-mass stars that are cooler and much dimmer than the Sun. To be habitable, planets must be much closer to these stars than our Earth is to the Sun. At such close range, these planets likely experience strong tides from their star, making them rotate slowly. Also, the cooler a star is, the more NIR it emits. The new model demonstrated that since these stars emit the bulk of their light at NIR wavelengths, a moist greenhouse state will result even in conditions comparable to or somewhat warmer than Earth's tropics. For exoplanets closer to their stars, the team found that the NIR-driven process increased moisture in the stratosphere gradually. So, it’s possible, contrary to old model predictions, that an exoplanet closer to its parent star could remain habitable.
This is an important observation for astronomers searching for habitable worlds, since low-mass stars are the most common in the galaxy. Their sheer numbers increase the odds that a habitable world may be found among them, and their small size increases the chance to detect planetary signals.
The new work will help astronomers screen the most promising candidates in the search for planets that could support life. “As long as we know the temperature of the star, we can estimate whether planets close to their stars have the potential to be in the moist greenhouse state,” said Anthony Del Genio of GISS, a co-author of the paper. “Current technology will be pushed to the limit to detect small amounts of water vapor in an exoplanet’s atmosphere. If there is enough water to be detected, it probably means that planet is in the moist greenhouse state.”
In this study, researchers assumed a planet with an atmosphere like Earth, but entirely covered by oceans. These assumptions allowed the team to clearly see how changing the orbital distance and type of stellar radiation affected the amount of water vapor in the stratosphere. In the future, the team plans to vary planetary characteristics such as gravity, size, atmospheric composition, and surface pressure to see how they affect water vapor circulation and habitability. 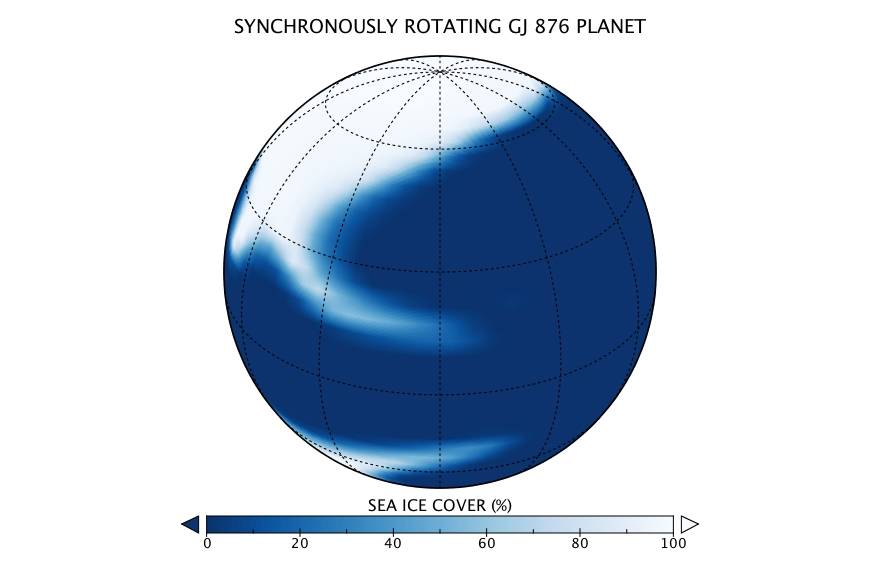 This is a plot of what the sea ice distribution could look like on a synchronously rotating ocean world. The star is off to the right, blue is where there is open ocean, and white is where there is sea ice.
Credits: Anthony Del Genio/GISS/NASA
The research was funded by the NASA Astrobiology Program through the Nexus for Exoplanet System Science; the NASA Postdoctoral Program, administered by Oak Ridge Affiliated Universities, Oak Ridge, Tennessee, and Universities Space Research Association, Columbia, Maryland; and a Grant-in-Aid from the Japan Society for the Promotion of Science, Tokyo, Japan (No.15K17605).
Bill Steigerwald
NASA Goddard Space Flight Center
william.a.steigerwald@nasa.gov
Editor: Bill Steigerwald
Publicado por salud equitativa en 15:17