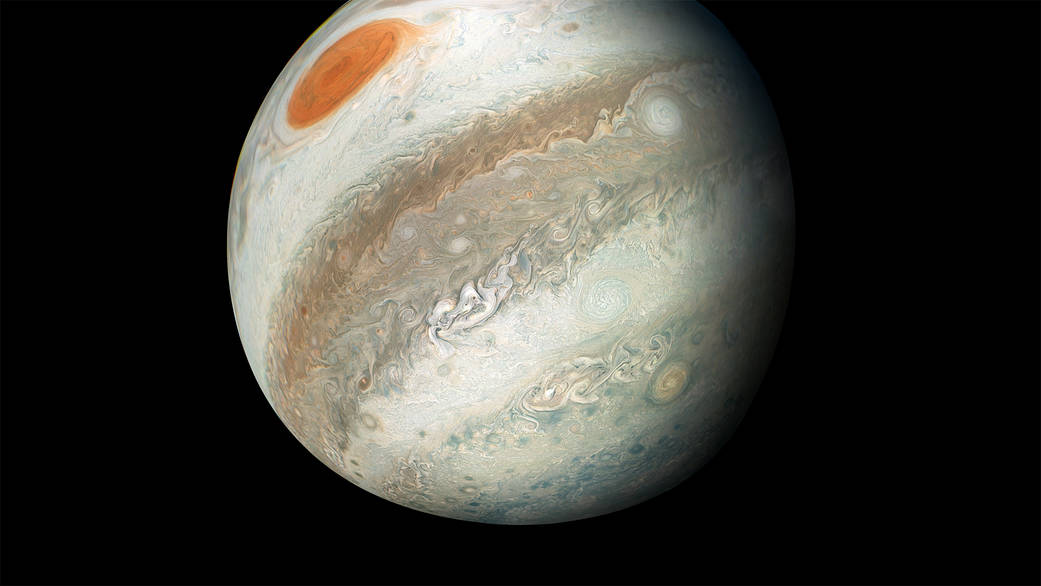 This extraordinary view of Jupiter was captured by NASA’s Juno spacecraft on the outbound leg of its 12th close flyby of the gas giant planet.
This new perspective of Jupiter from the south makes the Great Red Spot appear as though it is in northern territory. This view is unique to Juno and demonstrates how different our view is when we step off the Earth and experience the true nature of our three-dimensional universe.
Juno took the images used to produce this color-enhanced image on April 1 between 3:04 a.m. PDT (6:04 a.m. EDT) and 3:36 a.m. PDT (6:36 a.m. EDT). At the time the images were taken, the spacecraft was between 10,768 miles (17,329 kilometers) to 42,849 miles (68,959 kilometers) from the tops of the clouds of the planet at a southern latitude spanning 34.01 to 71.43 degrees.
Citizen scientists Gerald Eichstädt and Seán Doran created this image using data from the spacecraft’s JunoCam imager. The view is a composite of several separate JunoCam images that were re-projected, blended, and healed.
JunoCam's raw images are available for the public to peruse and process into image products at:
www.missionjuno.swri.edu/junocam
More information about Juno is at:
https://www.nasa.gov/juno and http://missionjuno.swri.edu
Image Credits: NASA/JPL-Caltech/SwRI/MSSS/Gerald Eichstäd/Seán Doran
Image download options
Editor: Tony Greicius
Publicado por salud equitativa en 12:44