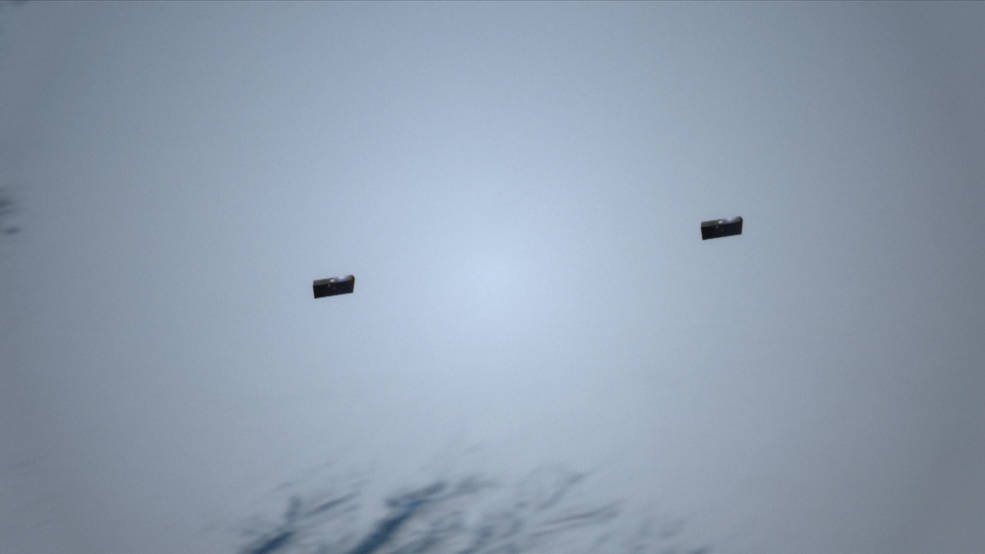 Artist's illustration of the GRACE-FO satellites in orbit.
Credits: NASA
Scheduled to launch no earlier than May 22, the twin satellites of the Gravity Recovery and Climate Experiment Follow-On (GRACE-FO) mission, a collaboration between NASA and the German Research Centre for Geosciences (GFZ), will continue the work of monitoring changes in the world's water cycle and surface mass, which was so well performed by the original GRACE mission. There are far more than five things to say about this amazing new-old mission; but here are a few favorite facts.
1 Percent (or Less)
GRACE-FO tracks liquid and frozen water by measuring month-to-month changes in Earth's gravitational pull very precisely. More than 99 percent of our planet's gravitational pull doesn't change from one month to the next, because it represents the mass of the solid Earth itself. But a tiny fraction of Earth’s mass is constantly on the move, and it is mostly water: Rain is falling, dew is evaporating, ocean currents are flowing, ice is melting and so on. GRACE-FO's maps of regional variations in gravity will show us where that small fraction of overall planetary mass is moving every month.
2 Satellites, One Instrument
Unlike other Earth-observing satellites, which carry instruments that observe some part of the electromagnetic spectrum, the two GRACE-FO satellites themselves are the instrument. The prime instrument measures the tiny changes in the distance between the pair, which arise from the slightly varying gravitational forces of the changing mass below. Researchers produce monthly maps of water and mass change by combining this information with GPS measurements of exactly where the satellites are and accelerometer measurements of other forces acting upon the spacecraft, such as atmospheric drag.
3 Gravity Missions, Including One on the Moon
The same measurement concept used on GRACE and GRACE-FO was also used to map the Moon’s gravity field. NASA’s Gravity Recovery and Interior Laboratory (GRAIL) twins orbited the moon for about a year, allowing insights into science questions such as what Earth's gravitational pull contributed to the Moon's lopsided shape. The intentionally short-lived GRAIL satellites were launched in September 2011 and decommissioned in December 2012.
4 Thousand-Plus Customers Served
GRACE observations have been used in more than 4,300 research papers to date -- a very high number for a single Earth science mission. Most papers have multiple coauthors, meaning the real number of scientist-customers could be higher, but we chose a conservative estimate. As GRACE-FO extends the record of water in motion, there are sure to be more exciting scientific discoveries to come.
5 Things We Didn't Know Before GRACE
Here's a list-within-a-list of five findings from those 4,300-plus papers. Watch the GRACE-FO website to learn what the new mission is adding to this list.
•  Melting ice sheets and dwindling aquifers are contributing to Earth's rotational wobbles.
•  A few years of heavy precipitation can cause so much water to be stored on land that global sea level rise slows or even stops briefly.
•  A third of the world's underground aquifers are being drained faster than they can be replenished.
•  In the Amazon, small fires below the tree canopy may destroy more of the forest than deforestation does -- implying that climatic conditions such as drought may be a greater threat to the rainforest than deforestation is.
•  Australia seesaws up and down by two or three millimeters each year because of changes to Earth’s center of mass that are caused by the movement of water.
Bonus: The Fine Print
JPL manages the GRACE-FO mission for NASA’s Science Mission Directorate in Washington, under the direction of the Earth Systematic Missions Program Office at NASA’s Goddard Space Flight Center in Greenbelt, Maryland. The spacecraft were built by Airbus Defence and Space in Friedrichshafen, Germany, under subcontract to JPL. GFZ contracted GRACE-FO launch services from Iridium. GFZ has subcontracted mission operations to the German Aerospace Center (DLR), which operates the German Space Operations Center in Oberpfaffenhofen, Germany.
Alan BuisJet Propulsion Laboratory, Pasadena, California818-354-0474Alan.Buis@jpl.nasa.gov
Written by Carol RasmussenNASA's Earth Science News Team
2018-106
Editor: Tony Greicius
Publicado por salud equitativa en 12:28