Throughout its seven-year mission, NASA’s Parker Solar Probe will swoop through the Sun’s atmosphere 24 times, getting closer to our star than any spacecraft has gone before. The spacecraft will carry more than scientific instruments on this historic journey — it will also hold more than 1.1 million names submitted by the public to go to the Sun.
“Parker Solar Probe is going to revolutionize our understanding of the Sun, the only star we can study up close,” said Nicola Fox, project scientist for Parker Solar Probe at the Johns Hopkins Applied Physics Lab in Laurel, Maryland. “It’s fitting that as the mission undertakes one of the most extreme journeys of exploration ever tackled by a human-made object, the spacecraft will also carry along the names of so many people who are cheering it on its way.”

“Let’s see what lies ahead.”

Back in March 2018, the public were invited to send their names to the Sun aboard humanity’s first mission to “touch” a star. A total of 1,137,202 names were submitted and confirmed over the seven-and-a-half-week period, and a memory card containing the names was installed on the spacecraft on May 18, 2018, three months before the scheduled launch on July 31, 2018, from NASA’s Kennedy Space Center in Florida. The card was mounted on a plaque bearing a dedication to and a quote from the mission’s namesake, heliophysicist Eugene Parker, who first theorized the existence of the solar wind. This is the first NASA mission to be named for a living individual.
This memory card also carries photos of Parker, professor emeritus at the University of Chicago, and a copy of his groundbreaking 1958 scientific paper. Parker proposed a number of concepts about how stars — including our Sun — give off material. He called this cascade of energy and particles the solar wind, a constant outflow of material from the Sun that we now know shapes everything from the habitability of worlds to our solar system’s interaction with the rest of the galaxy.
Parker Solar Probe will explore the Sun’s outer atmosphere and make critical observations to answer decades-old questions about the physics of stars. The resulting data may also improve forecasts of major eruptions on the Sun and subsequent space weather events that impact life on Earth, as well as satellites and astronauts in space. 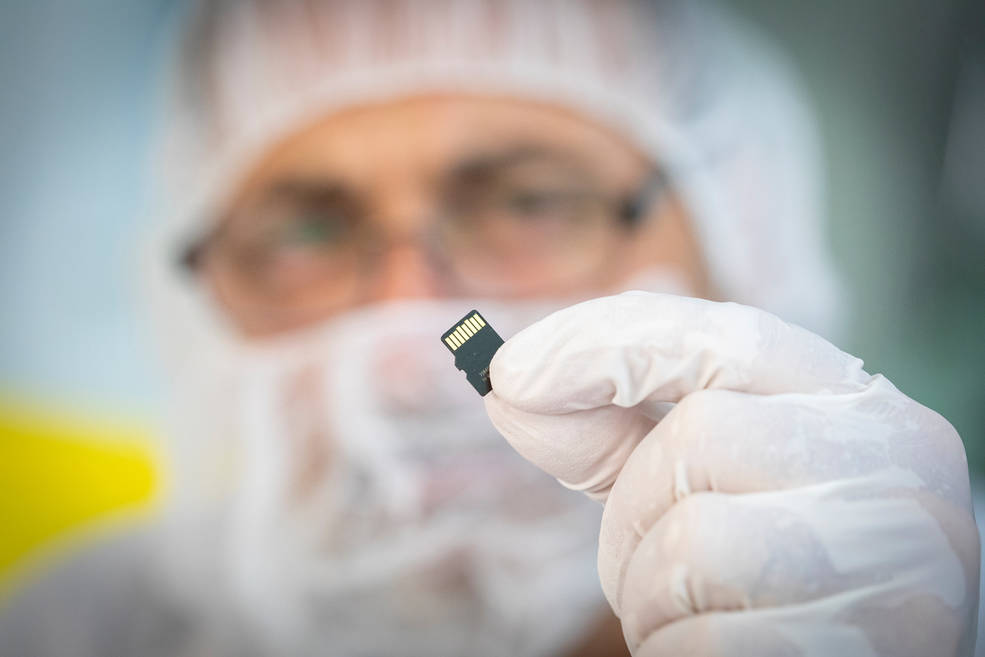 A memory card containing 1,137,202 names submitted by the public to travel to the Sun was installed on Parker Solar Probe on May 18, 2018.
Credits: NASA/Johns Hopkins APL/Ed Whitman
More images available from NASA Goddard's Scientific Visualization Studio
Though our understanding of the Sun and the solar wind has vastly improved since Parker first theorized the solar wind, there are still questions left unanswered. Two of the most fundamental mysteries – which scientists hope Parker Solar Probe will help solve – are the coronal heating problem and the mechanism behind solar wind acceleration. 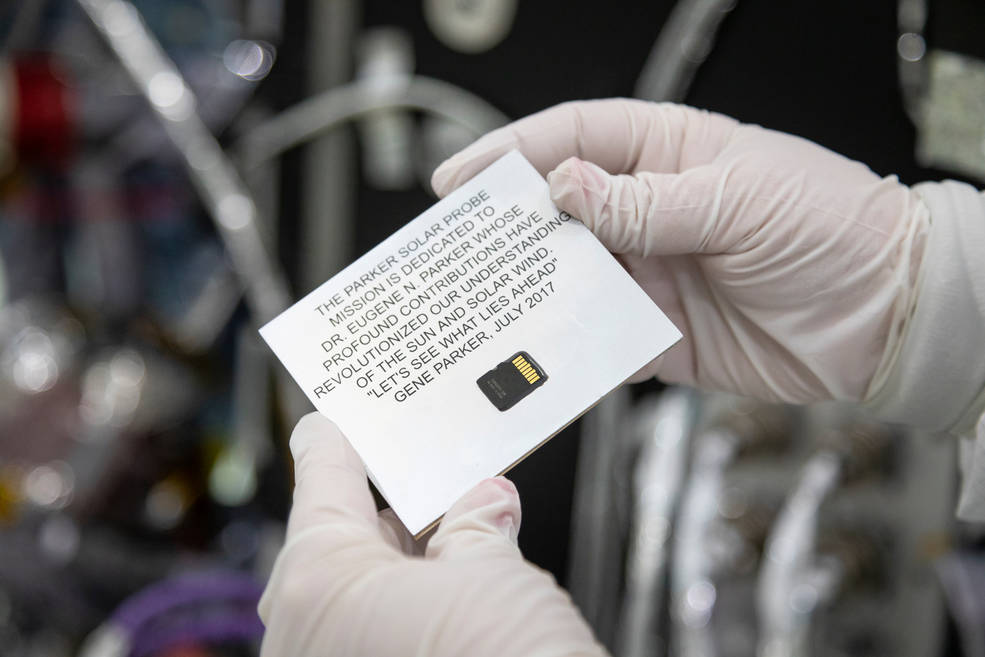 In addition to a chip containing submitted names, the plaque installed on the Parker Solar Probe spacecraft also contains a dedication to and quote from Eugene Parker, the mission’s namesake. It reads: "The Parker Solar Probe mission is dedicated to Dr. Eugene N. Parker whose profound contributions have revolutionized our understanding of the Sun and solar wind. 'Let's see what lies ahead' Gene Parker, July 2017"
Credits: NASA/Johns Hopkins APL/Ed Whitman
More images available from NASA Goddard's Scientific Visualization Studio
The coronal heating problem is what scientists call the apparent mismatch between the temperature of the Sun’s photosphere — the visible “surface,” measuring about 10,000 degrees Fahrenheit — and the much higher temperature of the corona — the Sun’s atmosphere, which reaches temperatures of up to 10 million degrees Fahrenheit. Since the Sun’s energy source is at its core, this increase is similar to walking away from a campfire and suddenly feeling a thousand times hotter — completely counterintuitive. This implies that some other process is continually adding more heat to that solar atmosphere.
Scientists think that the mechanism behind this as-yet unexplained heating happens in the lower corona — and Parker Solar Probe will get closer to this region than any spacecraft has before. Getting a closer look at this region should help scientists identify the source of this coronal heating, along with pinpointing the process that accelerates the solar wind to enormous speeds as it leaves the Sun.
A commemorative reproduction of the plaque bearing an identical memory card — minus the submitted names — was presented to Parker at the Johns Hopkins University Applied Physics Lab in October 2017 by the mission team.
"From the experience of seeing the probe up close, I understand now the difficult task you are undertaking, and I am sure you will succeed,” said Parker after visiting the spacecraft in the clean room. 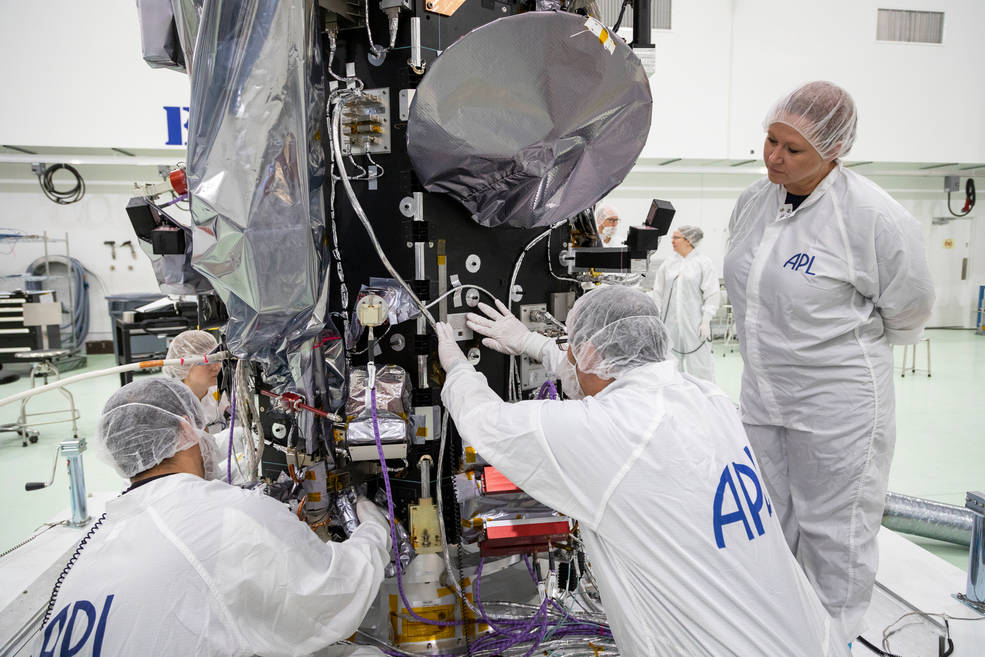