Stellar Thief Is the Surviving Companion to a Supernova | NASA

Stellar Thief Is the Surviving Companion to a Supernova | NASA

Stellar Thief Is the

Seventeen years ago, astronomers witnessed a supernova go off 40 million light-years away in the galaxy called NGC 7424, located in the southern constellation Grus, the Crane. Now, in the fading afterglow of that explosion, NASA's Hubble Space Telescope has captured the first image of a surviving companion to a supernova. This picture is the most compelling evidence that some supernovas originate in double-star systems.
“We know that the majority of massive stars are in binary pairs,” said Stuart Ryder from the Australian Astronomical Observatory (AAO) in Sydney, Australia, and lead author of the study. “Many of these binary pairs will interact and transfer gas from one star to the other when their orbits bring them close together.” 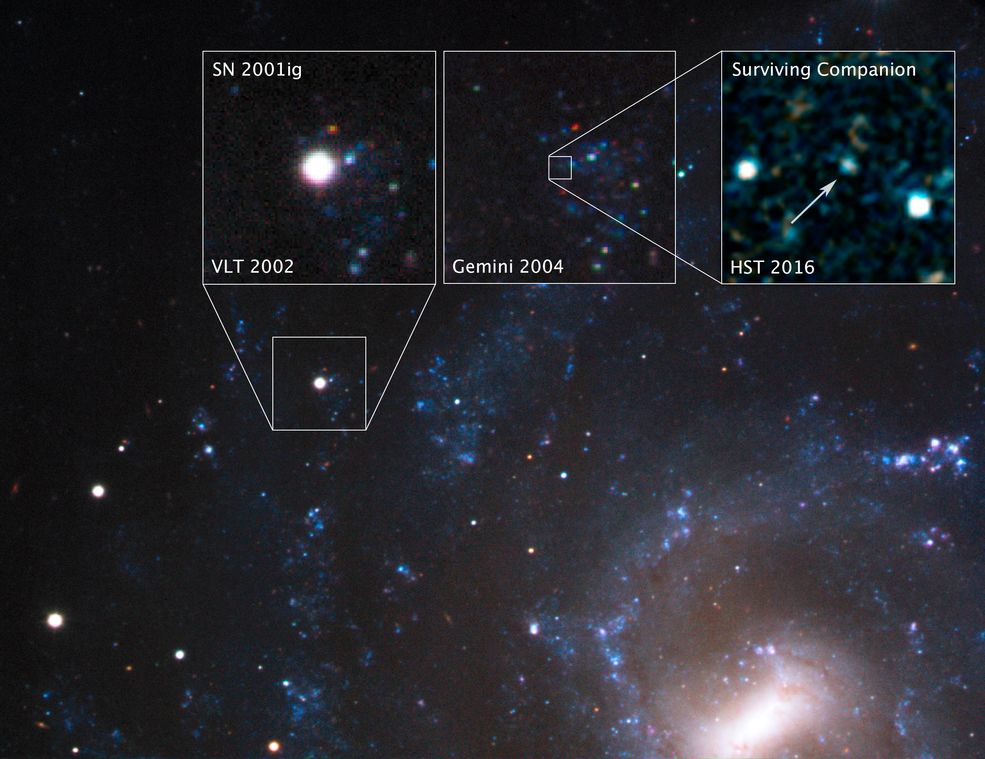 Seventeen years ago, astronomers witnessed supernova 2001ig go off 40 million light-years away in the galaxy NGC 7424, in the southern constellation Grus, the Crane. Shortly after, scientists photographed the supernova with the European Southern Observatory’s Very Large Telescope (VLT) in 2002. Two years later, they followed up with the Gemini South Observatory, which hinted at the presence of a surviving binary companion. As the supernova’s glow faded, scientists focused Hubble on that location in 2016. They pinpointed and photographed the surviving companion, which was possible only due to Hubble’s exquisite resolution and ultraviolet sensitivity. Hubble observations of SN 2001ig provide the best evidence yet that some supernovas originate in double-star systems.
Credits: NASA, ESA, S. Ryder (Australian Astronomical Observatory), and O. Fox (STScI)
The companion to the supernova’s progenitor star was no innocent bystander to the explosion. It siphoned off almost all of the hydrogen from the doomed star’s stellar envelope, the region that transports energy from the star’s core to its atmosphere. Millions of years before the primary star went supernova, the companion’s thievery created an instability in the primary star, causing it to episodically blow off a cocoon and shells of hydrogen gas before the catastrophe.
The supernova, called SN 2001ig, is categorized as a Type IIb stripped-envelope supernova. This type of supernova is unusual because most, but not all, of the hydrogen is gone prior to the explosion. This type of exploding star was first identified in 1987 by team member Alex Filippenko of the University of California, Berkeley.
How stripped-envelope supernovas lose that outer envelope is not entirely clear. They were originally thought to come from single stars with very fast winds that pushed off the outer envelopes. The problem was that when astronomers started looking for the primary stars from which supernovas were spawned, they couldn’t find them for many stripped-envelope supernovas.
“That was especially bizarre, because astronomers expected that they would be the most massive and the brightest progenitor stars,” explained team member Ori Fox of the Space Telescope Science Institute in Baltimore. “Also, the sheer number of stripped-envelope supernovas is greater than predicted.” That fact led scientists to theorize that many of the primary stars were in lower-mass binary systems, and they set out to prove it.
Looking for a binary companion after a supernova explosion is no easy task. First, it has to be at a relatively close distance to Earth for Hubble to see such a faint star. SN 2001ig and its companion are about at that limit. Within that distance range, not many supernovas go off. Even more importantly, astronomers have to know the exact position through very precise measurements.
In 2002, shortly after SN 2001ig exploded, scientists pinpointed the precise location of the supernova with the European Southern Observatory’s Very Large Telescope (VLT) in Cerro Paranal, Chile. In 2004, they then followed up with the Gemini South Observatory in Cerro Pachón, Chile. This observation first hinted at the presence of a surviving binary companion.
Knowing the exact coordinates, Ryder and his team were able to focus Hubble on that location 12 years later, as the supernova’s glow faded. With Hubble’s exquisite resolution and ultraviolet capability, they were able to find and photograph the surviving companion—something only Hubble could do.
Prior to the supernova explosion, the orbit of the two stars around each other took about a year.
When the primary star exploded, it had far less impact on the surviving companion than might be thought. Imagine an avocado pit—representing the dense core of the companion star—embedded in a gelatin dessert—representing the star’s gaseous envelope. As a shock wave passes through, the gelatin might temporarily stretch and wobble, but the avocado pit would remain intact.
In 2014, Fox and his team used Hubble to detect the companion of another Type IIb supernova, SN 1993J. However, they captured a spectrum, not an image. The case of SN 2001ig is the first time a surviving companion has been photographed. “We were finally able to catch the stellar thief, confirming our suspicions that one had to be there,” said Filippenko.
Perhaps as many as half of all stripped-envelope supernovas have companions—the other half lose their outer envelopes via stellar winds. Ryder and his team have the ultimate goal of precisely determining how many supernovas with stripped envelopes have companions.
Their next endeavor is to look at completely stripped-envelope supernovas, as opposed to SN 2001ig and SN 1993J, which were only about 90 percent stripped. These completely stripped-envelope supernovas don’t have much shock interaction with gas in the surrounding stellar environment, since their outer envelopes were lost long before the explosion. Without shock interaction, they fade much faster. This means that the team will only have to wait two or three years to look for surviving companions.
In the future, they also hope to use the James Webb Space Telescope to continue their search.
The paper on this team’s current work was published on March 28, 2018, in the Astrophysical Journal.
The Hubble Space Telescope is a project of international cooperation between NASA and ESA (European Space Agency). NASA's Goddard Space Flight Center in Greenbelt, Maryland, manages the telescope. The Space Telescope Science Institute (STScI) in Baltimore, Maryland, conducts Hubble science operations. STScI is operated for NASA by the Association of Universities for Research in Astronomy in Washington, D.C.
For NASA's Hubble webpage, visit: www.nasa.gov/hubble
For more images and information, visit: http://hubblesite.org/news_release/news/2018-20
For the science paper, visit: http://imgsrc.hubblesite.org/hvi/uploads/science_paper/file_attachment/321/Ryder_published_ApJ_paper.pdf
Ann Jenkins / Ray Villard Space Telescope Science Institute, Baltimore, Maryland 410-338-4488 / 410-338-4514 jenkins@stsci.edu / villard@stsci.edu
Ori Fox Space Telescope Science Institute, Baltimore, Maryland 410-338-6768 ofox@stsci.edu
Stuart Ryder Australian Astronomical Observatory, Sydney, Australia 011-61-2-93724843 011-61-419-970834 (cell) sdr@aao.gov.au
Alex Filippenko University of California, Berkeley, California afilippenko@berkeley.edu
Editor: Karl Hille
Publicado por salud equitativa en 13:47