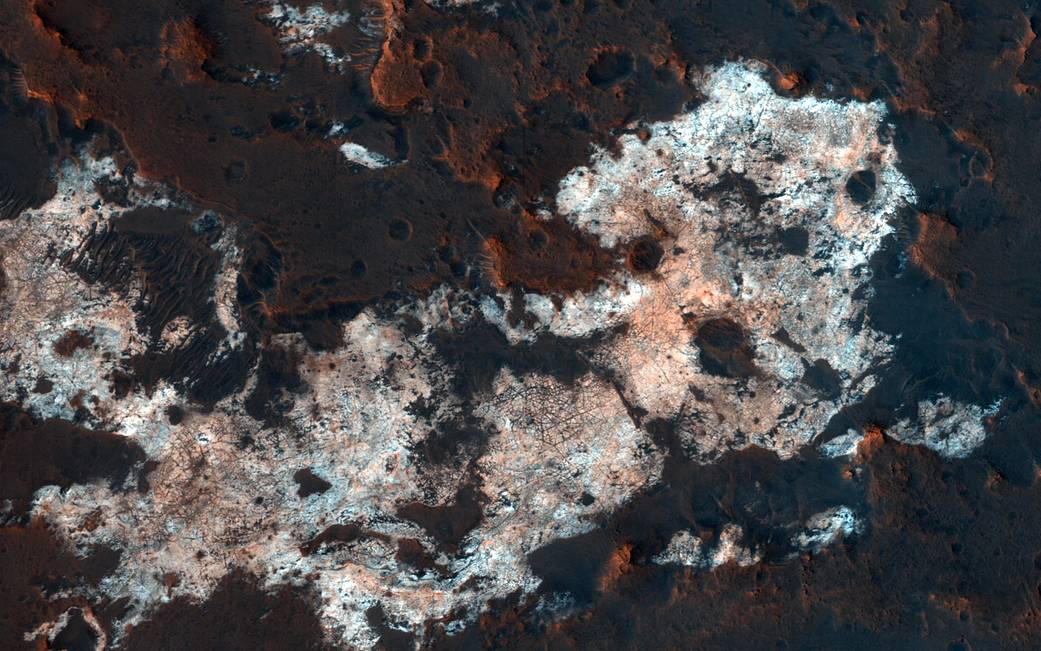 The combination of morphological and topographic information from stereo images from NASA's Mars Reconnaissance Orbiter, as well as compositional data from near-infrared spectroscopy has been proven to be a powerful tool for understanding the geology of Mars.
Beginning with the OMEGA instrument on the European Space Agency's Mars Express orbiter in 2003, the surface of Mars has been examined at near-infrared wavelengths by imaging spectrometers that are capable of detecting specific minerals and mapping their spatial extent. The CRISM (Compact Reconnaissance Imaging Spectrometer for Mars) instrument on our orbiter is a visible/near-infrared imaging spectrometer, and the HiRISE camera works together with it to document the appearance of mineral deposits detected by this orbital prospecting.
Mawrth Vallis is one of the regions on Mars that has attracted much attention because of the nature and diversity of the minerals identified by these spectrometers. It is a large, ancient outflow channel on the margin of the Southern highlands and Northern lowlands. Both the OMEGA and CRISM instruments have detected clay minerals here that must have been deposited in a water-rich environment, probably more than 4 billion years ago. For this reason, Mawrth Vallis is one of the two candidate landing sites for the future Mars Express Rover Mission planned by the European Space Agency.
This image was targeted on a location where the CRISM instrument detected a specific mineral called alunite, KAl3(SO4)2(OH)6. Alunite is a hydrated aluminum potassium sulfate, a mineral that is notable because it must have been deposited in a wet acidic environment, rich in sulfuric acid. Our image shows that the deposit is bright and colorful, and extensively fractured. The width of the cutout is 1.2 kilometers.
The University of Arizona, Tucson, operates HiRISE, which was built by Ball Aerospace & Technologies Corp., Boulder, Colo. NASA's Jet Propulsion Laboratory, a division of Caltech in Pasadena, California, manages the Mars Reconnaissance Orbiter Project for NASA's Science Mission Directorate, Washington.
Image credit: NASA/JPL-Caltech/Univ. of Arizona
Image download options
Editor: Tony Greicius
Publicado por salud equitativa en 11:44