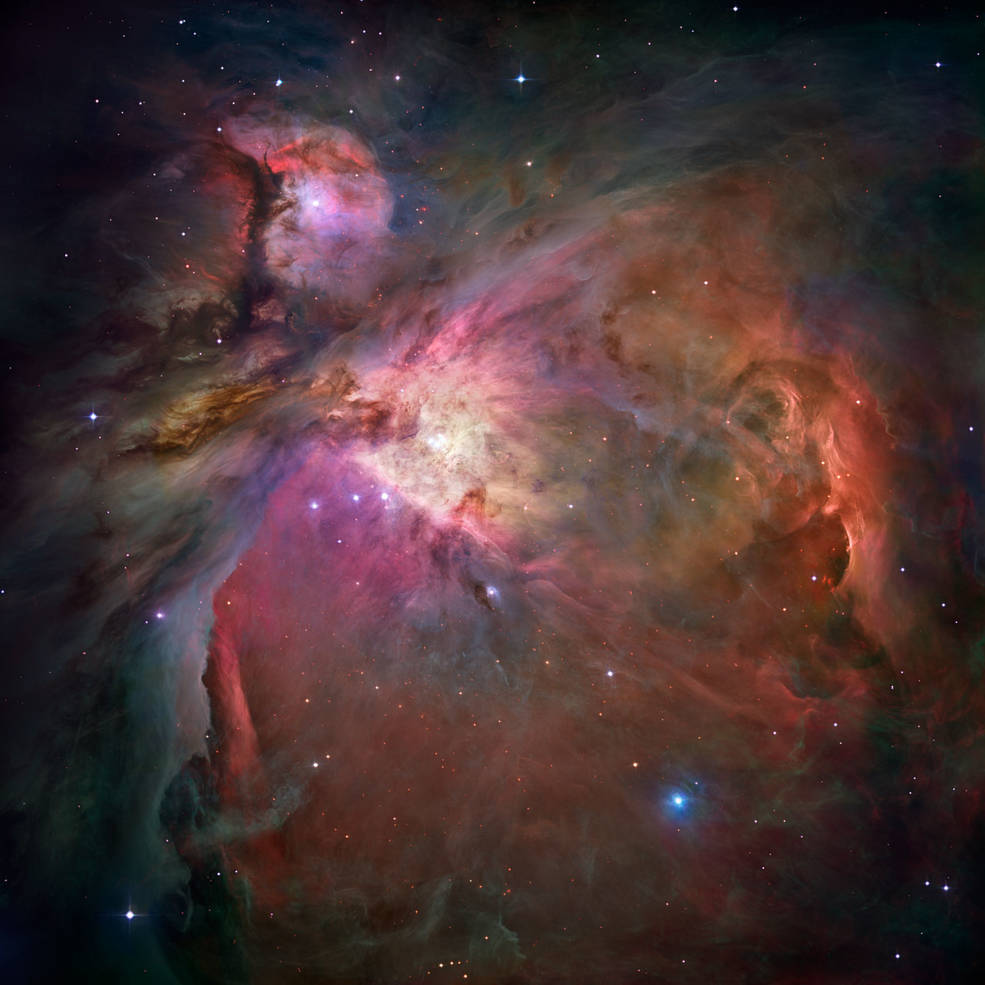 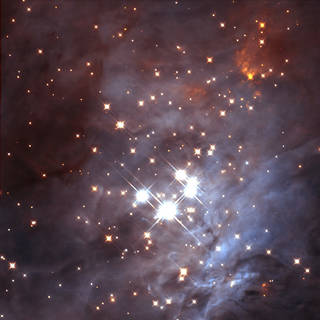 Appearing like glistening precious stones, M42’s Trapezium cluster, named for the trapezoidal arrangement of its central massive stars, is seen in this infrared Hubble image. All of the members of the Trapezium were born together in this hotbed of star formation.
Credits: K.L. Luhman (Harvard-Smithsonian Center for Astrophysics, Cambridge, Mass.); and G. Schneider, E. Young, G. Rieke, A. Cotera, H. Chen, M. Rieke, R. Thompson (Steward Observatory, University of Arizona, Tucson, Ariz.) and NASA/ESA 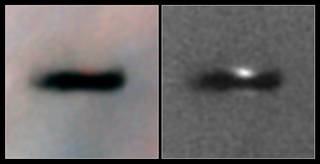 Resembling an interstellar Frisbee, the dark feature in these two Hubble images is a protoplanetary disk of dust seen edge-on around a newborn star in M42. The two images show the disk through two different sets of filters: one to probe the disk’s chemical composition (left) and another to reduce the brightness of the nebula, revealing brighter regions above and below the disk that betray the presence of the star (right). Because the disk is edge-on, its star is largely hidden, but the disk may be an embryonic planetary system in the making. Our solar system probably formed out of such a disk 4.5 billion years ago.
Credits: Mark McCaughrean (Max-Planck-Institute for Astronomy), C. Robert O'Dell (Rice University) and NASA
Believed to be the cosmic fire of creation by the Maya of Mesoamerica, M42 blazes brightly in the constellation Orion. Popularly called the Orion Nebula, this stellar nursery has been known to many different cultures throughout human history. The nebula is only 1,500 light-years away, making it the closest large star-forming region to Earth and giving it a relatively bright apparent magnitude of 4. Because of its brightness and prominent location just below Orion’s belt, M42 can be spotted with the naked eye, while offering an excellent peek at stellar birth for those with telescopes. It is best observed during January.
The Mayan culture’s likening of the Orion Nebula to a cosmic fire of creation is very apt. The nebula is an enormous cloud of dust and gas where vast numbers of new stars are being forged. Its bright, central region is the home of four massive, young stars that shape the nebula. The four hefty stars are called the Trapezium because they are arranged in a trapezoidal pattern. Ultraviolet light unleashed by these stars is carving a cavity in the nebula and disrupting the growth of hundreds of smaller stars.
This stunning Hubble image offers the sharpest view of the Orion Nebula ever obtained. Created using 520 different Hubble exposures taken in multiple wavelengths of light, this mosaic contains over one billion pixels. Hubble imaged most of the nebula, but ground-based images were used to fill in the gaps in its observations. The orange color in the image can be attributed to hydrogen, green represents oxygen, and the red represents both sulfur and observations made in infrared light.
For more information about Hubble’s observations of M42, see:
http://hubblesite.org/news_release/news/2006-01
http://hubblesite.org/news_release/news/2017-11
http://hubblesite.org/news_release/news/2002-05
http://hubblesite.org/news_release/news/2001-13
http://hubblesite.org/news_release/news/2000-19
http://hubblesite.org/news_release/news/1995-45

This star chart for M42 represents the view from mid-northern latitudes for the given month and time.
Credits: Image courtesy of Stellarium
Editor: Rob Garner
Publicado por salud equitativa en 8:24