In 2019, NASA celebrated the 50th anniversary of the agency’s Apollo 11 Moon landing, the most historic moment in space exploration, while also making significant progress toward putting the first woman and next man on the Moon by 2024 under the Artemis program.
Through America’s Moon to Mars exploration approach, Artemis gained bipartisan support this year among members of Congress, the U.S aerospace industry, as well as with international partners, including Canada, Australia, and Japan, and member states of the European Space Agency.
“2019 will be remembered as the year the Artemis program really became a reality with real spaceflight hardware built, U.S. commercial and international partnerships standing behind it, and hardworking teams across NASA and the world coming together like never before to quickly and sustainably explore the Moon and use what we learn there to enable humanity’s next giant leap – sending astronauts to Mars,” said NASA Administrator Jim Bridenstine. “While the Artemis program came into sharp focus this year, NASA continued to show what leading in space exploration is all about, whether it was kicking off 2019 with New Horizons’ historic Kuiper Belt object flyby, conducting the first all-woman spacewalk outside the International Space Station, or developing the first flying robotic explorer to study Saturn’s moon Titan. And wait until you see what we do in 2020!”
The Office of the Chief Financial Officer received a successful clean audit in 2019 – the ninth consecutive clean financial audit opinion for the agency. And for the eighth year in a row, NASA retained its standing as the number one large agency in the Best Places to Work in Government rankings, published by the Partnership for Public Service.
“Throughout this year, as I have visited each of our centers, I have personally witnessed their unparalleled commitment to accomplishing our mission. The daily devotion of our employees makes them well deserving of this award,” Bridenstine said. “I am honored to lead such a dedicated team. They are what makes NASA the Best Place to Work in Government."
Moon to MarsThis year, NASA officially named the new lunar exploration program Artemis, for the goddess of the Moon and twin sister of Apollo. Under Artemis, NASA will send new science instruments and technology demonstrations to study the Moon, accelerate plans to send astronauts to the Moon by 2024, and establish sustainable lunar exploration by 2028.
Science and technology progress in Artemis includes:
NASA continues to advance development of our Space Launch System (SLS) rocket and Orion spacecraft, which will send astronauts to deep space.
Work also began on hardware for Artemis II, the first SLS/Orion test flight with astronauts aboard. NASA and Northrop Grumman technicians applied insulation to the final booster motor segment of SLS and completed casting of all 10 booster motor segments. The agency also issued a request for proposals from U.S. small satellite developers to fly their missions as secondary payloads on Artemis II. 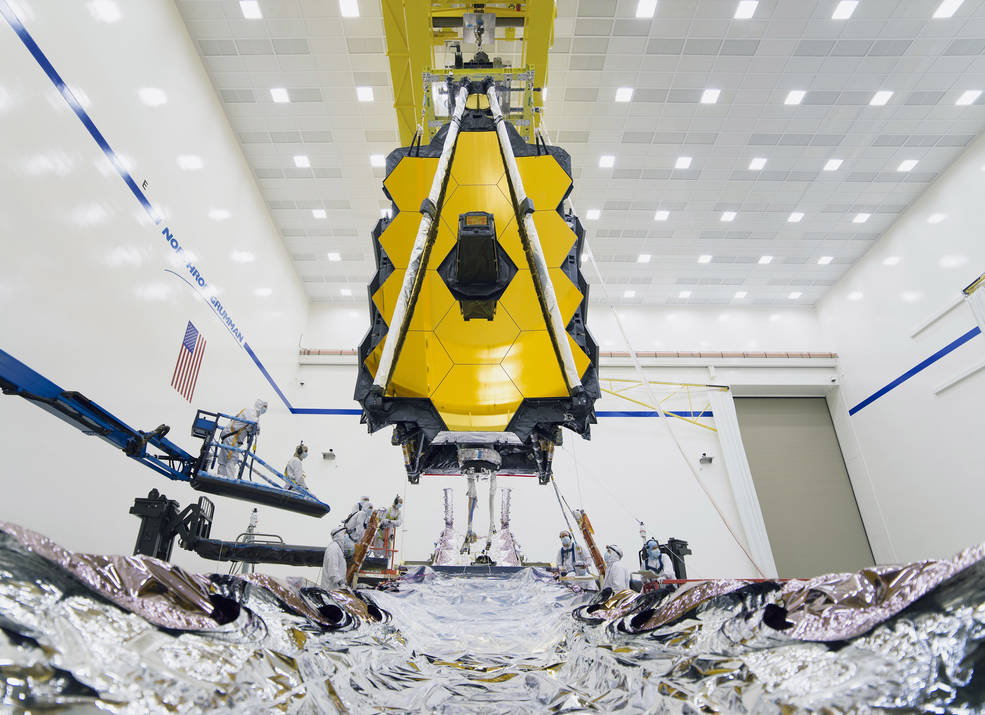 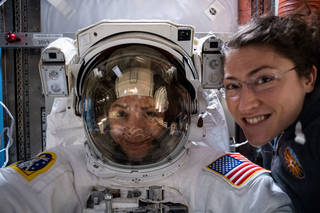 NASA astronaut Christina Koch (right) poses for a portrait with fellow Expedition 61 Flight Engineer Jessica Meir of NASA, who is inside a U.S. spacesuit for a fit check. The two are preparing for their first spacewalk together on Oct. 18, 2019, to replace a failed power controller on the International Space Station's P6 truss structure.
Credits: NASA
NASA astronauts Anne McClain, Nick Hague, Christina Koch, Andrew Morgan, and Jessica Meir of the 2013 astronaut class all participated in their first spaceflight missions to the International Space Station. Each also conducted their first spacewalks, including the first all-woman spacewalk with Meir and Koch.
The space station is facilitating a strong commercial market in low-Earth orbit for research, technology development, and crew and cargo transportation, and remains the sole space-based proving ground and stepping stone for the Artemis program. In 2019:
FlightNASA’s aeronautics team reached several major milestones in its efforts to enable commercial supersonic air travel over land. 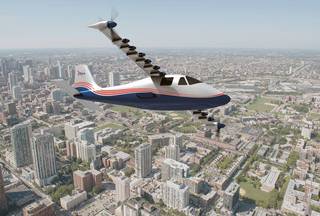 This illustration of NASA's X-57 Maxwell aircraft shows the plane's specially designed wing and 14 electric motors. NASA Aeronautics researchers will use the Maxwell to demonstrate that electric propulsion can make planes quieter, more efficient and more environmentally friendly.
Credits: NASA
NASA’s research into electric-powered flight with the X-57 Maxwell made headlines throughout the year.
Another major aeronautics focus was NASA’s ongoing work in Urban Air Mobility – a safe and efficient system for passenger and cargo air transportation.
Continuing other avenues of research in aviation technology, the agency:
Space TechnologyAs NASA embarked on the next era of exploration in 2019, the agency continued to advance technologies needed for a sustainable human presence on the Moon and future human missions to Mars.
Earth 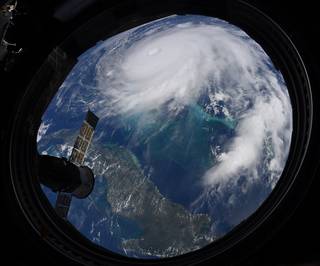 NASA astronaut Christina Koch snapped this image of Hurricane Dorian from the International Space Station as it flew more than 200 miles above the storm on Sept. 2, 2019.
Credits: NASA/Christina Koch
NASA continued to use its perspective of Earth from space to improve lives and revolutionize our understanding of how our planet is changing.
STEM EngagementNASA provided more than $32 million in financial support to more than 8,000 students participating in internships and fellowships through its: Minority University Research and Education Project (MUREP); Established Program to Stimulate Competitive Research (EPSCoR); Space Grant Project; and Next Gen STEM. Nearly 40% of the opportunities were filled by women, and 30% went to racial or ethnic minorities.
Participating in NASA’s Micro-g Neutral Buoyancy Experiment Design Team (Micro-g NExT) program, Team CERO, from Lone Star College-CyFair in Cypress, Texas, became the first team to have their tool sent to the International Space Station, where it was used during a spacewalk on Nov. 22 to repair the Alpha Magnetic Spectrometer.
NASA also engaged students, educators and the public in STEM through a series of public events including:
Public EngagementNASA is dedicated to engaging the public in the excitement, accomplishments and opportunities available only through the nation’s space program. The agency hosted and participated in events across the country marking the 50th anniversary of the first Apollo Moon landing in July 1969, including two events in Washington: a concert on July 20 at the Kennedy Center for the Performing Arts co-hosted by former Myth Busters host Adam Savage, and a three-day festival on the National Mall that featured exhibits and talks and had more than 50,000 attendees.
Other public events included: 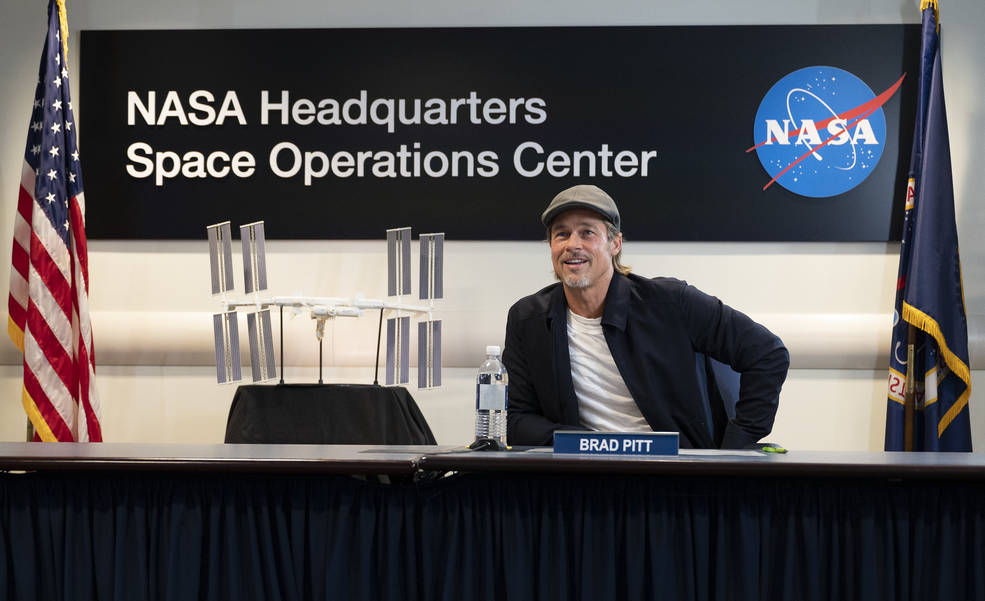 Actor Brad Pitt talks to NASA astronaut Nick Hague who is onboard the International Space Station, Sept. 16, 2019, from the Space Operations Center at NASA Headquarters in Washington. Pitt, who stars as an astronaut in his latest film “Ad Astra,” spoke with Hague about what it’s like to live and work aboard the orbiting laboratory.
Credits: NASA/Joel Kowsky
NASA had a significant exhibit presence at two high-profile annual space policy conferences: Space Symposium, which brought together space industry leaders and entrepreneurs from around the globe to discuss the current and future state of space exploration; and the International Astronautical Congress, hosted this year by NASA and during which more than 6,660 people visited the agency’s exhibit.
NASA now has more than 219.7 million social media followers – up from 187 million in 2018. In addition to increasing engagement on various platforms, the agency hosted 10 NASA Social events, bringing together nearly 500 followers for unique, in-person experiences of exploration and discovery. The agency’s social media activity was honored in April with two Webby Awards and two People's Voice awards.
The agency’s website received its 11th People's Voice Award in the Government & Civil Innovation category. The busiest day for the website was April 10, when NASA shared a black hole image from the National Science Foundation, which had 1.7 million visits. The second-busiest day, with 1.6 million visits, was May 21, when NASA invited to the public to send their names to Mars on the Mars 2020 rover.
The agency launched two new mediums to communicate with the public. In March, NASA debuted a weekly email newsletter that already has more than 1.1 million subscribers. In September, NASA TV launched a new video series called #AskNASA, in which agency experts answer questions from the public about its incredible mission.
The Academy of Television Arts & Sciences recognized NASA’s engagement efforts in September with two Emmy Awards for its coverage of the landing on Mars of NASA's InSight mission and the agency's first test of a spacecraft that will help bring crewed launches to the International Space Station back to U.S. soil.
For more about NASA’s missions, research and discoveries, visit:
https://www.nasa.gov
-end-
Bettina InclànHeadquarters, Washington202-358-1600bettina.inclan@nasa.gov
Editor: Karen Northon
Publicado por salud equitativa en 11:44