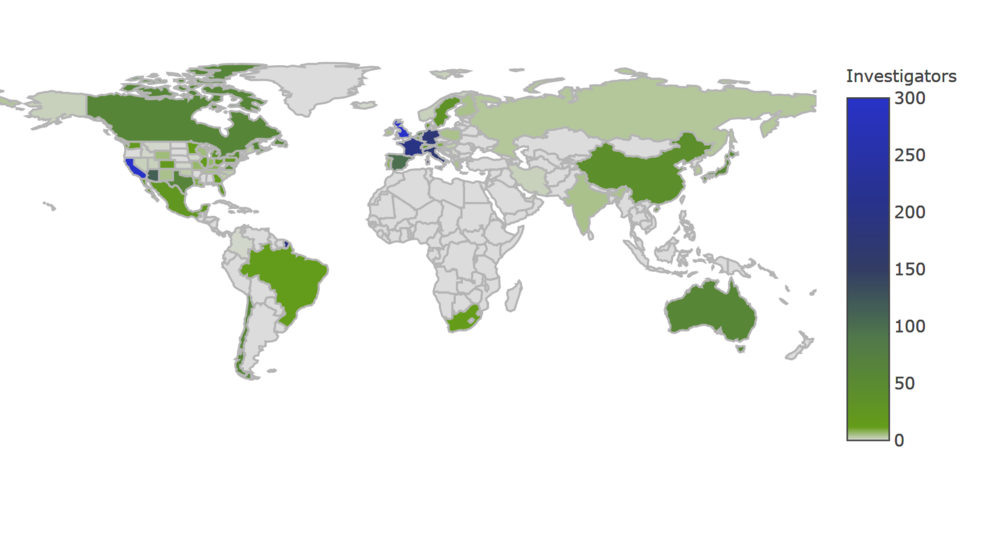 Graph showing the number of investigators and collaborators who took part in the Early Release Science (ERS) program, broken down by country (and in the U.S., by state and territory).
Credits: NASA/STScI
Proposals chosen for ERS will be among the first scientific observations made with the Webb telescope. The proposals involved scientists from 43 U.S. states, stretching from coast to coast and including Hawaii and Alaska, and one U.S. territory; 19 European countries, including the United Kingdom, Ireland, France, Germany and Italy; and several other countries spanning the globe, from Canada to Japan. Teams of scientists, the largest with 138 members, together amounted to nearly 3,000 investigators and collaborators taking part in the ERS program.
“The tremendous response to the ERS opportunity shows that scientists from around the world are eagerly awaiting data from Webb, which they will use to answer some of the most profound questions in astronomy, from planets to the most distant galaxies,” said Jonathan Gardner, the deputy senior project scientist for Webb telescope at the NASA’s Goddard Space Flight Center in Greenbelt, Maryland.
The ERS program aims to give the entire astronomical community access to scientific data from Webb early in the telescope’s mission, with the goal of maximizing the amount of science astronomers can conduct within the telescope’s lifetime. The proposals span the main science themes of Webb, and use one or more of the telescope’s science instruments and the different observation modes they have. 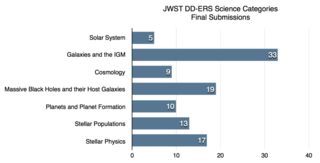 Graph showing the number of Early Release Science (ERS) proposal submissions per focus area.
Credits: NASA/STScI
Klaus Pontoppidan, the deputy project scientist for Webb at the Space Telescope Science Institute (STScI) in Baltimore, Maryland, explained the ERS teams must provide the community with “science-enhancing products,” which include how-to seminars and software tools.
Though the proposed science equals almost 3,700 hours of observation time for the Webb telescope, only up to 500 hours of observation time have been made available for the ERS program by Dr. Kenneth Sembach, the director of STScI. Panels of reviewers from the international astronomical community will evaluate each ERS proposal and make recommendations about which proposals to pursue. There will be another call for proposals in November for the remaining observation time in Webb’s first year; after that, observations for the telescope will be allocated annually.
Of the seven total science categories for ERS submission, galaxies and the intergalactic medium (IGM) had the most proposals. The IGM is the large amount of space between galaxies, sparsely filled with hot gas. The other categories were massive black holes and their host galaxies, stellar physics, stellar populations, planets and planet formation, cosmology, and the solar system.
“With the ERS submissions, we are for the first time getting a detailed first look at how the astronomical community would like to use the James Webb Space Telescope for amazing new science,” said Pontoppidan. “It is also incredibly exciting to see the many observing tools that we have been working on for years to finally be used as intended.”
The James Webb Space Telescope is the scientific complement to NASA's Hubble Space Telescope. It will be the most powerful space telescope ever built. Webb is an international project led by NASA with its partners, ESA (European Space Agency) and the Canadian Space Agency.
For more information about the Webb telescope, visit: www.jwst.nasa.gov or www.nasa.gov/webb
By Eric VillardNASA Goddard Space Flight Center
Editor: Lynn Jenner
Publicado por salud equitativa en 10:20