This is a reconstructed view of Jupiter’s northern lights through the filters of the Juno Ultraviolet Imaging Spectrograph instrument on Dec. 11, 2016, as the Juno spacecraft approached Jupiter, passed over its poles, and plunged towards the equator.
Credits: NASA/JPL-Caltech/Bertrand Bonfond
Full image and caption
Scientists on NASA’s Juno mission have observed massive amounts of energy swirling over Jupiter’s polar regions that contribute to the giant planet’s powerful aurora – only not in ways the researchers expected.
Examining data collected by the ultraviolet spectrograph and energetic-particle detector instruments aboard the Jupiter-orbiting Juno spacecraft, a team led by Barry Mauk of the Johns Hopkins University Applied Physics Laboratory, Laurel, Maryland, observed signatures of powerful electric potentials, aligned with Jupiter’s magnetic field, that accelerate electrons toward the Jovian atmosphere at energies up to 400,000 electron volts. This is 10 to 30 times higher than the largest auroral potentials observed at Earth, where only several thousands of volts are typically needed to generate the most intense aurora -- known as discrete aurora -- the dazzling, twisting, snake-like northern and southern lights seen in places like Alaska and Canada, northern Europe, and many other northern and southern polar regions. 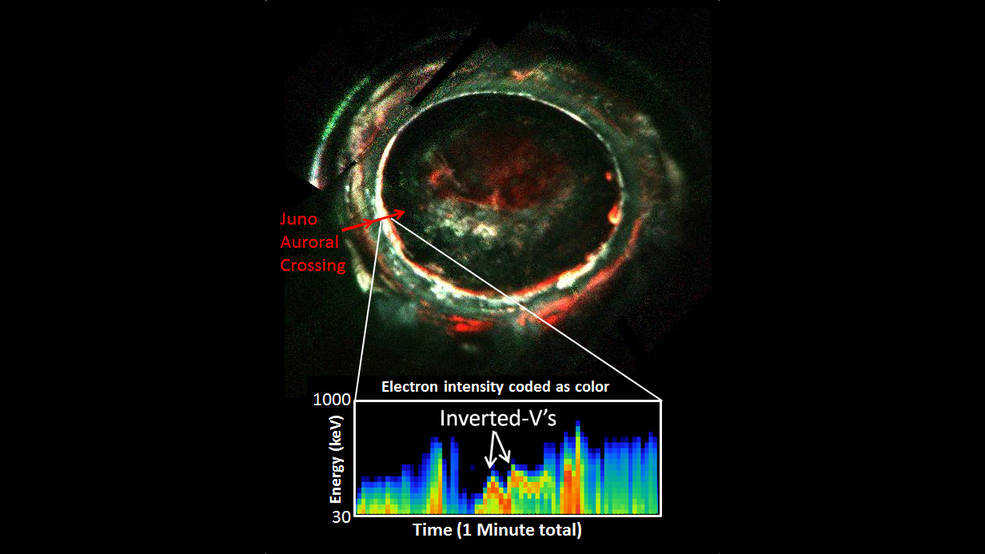 This image, created with data from Juno’s Ultraviolet Imaging Spectrograph, marks the path of Juno’s readings of Jupiter’s aurora, highlighting the electron measurements that show the discovery of the so-called discrete auroral acceleration processes indicated by the “inverted Vs” in the lower panel.
Credits: NASA/JPL-Caltech/SwRI/Randy Gladstone
Full image and caption
Jupiter has the most powerful aurora in the solar system, so the team was not surprised that electric potentials play a role in their generation. What’s puzzling the researchers, Mauk said, is that despite the magnitudes of these potentials at Jupiter, they are observed only sometimes and are not the source of the most intense auroras, as they are at Earth.
“At Jupiter, the brightest auroras are caused by some kind of turbulent acceleration process that we do not understand very well,” said Mauk, who leads the investigation team for the APL-built Jupiter Energetic Particle Detector Instrument (JEDI). “There are hints in our latest data indicating that as the power density of the auroral generation becomes stronger and stronger, the process becomes unstable and a new acceleration process takes over. But we’ll have to keep looking at the data.”
Scientists consider Jupiter to be a physics lab of sorts for worlds beyond our solar system, saying the ability of Jupiter to accelerate charged particles to immense energies has implications for how more distant astrophysical systems accelerate particles. But what they learn about the forces driving Jupiter’s aurora and shaping its space weather environment also has practical implications in our own planetary backyard.
“The highest energies that we are observing within Jupiter’s auroral regions are formidable. These energetic particles that create the aurora are part of the story in understanding Jupiter’s radiation belts, which pose such a challenge to Juno and to upcoming spacecraft missions to Jupiter under development,” said Mauk. “Engineering around the debilitating effects of radiation has always been a challenge to spacecraft engineers for missions at Earth and elsewhere in the solar system. What we learn here, and from spacecraft like NASA’s Van Allen Probes and Magnetospheric Multiscale mission (MMS) that are exploring Earth’s magnetosphere, will teach us a lot about space weather and protecting spacecraft and astronauts in harsh space environments. Comparing the processes at Jupiter and Earth is incredibly valuable in testing our ideas of how planetary physics works.”
Mauk and colleagues present their findings in the Sept. 7 issue of the journal Nature.
NASA’s Jet Propulsion Laboratory, Pasadena, California, manages the Juno mission for the principal investigator, Scott Bolton, of the Southwest Research Institute in San Antonio. Juno is part of NASA’s New Frontiers Program, which is managed at NASA’s Marshall Space Flight Center in Huntsville, Alabama, for NASA’s Science Mission Directorate. Lockheed Martin Space Systems, Denver, built the spacecraft.
https://www.nasa.gov/juno
https://www.missionjuno.swri.edu
The public can follow the mission on Facebook and Twitter at:
https://www.facebook.com/NASAJuno
https://www.twitter.com/NASAJuno
More information on Jupiter can be found at:
https://www.nasa.gov/jupiter
DC AgleJet Propulsion Laboratory, Pasadena, Calif.818-393-9011 / 818-354-6278agle@jpl.nasa.gov
Michael BuckleyJohns Hopkins University Applied Physics Laboratory443-778-7536Michael.Buckley@jhuapl.edu
Dwayne Brown / Laurie CantilloNASA Headquarters, Washington202-358-1726 / 202-358-1077dwayne.c.brown@nasa.gov / laura.l.cantillo@nasa.gov
2017-236
Editor: Tony Greicius
Publicado por salud equitativa en 11:40