NASA’s New Horizons mission has set the distance for its New Year’s Day 2019 flyby of Kuiper Belt object 2014 MU69, aiming to come three times closer to MU69 than it famously flew past Pluto in 2015.
That milestone will mark the farthest planetary encounter in history – some one billion miles (1.5 billion kilometers) beyond Pluto and more than four billion miles (6.5 billion kilometers) from Earth. If all goes as planned, New Horizons will come to within just 2,175 miles (3,500 kilometers) of MU69 at closest approach, peering down on it from celestial north. The alternate plan, to be employed in certain contingency situations such as the discovery of debris near MU69, would take New Horizons within 6,000 miles (10,000 kilometers)— still closer than the 7,800-mile (12,500-kilometer) flyby distance to Pluto. 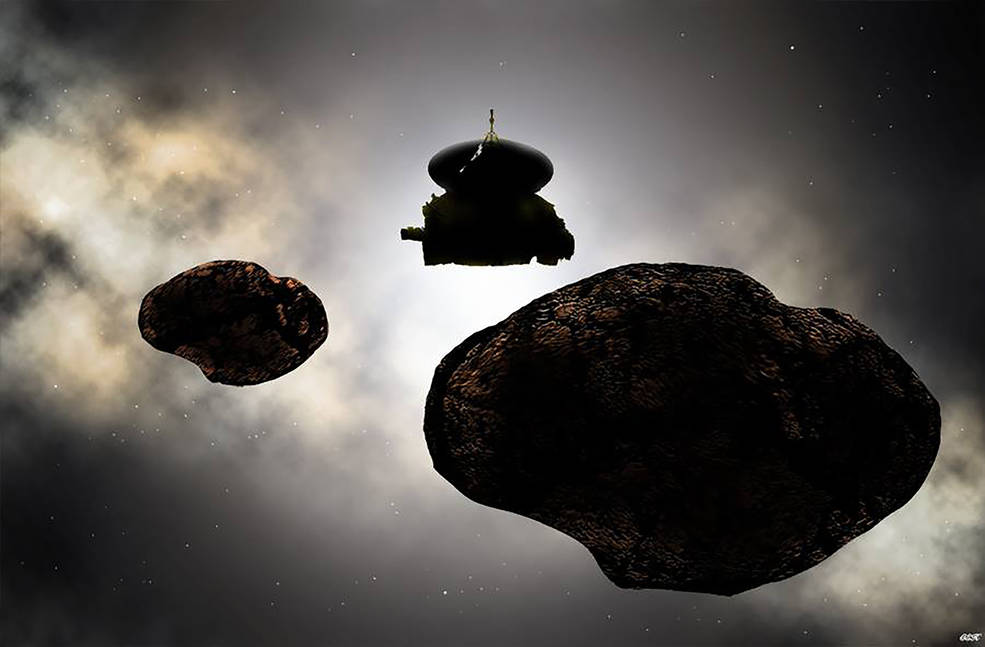 Artist's concept of NASA’s New Horizons spacecraft flying by a possible binary 2014 MU69 on Jan. 1, 2019. Early observations of MU69 hint at the Kuiper Belt object being either a binary orbiting pair or a contact (stuck together) pair of nearly like-sized bodies with diameters near 20 and 18 kilometers (12 and 11 miles).
Credits: Carlos Hernandez
“I couldn’t be more excited about this encore performance from New Horizons,” said NASA Planetary Science Director Jim Green at Headquarters in Washington. “This mission keeps pushing the limits of what’s possible, and I’m looking forward to the images and data of the most distant object any spacecraft has ever explored.”
If the closer approach is executed, the highest-resolution camera on New Horizons, the telescopic Long Range Reconnaissance Imager (LORRI) should be able to spot details as small as 230 feet (70 meters) across, for example, compared to nearly 600 feet (183 meters) on Pluto.
“We’re planning to fly closer to MU69 than Pluto to get even higher resolution imagery and other datasets,” said New Horizons Principal Investigator Alan Stern, of the Southwest Research Institute (SwRI), Boulder, Colorado. “The science should be spectacular.”
The team weighed numerous factors in making its choice, said science team member and flyby planning lead John Spencer, also of SwRI. “The considerations included what is known about MU69’s size, shape  and the likelihood of hazards near it, the challenges of navigating close to MU69 while obtaining sharp and well-exposed images, and other spacecraft resources and capabilities,” he said.
Using all seven onboard science instruments, New Horizons will obtain extensive geological, geophysical, compositional, and other data on MU69; it will also search for an atmosphere and moons.
“Reaching 2014 MU69, and seeing it as an actual new world, will be another historic exploration achievement,” said Helene Winters, the New Horizons project manager from the Johns Hopkins University Applied Physics Laboratory in Laurel, Maryland.  “We are truly going where no one has gone before. Our whole team is excited about the challenges and opportunities of a voyage to this faraway frontier.”
How do we know what we know about 2014 MU69? Read about the New Horizons KBO Chasers and the work to observe this distant Kuiper Belt object from Earth.
Editor: Bill Keeter
Publicado por salud equitativa en 11:50