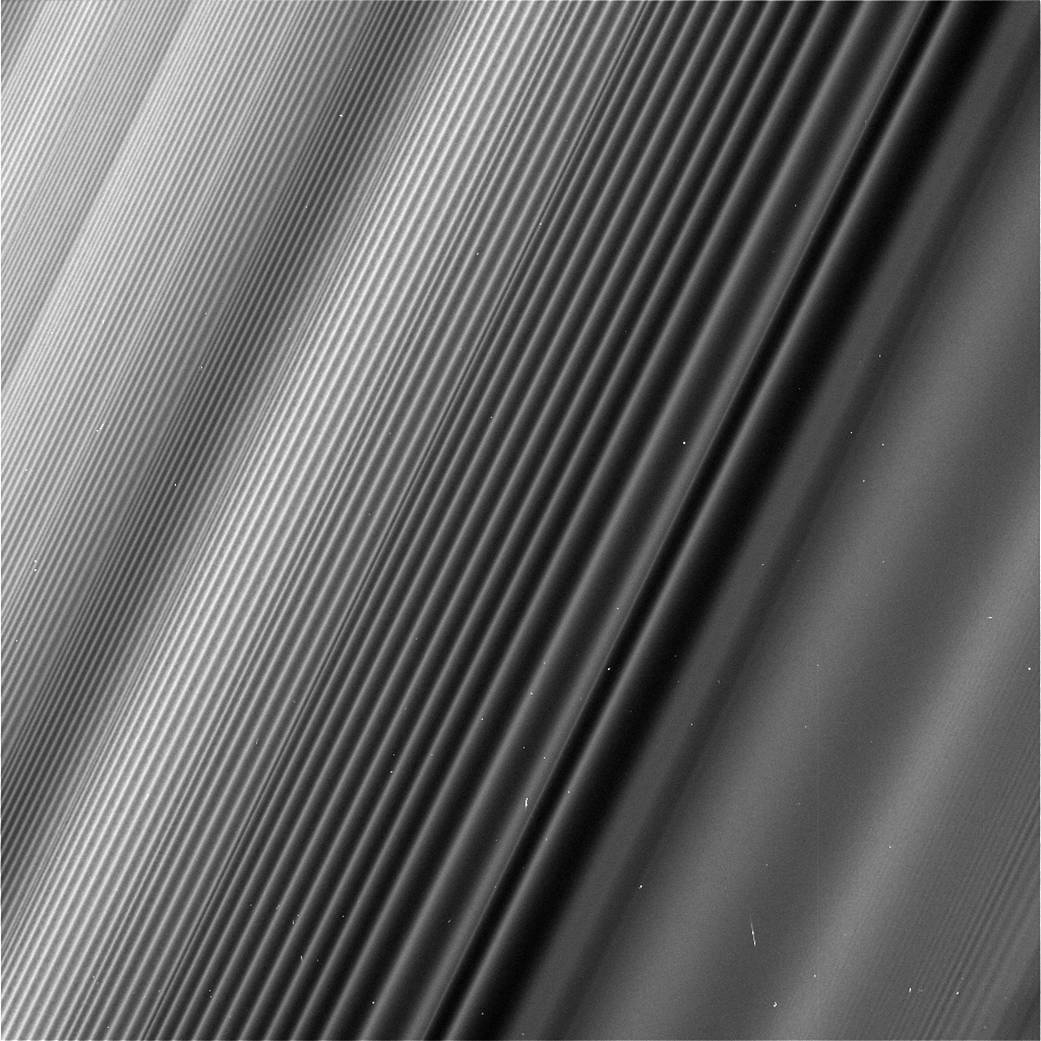 This view from NASA's Cassini spacecraft shows a wave structure in Saturn's rings known as the Janus 2:1 spiral density wave. Resulting from the same process that creates spiral galaxies, spiral density waves in Saturn’s rings are much more tightly wound. In this case, every second wave crest is actually the same spiral arm which has encircled the entire planet multiple times.
This is the only major density wave visible in Saturn's B ring. Most of the B ring is characterized by structures that dominate the areas where density waves might otherwise occur, but this innermost portion of the B ring is different.
The radius from Saturn at which the wave originates (toward lower-right in this image) is 59,796 miles (96,233 kilometers) from the planet. At this location, ring particles orbit Saturn twice for every time the moon Janus orbits once, creating an orbital resonance. The wave propagates outward from the resonance (and away from Saturn), toward upper-left in this view. For reasons researchers do not entirely understand, damping of waves by larger ring structures is very weak at this location, so this wave is seen ringing for hundreds of bright wave crests, unlike density waves in Saturn's A ring.
The image gives the illusion that the ring plane is tilted away from the camera toward upper-left, but this is not the case. Because of the mechanics of how this kind of wave propagates, the wavelength decreases with distance from the resonance. Thus, the upper-left of the image is just as close to the camera as the lower-right, while the wavelength of the density wave is simply shorter.
This wave is remarkable because Janus, the moon that generates it, is in a strange orbital configuration. Janus and Epimetheus (see PIA12602) share practically the same orbit and trade places every four years. Every time one of those orbit swaps takes place, the ring at this location responds, spawning a new crest in the wave. The distance between any pair of crests corresponds to four years’ worth of the wave propagating downstream from the resonance, which means the wave seen here encodes many decades’ worth of the orbital history of Janus and Epimetheus. According to this interpretation, the part of the wave at the very upper-left of this image corresponds to the positions of Janus and Epimetheus around the time of the Voyager flybys in 1980 and 1981, which is the time at which Janus and Epimetheus were first proven to be two distinct objects (they were first observed in 1966).
Epimetheus also generates waves at this location, but they are swamped by the waves from Janus, since Janus is the larger of the two moons.
This image was taken on June 4, 2017, with the Cassini spacecraft narrow-angle camera. The image was acquired on the sunlit side of the rings from a distance of 47,000 miles (76,000 kilometers) away from the area pictured. The image scale is 1,730 feet (530 meters) per pixel. The phase angle, or sun-ring-spacecraft angle, is 90 degrees.
The Cassini mission is a cooperative project of NASA, ESA (the European Space Agency) and the Italian Space Agency. The Jet Propulsion Laboratory, a division of Caltech in Pasadena, manages the mission for NASA's Science Mission Directorate, Washington. The Cassini orbiter and its two onboard cameras were designed, developed and assembled at JPL. The imaging operations center is based at the Space Science Institute in Boulder, Colorado.
For more information about the Cassini-Huygens mission visit https://saturn.jpl.nasa.gov and https://www.nasa.gov/cassini. The Cassini imaging team homepage is at https://ciclops.org.
Image Credit: NASA/JPL-Caltech/Space Science Institute
Editor: Tony Greicius