in a Small Package

This gif shows a series of images from a single observation of a star by the ASTERIA spacecraft. In the first few images, the star appears to move as ASTERIA slews to and then locks onto the target star. Throughout the remainder of the frames, the spacecraft remains locked on the target star.
Credits: NASA/JPL-Caltech
The ASTERIA satellite, which was deployed into low-Earth orbit in November, is only slightly larger than a box of cereal, but it could be used to help astrophysicists study planets orbiting other stars.
Mission managers at NASA’s Jet Propulsion Laboratory in Pasadena, California, recently announced that ASTERIA has accomplished all of its primary mission objectives, demonstrating that the miniaturized technologies on board can operate in space as expected. This marks the success of one of the world’s first astrophysics CubeSat missions, and shows that small, low-cost satellites could be used to assist in future studies of the universe beyond the solar system.
“ASTERIA is small but mighty,” said Mission Manager Matthew W. Smith of JPL. “Packing the capabilities of a much larger spacecraft into a small footprint was a challenge, but in the end we demonstrated cutting-edge performance for a system this size.” 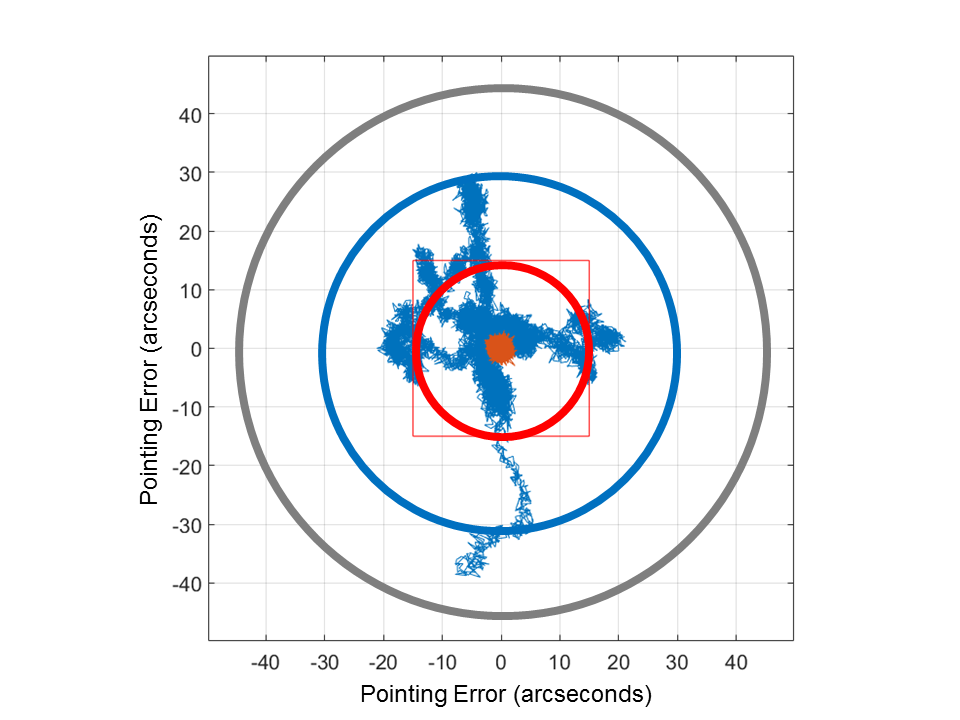 This graph shows the precise position of a star as seen by ASTERIA. The colored tracks show the path of ASTERIA’s pointing system as it attempts to hold steady on a target. The blue tracks show the spacecraft’s pointing ability using coarse pointing control, but to reach the desired level of stability, ASTERIA engages what is known as two-stage fine pointing control, shown in orange. Arcseconds are a measure of angle on the sky, used to measure the apparent size of objects or and distances that objects travel.(The full moon is about 1800 arcseconds wide).
Credits: NASA/JPL-Caltech
Seeing Stars
ASTERIA, or the Arcsecond Space Telescope Enabling Research in Astrophysics, weighs only 22 pounds (10 kilograms). It carries a payload for measuring the brightness of stars, which allows researchers to monitor nearby stars for orbiting exoplanets that cause a brief drop in brightness as they block the starlight.
This approach to finding and studying exoplanets is called the transit method. NASA’s Kepler Space Telescope has detected more than 2,300 confirmed planets using this method, more than any other planet-hunting observatory. The agency’s next large-scale, space-based planet-hunting observatory, the Transiting Exoplanet Survey Satellite (TESS), is anticipated to discover thousands of exoplanets and scheduled to launch from Cape Canaveral Air Force Station in Florida on April 16. 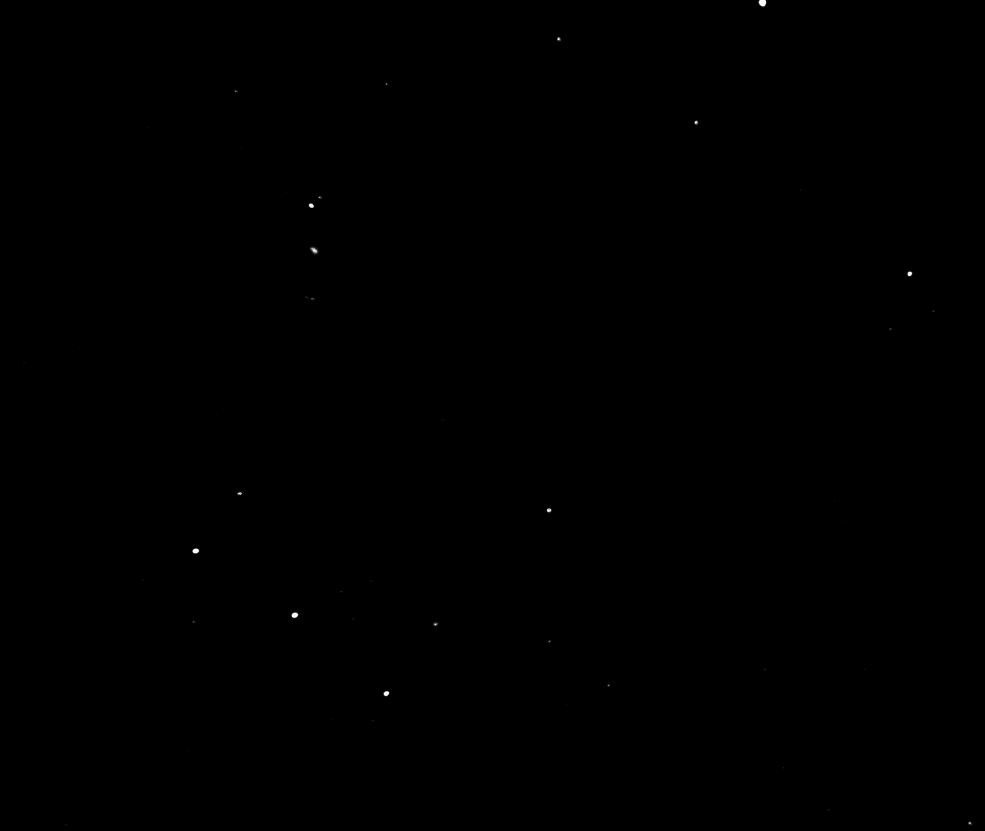 A snapshot of the sky taken by ASTERIA, showing the spacecraft’s full field of view; the constellation is visible in the bottom right. Images from the satellite are cropped when scientists want to monitor an individual star.
Credits: NASA/JPL-Caltech
In the future, small satellites like ASTERIA could serve as a low-cost method to identify transiting exoplanets orbiting bright, Sun-like stars. These small satellites could be used to look for planetary transits when larger observatories are not available, and planets of interest could then be studied in more detail by other telescopes. Small satellites like ASTERIA could also be used to study certain star systems that are not within the field of view of larger observatories, and most significantly, focus on star systems that have planets with long orbits that require long observation campaigns.
The ASTERIA team has now demonstrated that the satellite’s payload can point directly and steadily at a bright source for an extended period of time, a key requirement for performing the precision photometry necessary to study exoplanets via the transit method.

ASTERIA was deployed from the International Space Station on November 20, 2017.
Credits: NASA/JPL-Caltech
Holding steady on a faraway star is difficult because there are many things that subtly push and pull on the satellite, such as Earth’s atmosphere and magnetic field. ASTERIA’s payload achieved a pointing stability of 0.5 arcseconds RMS, which refers to the degree to which the payload wobbles away from its intended target over a 20-minute observation period. The pointing stability was repeated over multiple orbits, with the stars positioned on the same pixels on each orbit.
“That’s like being able to hit a quarter with a laser pointer from about a mile away,” said Christopher Pong, the attitude and pointing control engineer for ASTERIA at JPL. “The laser beam has to stay inside the edge of the quarter, and then the satellite has to be able to hit that exact same quarter -- or star -- over multiple orbits around the Earth. So what we’ve accomplished is both stability and repeatability.” 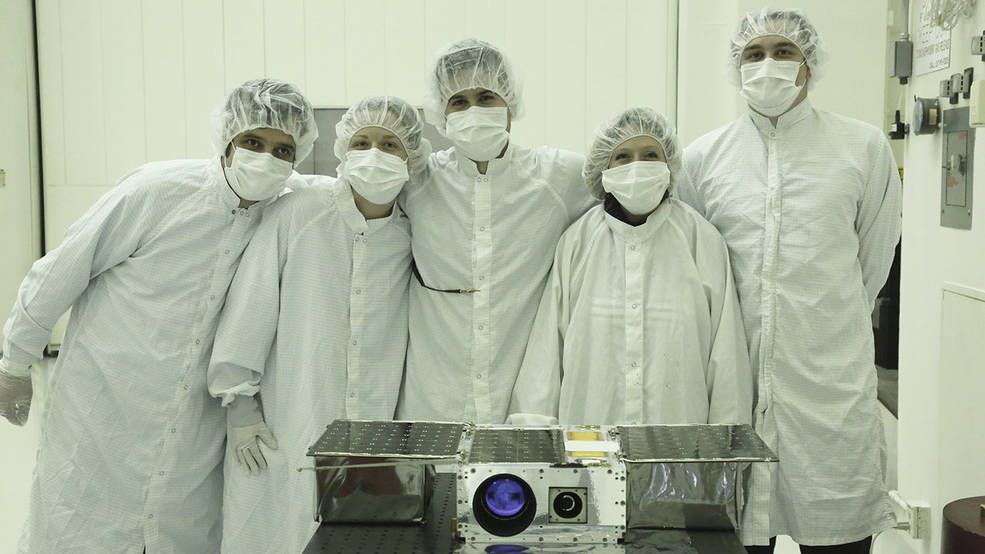 Members of the ASTERIA team prepare the petite satellite for its journey to space (from left to right: Robert Bocchino, Amanda Donner, Cody Colley, Alessandra Babuscia, and Peter Di Pasquale).
Credits: NASA/JPL-Caltech
The payload also employed a control system to reduce “noise” in the data created by temperature fluctuations in the satellite, another major hurdle for an instrument attempting to carefully monitor stellar brightness. During observations, the temperature of the controlled section of the detector fluctuates by less than 0.02 Fahrenheit (0.01 Kelvin, or 0.01 degree Celsius).
Small satellites
ASTERIA is a CubeSat, a type of small satellite consisting of “units” that are 10 centimeters cubed, or about 4 inches on each side. ASTERIA is the size of six CubeSat units, making it roughly 10 centimeters by 20 centimeters by 30 centimeters. With its two solar panels unfolded, the satellite is about as long as a skateboard.
The ASTERIA mission utilized commercially available CubeSat hardware where possible, and is contributing to a general knowledge of how those components operate in space.
“We’re continuing to characterize CubeSat components that other missions are using or want to use,” said Amanda Donner, mission assurance manager for ASTERIA at JPL.
ASTERIA launched to the International Space Station in August 2017. Having been in space for more than 140 days, the satellite is operating on an extended mission through May.
ASTERIA was developed under the Phaeton Program at JPL. Phaeton provides early-career hires, under the guidance of experienced mentors, with the challenges of a flight project. ASTERIA is a collaboration with the Massachusetts Institute of Technology in Cambridge; where Sara Seager is the principal investigator.
Calla CofieldJet Propulsion Laboratory, Pasadena, Calif.818-393-1821Calla.e.cofield@jpl.nasa.gov
2018-072
Editor: Tony Greicius
Publicado por salud equitativa en 13:31