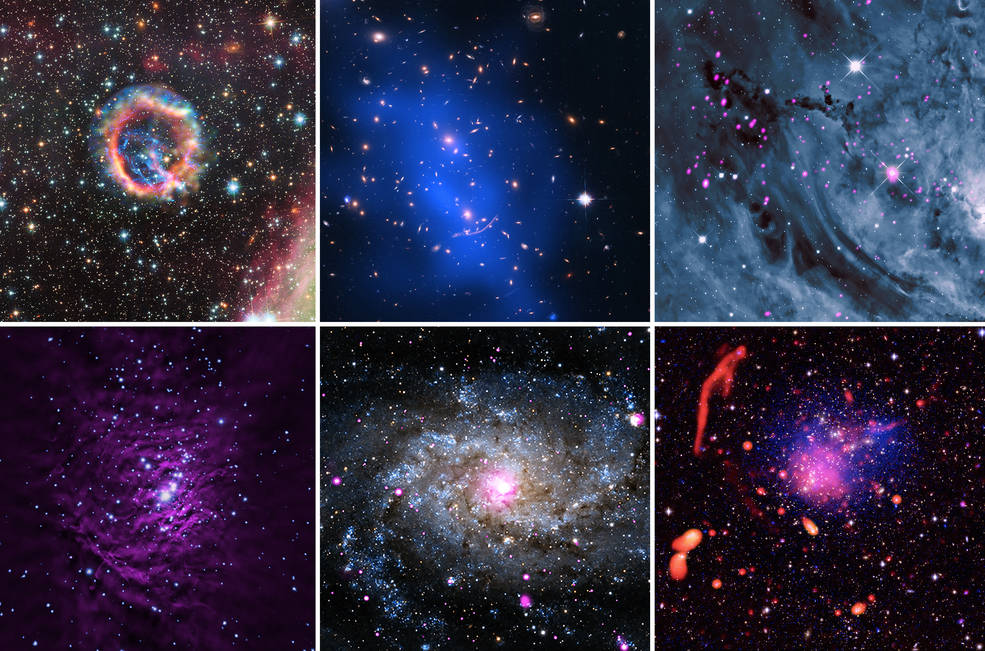 Credits: NASA/CXC/SAO
This is the season of celebrating, and the Chandra X-ray Center has prepared a platter of cosmic treats from NASA’s Chandra X-ray Observatory. This selection represents different types of objects -- from relatively nearby exploded stars to extremely distant and massive clusters of galaxies -- that emit X-rays detected by Chandra. Each image in this collection blends data from Chandra with observations from other telescopes, creating a colorful medley of light from our universe.
Top row (left to right):
E0102-72.3: This supernova remnant was produced by a massive star that exploded in a nearby galaxy called the Small Magellanic Cloud. X-rays from Chandra (blue and purple) have helped astronomers confirm that most of the oxygen in the universe is synthesized in massive stars.  The amount of oxygen in the E0102-72.3 ring shown here is enough for thousands of solar systems. This image also contains optical data from NASA’s Hubble Space Telescope and the Very Large Telescope in Chile (red and green).
Abell 370: Located about 4 billion light-years from Earth, Abell 370 is a galaxy cluster containing several hundred galaxies. Galaxy clusters are the largest objects in the universe held together by gravity.  In addition to individual galaxies, clusters contain vast amounts of multimillion-degree gas that emits X-rays, and dark matter that supplies most of the gravity of the cluster, yet does not produce any light. Chandra reveals the hot gas (diffuse blue regions) in a combined image with optical data from Hubble (red, green, and blue).
Messier 8: Also known as NGC 6523 or the Lagoon Nebula, Messier 8 is a giant cloud of gas and dust where stars are currently forming. At a distance of about 4,000 light years from Earth, Messier 8 provides astronomers an excellent opportunity to study the properties of very young stars. Many infant stars give off copious amounts of high-energy light including X-rays, which are seen in the Chandra data (pink). The X-ray data have been combined with an optical image of Messier 8 from the Mt. Lemmon Sky Center in Arizona (pale blue and white).
Bottom row (left to right):
Orion Nebula: Look just below the middle of the three stars of “belt” in the constellation Orion to find the Orion Nebula – to your unaided eyes, it appears as a small fuzzy dot. With a powerful telescope like Chandra, however, the view is much different. In this image, X-rays from Chandra (blue) reveal individual young stars, which are hot and energetic. When combined with radio emission from the NSF’s Very Large Array (purple), a vista of this stellar nursery is revealed.
Messier 33: The Triangulum Galaxy, a.k.a., Messier 33, is a spiral galaxy about 3 million light-years from Earth. It belongs to the Local Group of galaxies that includes the Milky Way and Andromeda galaxies. Chandra’s X-ray data (pink) reveal neutron stars and black holes that are pulling material from a companion star, while an optical image from the Subaru telescope in Hawaii (red, green, and blue) shows the majestic arms of this spiral galaxy that in many ways is a cousin to our own Milky Way.
Abell 2744: This composite image contains the aftermath of a giant collision involving four separate galaxy clusters at a distance of about 3.5 billion light-years. Officially known as Abell 2744, this system is also called “Pandora’s Cluster” because of the different structures found within it. This view of Abell 2744 contains X-ray data from Chandra (blue) showing hot gas, optical data from Subaru and the VLT (red, green and blue), and radio data from the NSF's Karl G. Jansky Very Large Array (red). Most of the cluster’s mass is invisible dark matter.
NASA's Marshall Space Flight Center in Huntsville, Alabama, manages the Chandra program for NASA's Science Mission Directorate in Washington. The Smithsonian Astrophysical Observatory in Cambridge, Massachusetts, controls Chandra's science and flight operations.
Read more from NASA's Chandra X-ray Observatory.
For more Chandra images, multimedia and related materials, visit:
http://www.nasa.gov/chandra
Editor: Lee Mohon
Publicado por salud equitativa en 12:30