to the Evolution of Universe

and Search for Life

A compilation of scientific results from The Stratospheric Observatory for Infrared Astronomy, SOFIA, reveal new clues to how stars form and galaxies evolve, and closer to understanding the environment of Europa and its subsurface ocean. The airborne observatory carries a suite of instruments, each sensitive to different properties of infrared light, that gives astronomers insights into the flow of matter in galaxies.
“Much of the light in the universe is emitted as infrared light that does not reach Earth’s surface,” said Bill Reach, chief science advisor at the University Space Research Association’s SOFIA Science Center. “Infrared observations from SOFIA, which flies above most of the atmosphere, let us study what’s happening deep inside cosmic clouds, analyze celestial magnetic fields and investigate the chemical universe in ways that are not possible with visible light.”
Unlike space-based telescopes, SOFIA’s instruments can be exchanged, serviced or upgraded to harness new technologies. Its newest instrument, called the High-resolution Airborne Wideband Camera-Plus, or HAWC+, enables studies of celestial magnetic fields with ground-breaking precision.
“How magnetic fields affect the process of star formation has not been well understood, though it has long been suspected that they play an important role,” said David Chuss, professor of physics at Villanova University in Pennsylvania. “With SOFIA’s HAWC+ instrument, we can now begin to understand how these fields influence the dynamics of regions where gas and dust are collapsing to produce new stars." 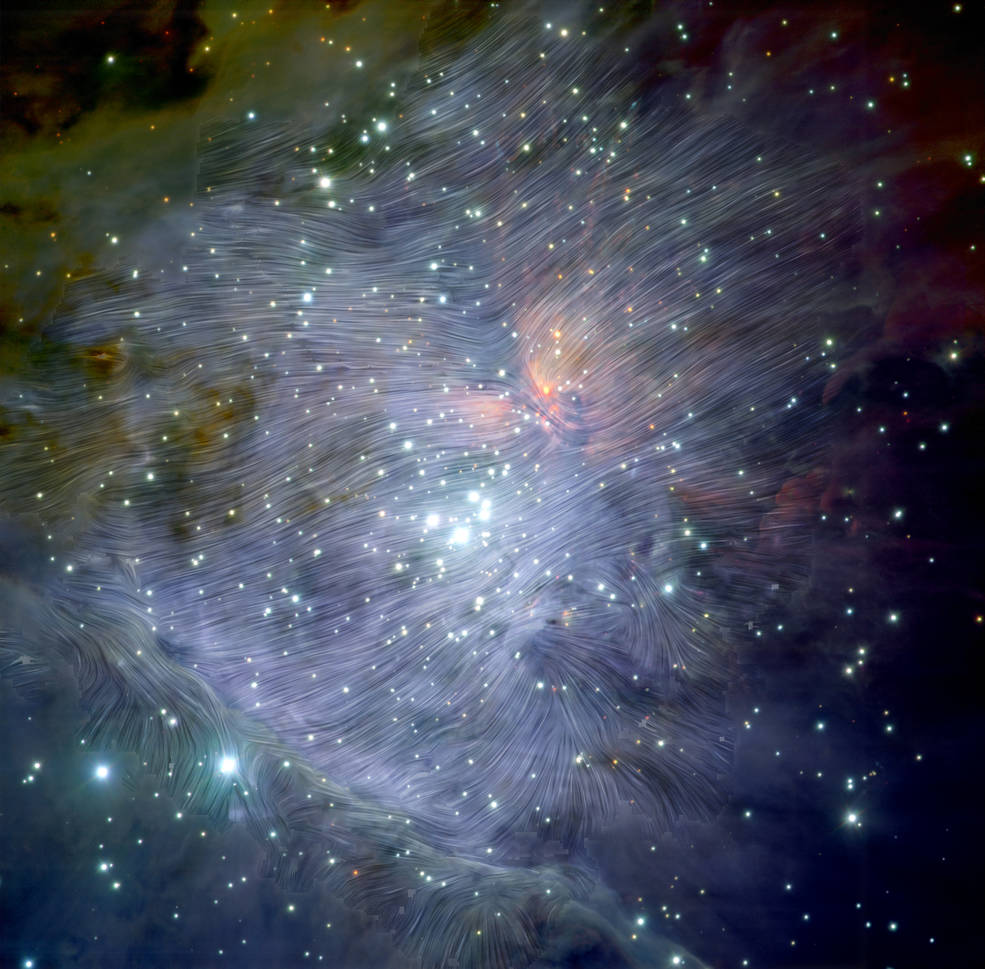 Magnetic fields in the Orion Nebula, shown as stream lines over an infrared image taken by the Very Large Telescope in Chile, are regulating the formation of new stars. SOFIA’s HAWC+ instrument is sensitive to the alignment of dust grains, which line up along magnetic fields, letting researchers infer the direction and strength.
Credits: NASA/SOFIA/D. Chuss et al. and European Southern Observatory/M.McCaughrean et al.
Some observations highlighted in the Astrophysical Journal “Focus on Results from SOFIA” include:
SOFIA is a Boeing 747SP jetliner modified to carry a 106-inch diameter telescope. It is a joint project of NASA and the German Aerospace Center, DLR. NASA’s Ames Research Center in California’s Silicon Valley manages the SOFIA program, science and mission operations in cooperation with the Universities Space Research Association headquartered in Columbia, Maryland, and the German SOFIA Institute (DSI) at the University of Stuttgart. The aircraft is maintained and operated from NASA’s Armstrong Flight Research Center Hangar 703, in Palmdale, California.
Editor: Kassandra Bell
Publicado por salud equitativa en 12:25