In this image, numerous sweeping arcs seem to congregate at various bright regions. You may wonder: What is being shown? Air traffic routes? Information moving around the global internet? Magnetic fields looping across active areas on the Sun?
In fact, this is a map of the entire sky in X-rays recorded by NASA’s Neutron star Interior Composition Explorer (NICER), a payload on the International Space Station. NICER’s primary science goals require that it target and track cosmic sources as the station orbits Earth every 93 minutes. But when the Sun sets and night falls on the orbital outpost, the NICER team keeps its detectors active while the payload slews from one target to another, which can occur up to eight times each orbit.
The map includes data from the first 22 months of NICER’s science operations. Each arc traces X-rays, as well as occasional strikes from energetic particles, captured during NICER’s night moves. The brightness of each point in the image is a result of these contributions as well as the time NICER has spent looking in that direction. A diffuse glow permeates the X-ray sky even far from bright sources. 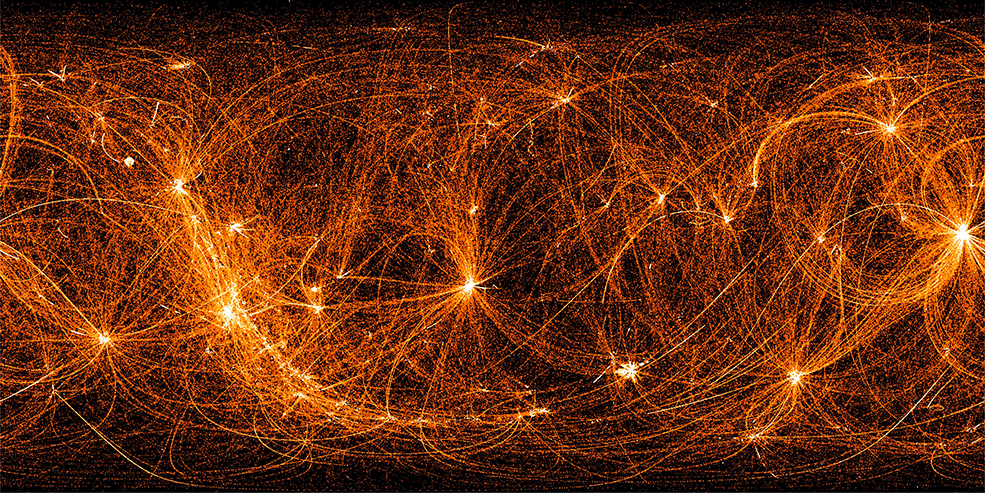 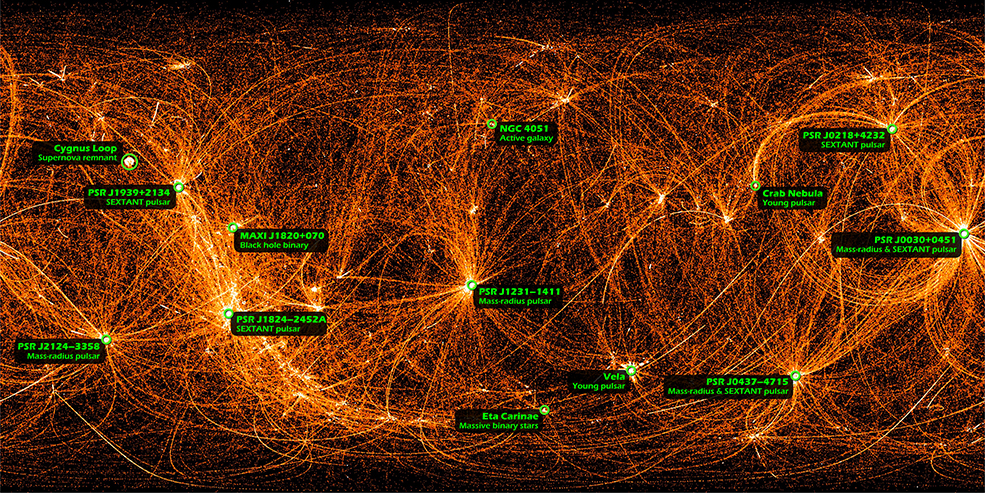 Show only LeftShow only Right
This image of the whole sky shows 22 months of X-ray data recorded by NASA's Neutron star Interior Composition Explorer (NICER) payload aboard the International Space Station during its nighttime slews between targets. Use the slider to identify prominent sources. NICER frequently observes targets best suited to its core mission (“mass-radius” pulsars) and those whose regular pulses are ideal for the Station Explorer for X-ray Timing and Navigation Technology (SEXTANT) experiment. One day they could form the basis of a GPS-like system for navigating the solar system.
Credits: NASA/NICER
Download full-resolution images from NASA Goddard’s Scientific Visualization Studio
The prominent arcs form because NICER often follows the same paths between targets. The arcs converge on bright spots representing NICER’s most popular destinations — the locations of important X-ray sources the mission regularly monitors.
“Even with minimal processing, this image reveals the Cygnus Loop, a supernova remnant about 90 light-years across and thought to be 5,000 to 8,000 years old,” said Keith Gendreau, the mission’s principal investigator at NASA’s Goddard Space Flight Center in Greenbelt, Maryland. “We’re gradually building up a new X-ray image of the whole sky, and it’s possible NICER’s nighttime sweeps will uncover previously unknown sources.”
NICER’s primary mission is to determine the size of dense remains of dead stars called neutron stars — some of which we see as pulsars — to a precision of 5%. These measurements will finally allow physicists to solve the mystery of what form of matter exists in their incredibly compressed cores. Pulsars, rapidly spinning neutron stars that appear to “pulse” bright light, are ideally suited to this “mass-radius” research and are some of NICER’s regular targets.
Other frequently visited pulsars are studied as part of NICER's Station Explorer for X-ray Timing and Navigation Technology (SEXTANT) experiment, which uses the precise timing of pulsar X-ray pulses to autonomously determine NICER’s position and speed in space. It’s essentially a galactic GPS system. When mature, this technology will enable spacecraft to navigate themselves throughout the solar system — and beyond.
By Francis ReddyNASA's Goddard Space Flight Center, Greenbelt, Md.
Media contact: Claire AndreoliNASA's Goddard Space Flight Center, Greenbelt, Md.
Editor: Rob Garner
Publicado por salud equitativa en 8:21