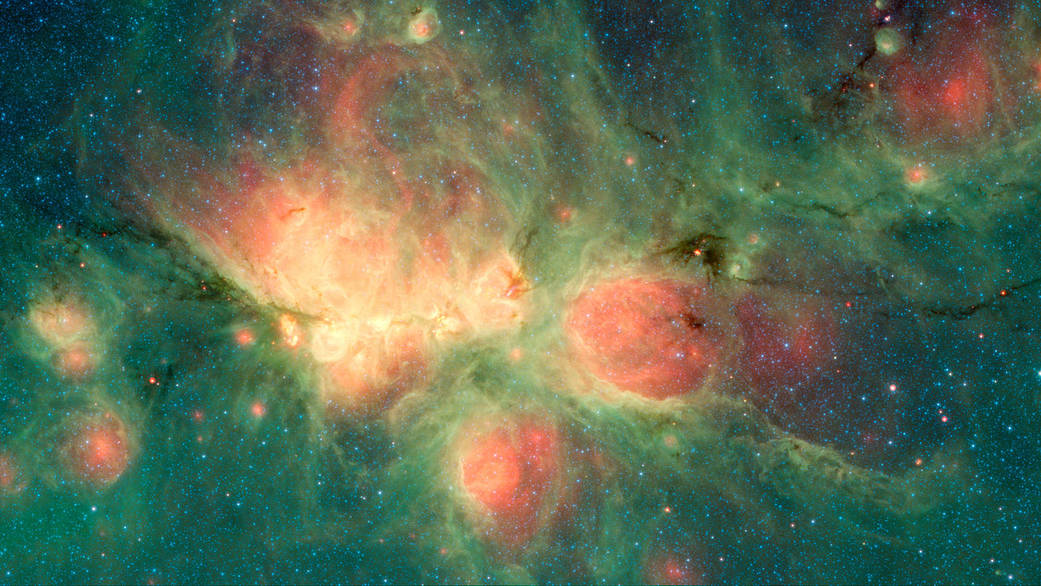 This image from NASA's Spitzer Space Telescope shows the Cat's Paw Nebula, so named for the large, round features that create the impression of a feline footprint. The nebula is a star-forming region in the Milky Way galaxy, located in the constellation Scorpius. Estimates of its distance from Earth range from about 4,200 to about 5,500 light-years.
Framed by green clouds, the bright red bubbles are the dominant feature in the image, which was created using data from two of Spitzer's instruments. After gas and dust inside the nebula collapse to form stars, the stars may in turn heat up the pressurized gas surrounding them, causing it to expand into space and create bubbles.
The green areas show places where radiation from hot stars collided with large molecules called "polycyclic aromatic hydrocarbons," causing them to fluoresce.
In some cases, the bubbles may eventually "burst," creating the U-shaped features that are particularly visible in the image below, which was created using data from just one of Spitzer's instruments. 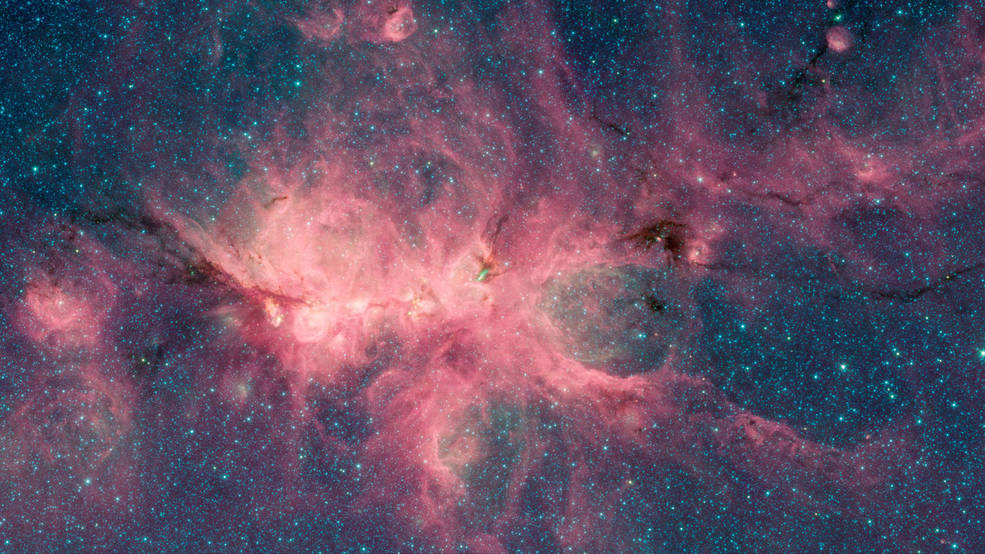 The Cat's Paw Nebula, imaged here by NASA's Spitzer Space Telescope using the IRAC instrument, is a star-forming region inside the Milky Way Galaxy. The dark filament running through the middle of the nebula is a particularly dense region of gas and dust.
Credits: NASA/JPL-Caltech
Spitzer is an infrared telescope, and infrared light is useful to astronomers because it can penetrate thick clouds of gas and dust better than optical light (the kind visible to the human eye). The black filaments running horizontally through the nebula are regions of gas and dust so dense, not even infrared light can pass through them. These dense regions may soon be sites where another generation of stars will form.
The Cat's Paw star-forming region is estimated to be between 24 and 27 parsecs (80 and 90 light years) across. It extends beyond the left side of these images and intersects with a similar-sized star-forming region, NGC 6357. That region is also known as the Lobster Nebula – an unlikely companion for a cat.
The top image was compiled using data from the Infrared Array Camera (IRAC) and the Multiband Imaging Photometer (MIPS) aboard Spitzer. MIPS collects an additional "color" of light in the infrared range, which reveals the red-colored features, created by dust that has been warmed by the hot gas and the light from nearby stars. The second image is based on data from IRAC alone, so this dust is not visible.
The images were pulled from data collected for the Galactic Legacy Mid-Plane Survey Extraordinaire project (GLIMPSE). Using data from Spitzer, GLIMPSE created the most accurate map ever of the large central bar of the galaxy and showed that the galaxy is riddled with gas bubbles like those seen here.
More information about Spitzer is available at the following sites:
http://www.spitzer.caltech.edu/
https://irsa.ipac.caltech.edu/data/SPITZER/GLIMPSE/overview.html
Media Relations Contact
Calla CofieldJet Propulsion Laboratory, Pasadena, Calif.626-808-2469calla.e.cofield@jpl.nasa.gov
Editor: Jon Nelson
Publicado por salud equitativa en 12:34