'Space Butterfly' Is Home to Hundreds of Baby Stars | NASA

'Space Butterfly' Is Home to Hundreds of Baby Stars | NASA

to Hundreds of Baby Stars 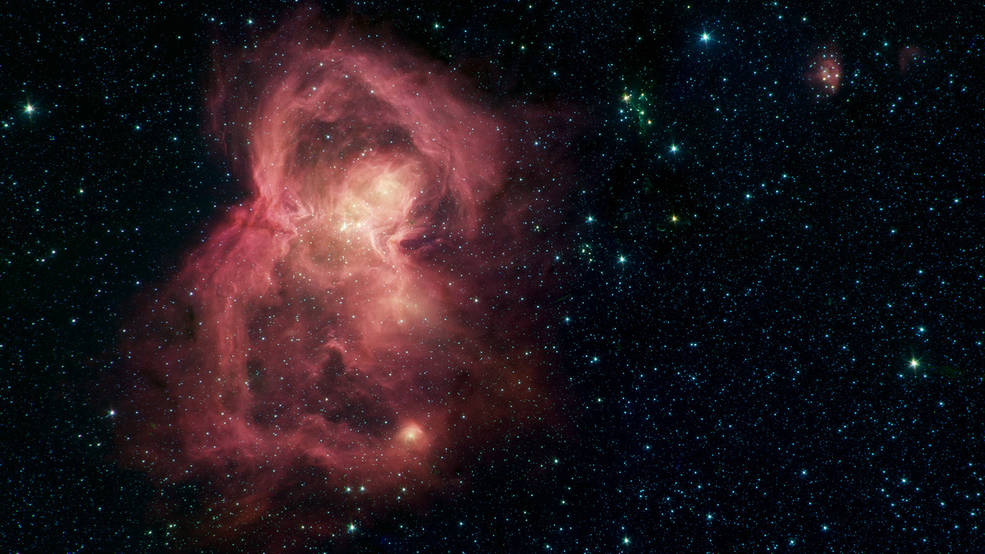 Officially known as W40, this red butterfly in space is a nebula, or a giant cloud of gas and dust. The "wings" of the butterfly are giant bubbles of gas being blown from the inside out by massive stars.
Credits: NASA/JPL-Caltech
Full image and caption
What looks like a red butterfly in space is in reality a nursery for hundreds of baby stars, revealed in this infrared image from NASA's Spitzer Space Telescope. Officially named Westerhout 40 (W40), the butterfly is a nebula — a giant cloud of gas and dust in space where new stars may form. The butterfly's two "wings" are giant bubbles of hot, interstellar gas blowing from the hottest, most massive stars in this region.
Besides being beautiful, W40 exemplifies how the formation of stars results in the destruction of the very clouds that helped create them. Inside giant clouds of gas and dust in space, the force of gravity pulls material together into dense clumps. Sometimes these clumps reach a critical density that allows stars to form at their cores. Radiation and winds coming from the most massive stars in those clouds — combined with the material spewed into space when those stars eventually explode — sometimes form bubbles like those in W40. But these processes also disperse the gas and dust, breaking up dense clumps and reducing or halting new star formation.
The material that forms W40's wings was ejected from a dense cluster of stars that lies between the wings in the image. The hottest, most massive of these stars, W40 IRS 1a, lies near the center of the star cluster. W40 is about 1,400 light-years from the Sun, about the same distance as the well-known Orion nebula, although the two are almost 180 degrees apart in the sky. They are two of the nearest regions in which massive stars — with masses upwards of 10 times that of the Sun — have been observed to be forming.
Another cluster of stars, named Serpens South, can be seen to the upper right of W40 in this image. Although both Serpens South and the cluster at the heart of W40 are young in astronomical terms (less than a few million years old), Serpens South is the younger of the two. Its stars are still embedded within their cloud but will someday break out to produce bubbles like those of W40. Spitzer has also produced a more detailed image of the Serpens South cluster.
A mosaic of Spitzer's observation of the W40 star-forming region was originally published as part of the Massive Young stellar clusters Study in Infrared and X-rays (MYStIX) survey of young stellar objects.
The Spitzer picture is composed of four images taken with the telescope's Infrared Array Camera (IRAC) during Spitzer's prime mission, in different wavelengths of infrared light: 3.6, 4.5, 5.8 and 8.0 μm (shown as blue, green, orange and red). Organic molecules made of carbon and hydrogen, called polycyclic aromatic hydrocarbons (PAHs), are excited by interstellar radiation and become luminescent at wavelengths near 8.0 microns, giving the nebula its reddish features. Stars are brighter at the shorter wavelengths, giving them a blue tint. Some of the youngest stars are surrounded by dusty disks of material, which glow with a yellow or red hue.
The Jet Propulsion Laboratory in Pasadena, California, manages the Spitzer Space Telescope mission for NASA's Science Mission Directorate in Washington. Science operations are conducted at the Spitzer Science Center at Caltech in Pasadena. Space operations are based at Lockheed Martin Space Systems in Littleton, Colorado. Data are archived at the Infrared Science Archive housed at IPAC at Caltech. Caltech manages JPL for NASA.
More information on Spitzer can be found at its website:
http://www.spitzer.caltech.edu/
Calla CofieldJet Propulsion Laboratory, Pasadena, Calif.626-808-2469calla.e.cofield@jpl.nasa.gov
2019-050
Editor: Tony Greicius
Publicado por salud equitativa en 12:25