29th Anniversary with a

Colorful Look at the 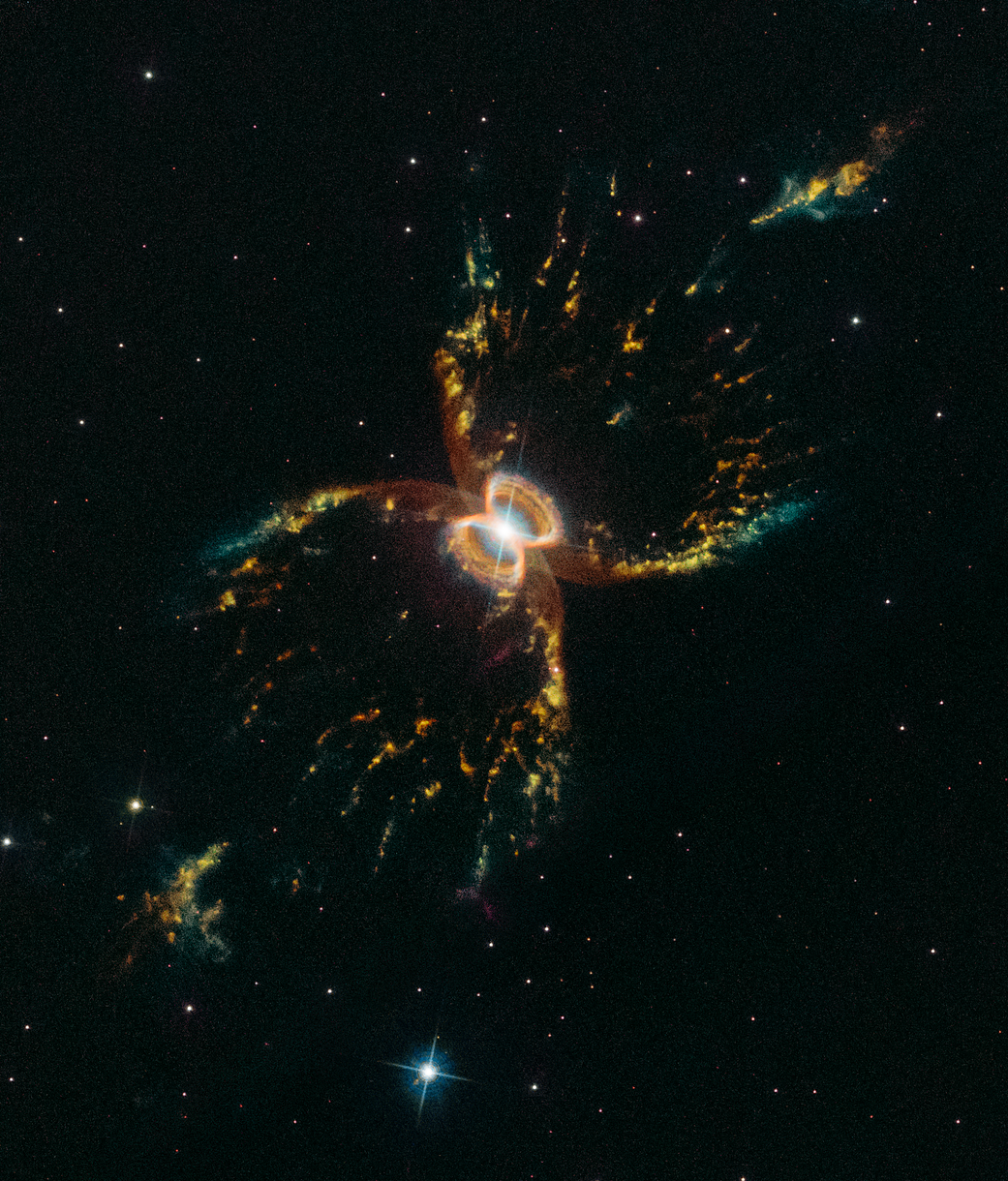 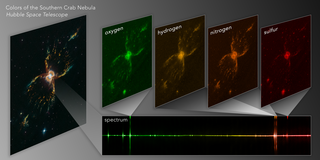 This diagram illustrates how Hubble Space Telescope spectral observations were used to study the chemical makeup of the Southern Crab Nebula. Energized by radiation from the pair of bright stars, each of these elements glows in specific colors of light corresponding to hydrogen, sulfur, oxygen, and nitrogen.
Credits: NASA, ESA, and J. DePasquale (STScI) 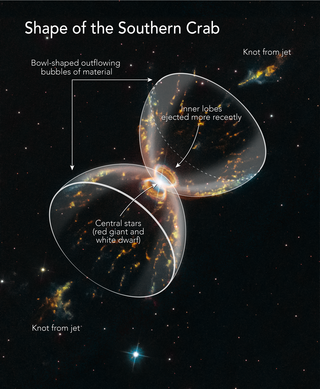 This diagram traces the hourglass structure formed by a pair of huge, bipolar gas bubbles ejected by a double star in the center of the Southern Crab Nebula. The gases are dispersed too thinly for the full shape of the hourglass to be photographed. Instead, the bubbles appear brightest at the edges, giving the illusion of crab leg structures. The stars are likely embedded inside a disk of material that constricts and directs the outflow of gas from the system. This disk apparently also launched twin jets of material that form knots far outside the system as they slam into interstellar material.
Credits: NASA, ESA, and A. Feild (STScI)
In celebration of the 29th anniversary of the launch of NASA's Hubble Space Telescope, astronomers captured this festive, colorful look at the tentacled Southern Crab Nebula.
The nebula, officially known as Hen 2-104, is located several thousand light-years from Earth in the southern hemisphere constellation of Centaurus. It appears to have two nested hourglass-shaped structures that were sculpted by a whirling pair of stars in a binary system. The duo consists of an aging red giant star and a burned-out star, a white dwarf. The red giant is shedding its outer layers. Some of this ejected material is attracted by the gravity of the companion white dwarf.
The result is that both stars are embedded in a flat disk of gas stretching between them. This belt of material constricts the outflow of gas so that it only speeds away above and below the disk. The result is an hourglass-shaped nebula.
The bubbles of gas and dust appear brightest at the edges, giving the illusion of crab leg structures. These "legs" are likely to be the places where the outflow slams into surrounding interstellar gas and dust, or possibly material which was earlier lost by the red giant star.
The outflow may only last a few thousand years, a tiny fraction of the lifetime of the system. This means that the outer structure may be just thousands of years old, but the inner hourglass must be a more recent outflow event. The red giant will ultimately collapse to become a white dwarf. After that, the surviving pair of white dwarfs will illuminate a shell of gas called a planetary nebula.
The object was first reported in the late 1960s, but was assumed to be an ordinary star. In 1989, astronomers used the European Southern Observatory's La Silla Observatory in Chile to photograph a roughly crab-shaped extended nebula, formed by symmetrical bubbles.
These early observations only showed the outer hourglass emanating from a bright central region. Hubble photographed the Southern Crab in 1999 to reveal complicated nested structures. These latest images were taken in March 2019 with a wide set of color filters on Hubble's newest, sharpest detector, Wide Field Camera 3. This image is a composite of observations taken in various colors of light that correspond to the glowing gases in the nebula. Red is sulfur, green is hydrogen, orange is nitrogen, and blue is oxygen.
Hubble launched on April 24, 1990, aboard the space shuttle Discovery. From its perch high above the distorting effects of Earth's atmosphere, Hubble observes the universe in near-ultraviolet, visible, and near-infrared light. Over the past 29 years, the space telescope's breakthrough discoveries have revolutionized nearly all fields of astronomy and astrophysics. Among Hubble's landmark accomplishments include making the deepest views ever taken of the evolving universe, finding planet-forming disks around nearby stars, chemically probing the atmospheres of planets orbiting other stars, identifying the first supermassive black hole in the heart of a neighboring galaxy, and providing evidence of an accelerating universe, propelled perhaps by some unknown source of energy in the fabric of space.
The Hubble Space Telescope is a project of international cooperation between NASA and ESA (European Space Agency). NASA's Goddard Space Flight Center in Greenbelt, Maryland, manages the telescope. The Space Telescope Science Institute (STScI) in Baltimore, Maryland, conducts Hubble science operations. STScI is operated for NASA by the Association of Universities for Research in Astronomy in Washington, D.C.
Credit: NASA, ESA, and STScI
For images, video, and more information about the Southern Crab Nebula and Hubble, visit:
http://hubblesite.org/news_release/news/2019-15
www.nasa.gov/hubble
www.spacetelescope.org/news/heic1907
Contact:
Ray VillardSpace Telescope Science Institute, Baltimore, Maryland410-338-4514villard@stsci.edu
Editor: Karl Hille
Publicado por salud equitativa en 12:22