This is an artist’s impression of supernova 1993J, which exploded in the galaxy M81. Using the Hubble Space Telescope, astronomers have identified the blue helium-burning companion star, seen at the center of the expanding nebula of debris from the supernova.
Image Credit:
NASA, ESA, G. Bacon (STScI)


Using NASA’s Hubble Space Telescope, astronomers have discovered a companion star to a rare type of supernova. The discovery confirms a long-held theory that the supernova, dubbed SN 1993J, occurred inside what is called a binary system, where two interacting stars caused a cosmic explosion.
"This is like a crime scene, and we finally identified the robber," said Alex Filippenko, professor of astronomy at University of California (UC) at Berkeley. "The companion star stole a bunch of hydrogen before the primary star exploded."
SN 1993J is an example of a Type IIb supernova, unusual stellar explosions that contains much less hydrogen than found in a typical supernova.  Astronomers believe the companion star took most of the hydrogen surrounding the exploding main star and continued to burn as a super-hot helium star.
“A binary system is likely required to lose the majority of the primary star’s hydrogen envelope prior to the explosion. The problem is that, to date, direct observations of the predicted binary companion star have been difficult to obtain since it is so faint relative to the supernova itself,” said lead researcher Ori Fox of UC Berkeley.
SN 1993J resides in the Messier 81 galaxy, about 11 million light-years away in the direction of Ursa Major, the Great Bear constellation. Since its discovery 21 years ago, scientists have been looking for the companion star. Observations at the W. M. Keck Observatory on Mauna Kea, Hawaii, suggested that the missing companion star radiated large amounts of ultraviolet (UV) light, but the area of the supernova was so crowded that scientists could not be sure they were measuring the right star.
The team combined optical light data and Hubble’s UV light images to construct a spectrum that matched the predicted glow of a companion star, also known as the continuum emission. Scientists were only recently able to directly detect this light.
“We were able to get that UV spectrum with Hubble. This conclusively shows that you have an excess of continuum emission in the UV, even after the light from other stars has been subtracted,” said Azalee Bostroem of the Space Telescope Science Institute (STScI) in Baltimore, Maryland.
Astronomers estimate a supernova occurs once every second somewhere in the universe, yet they don’t fully understand how stars explode. Further research will help astronomers better understand the properties of this companion star and the different types of supernovae.
The results of this study were published in the July 20 issue of the Astrophysical Journal.
The Hubble Space Telescope is a project of international cooperation between NASA and the European Space Agency. NASA's Goddard Space Flight Center in Greenbelt, Maryland, manages the telescope, while STScI conducts science operations. STScI is operated for NASA by the Association of Universities for Research in Astronomy, Inc., in Washington.
For images and more information about Hubble, visit: 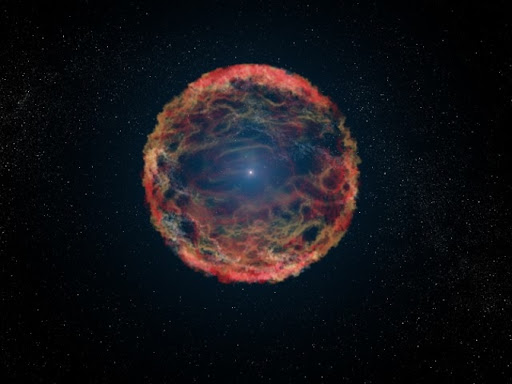